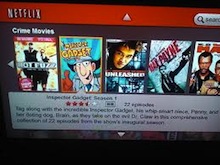 Tennessee lawmakers have passed a law, since signed by the state’s governor, which would make it a crime to use a friend’s password to login to Netflix, MOG, or a similar web-based media consumption service, even with that friend’s permission. Why Tennessee? Because Nashville is the capital not only of the state, but of the country music industry, which, like the broader music industry, is worried about revenue loss from illegal file-sharing. The law passed has the support of the country music industry and the RIAA.

While the law isn’t specifically aimed at the practice of friendly password-sharing — lawmakers say its target is ‘hackers and thieves who sell passwords in bulk’ — they acknowledge that it would apply to Netflix password-pooling. And the penalties aren’t nothing: “Stealing $500 or less of entertainment would be a misdemeanor punishable by up to a year in jail and a fine of $2,500.”

The likelihood of small-scale detection may be another matter, however:

Bill Ramsey, a Nashville lawyer who practices both entertainment law and criminal defense, said that he doubts the law would be used to ban people in the same household from sharing subscriptions, and that small-scale violations involving a few people would, in any case, be difficult to detect. But “when you start going north of 10 people, a prosecutor might look and say, `Hey, you knew it was stealing,'” Ramsey said.