Give Me Movie Lesbians Who Aren’t White and Exist in the Present Day, Please 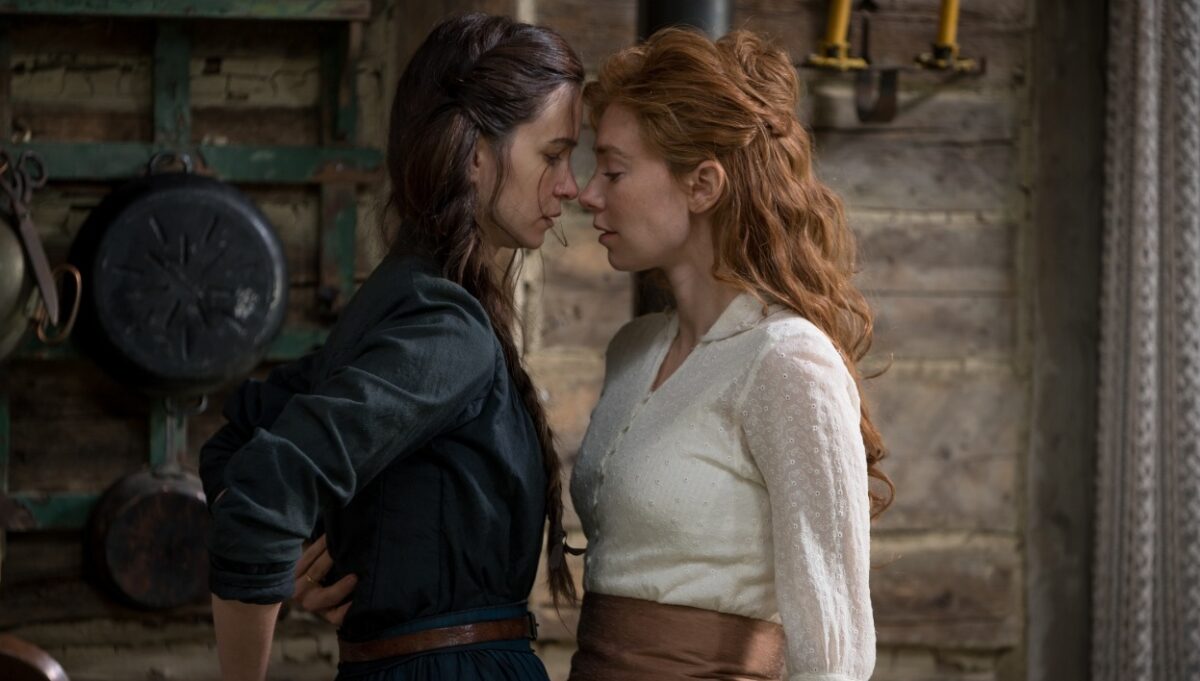 Stop me if you’ve heard this one: a stone-faced, dour brunette in a brutal landscape broods and works until a lighter haired and gentler woman breaks through her barriers. Together they embark on a forbidden love story that will never see a happy ending because the only future for women is heterosexual marriage and it’s just impossible to be happy and queer in the past. No, this isn’t about Portrait of a Lady on Fire. Or Ammonite. It’s about the latest entry in the sad white period lesbians genre: The World to Come.

The trailer for The World to Come dropped yesterday and even though the film looks compelling on its own, my first response to it was … exhaustion at another entry in the growing subgenre of movies about queer women that focus only on women in an extremely white past caught up in stories of desperate longing and loneliness. The jokes that emerge online are easy: “let lesbians have electricity” etcetera, but they cover up anger at a trend that itself exposes the limited way queer women in queer stories are allowed to exist on movie screens. It would appear that we are only allowed to be white, depressed, and we never get a happy ending.

To be clear this trend doesn’t diminish the actual quality of the films it encompasses. I’m not saying these movies are bad (the two I have seen are excellent), I just wish they weren’t the only kind Hollywood seems willing to make right now about queer women. The pattern arguably started with Portrait of a Lady on Fire, a film I absolutely adored. That film did many things right and was uniquely special because it was written and directed by a queer woman, Céline Sciamma, and starred at least one out queer woman, Adèle Haenel (I can’t determine if Noémie Merlant identifies as queer). The value of seeing a story about queer women being told by queer women cannot be overstated, because it’s one thing that the subsequent Portrait copycats lacks.

Perhaps “copycats” is not the right word. Maybe “echoes” is more appropriate, as these films feel as if they tell a similar story just slightly diminished in each reiteration. Ammonite, another film I enjoyed very much, told the same sort of story, and did it beautifully, but it was written and directed by a man, Francis Lee, and starred two straight actresses, Kate Winslet and Saoirse Ronan.

And now we have The World to Come, which was written by two men (Ron Hansen and Jim Shepard), directed by a woman, Mona Fastvold, who is straight/not out as far as I can tell. The World to Come stars Vanessa Kirby and Katherine Waterston, who are both publically straight. And let’s not forget that we have alleged abuser Casey Affleck as a co-star and producer in a film about abuse.

So we have straight or male people telling these stories of queer women now, which are getting attention and praise, and that alone is frustrating. It makes me feel like people are taking our stories and the fertile ground of lesbian longing to make their own films without uplifting actual queer women along the way. All these stories are set in the past and it feels like that’s the case since that’s a good excuse to show queer pain, because apparently modern queer women with all our joy and triumph are not exciting if we’re not suffering. But there were countless triumphant queer relationships in the past that also do not receive attention.

And then there’s the overwhelming whiteness of these films. Not only is Hollywood elevating stories that relegate queer women to the detached, depressing land of the past, but they are also often erasing queer women of color entirely. Even in the one modern-day set queer female movie we were gifted recently, Happiest Season, it was an almost entirely white story and it was dated in its focus on the closet. The deafening message is that queer women of color don’t get to see themselves represented in film. Nor do disabled queer women. Heck, we barely even see women who aren’t considered conventionally attractive by impossible Hollywood body standards.

The message this film trend sends, despite the often excellent quality of the films that make it up, is that the queer female experience is one of misery and loneliness occasionally punctuated by a searing, doomed love affair. And even that experience is reserved for white, able-bodied, thin, cis women …  often played by straight actresses. This is depressing. I am a queer woman in a happy interracial relationship and I have never seen a couple on screen that looks like my wife and me. And I wish that would change.

When a film tells a story about a marginalized community, that’s important, because these stories build familiarity and empathy and give people something to identify with. The scarcity of these stories makes them even more important and puts even more pressure on them to be more: more inclusive, more supportive of actual queer people, and more focused on showing that queer life is not all longing and misery.

I hope that the chorus of people both joking about this trend and calling it out gets attention in the halls of Hollywood. Because these voices deserve to be heard, and the full spectrum of the queer experience deserves to be seen.