This 14-Year-Old Girl Will Build Her Own Car In Time For Her 16th Birthday, Thankyouverymuch 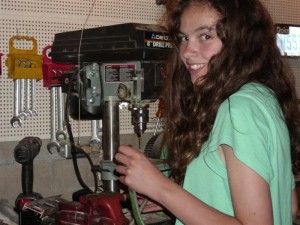 Meet Kathryn! Her last name is unknown because she’s generally only known on Pennock’s Fiero Forum as user Michhiker’s daughter. The family lives in Michigan, Mount Pleasant to be exact, and since the age of 12, Kathryn has shown a strong interest in cars. Well, a strong interest in buying and restoring her own Pontiac Fiero. By herself. Yeah, Kathryn isn’t interested in having Mommy and Daddy buy her a car for her 16th birthday — she’s going to go ahead and build one. Oh, kids and their crazy hobbies!

About two years ago, Kathryn — who is now 14 — approached her parents and asked them if she could use her babysitting money for a little project she wanted to undertake. That would be the car restoration. Not only did she have this idea planned out and prepared for a discussion with her parents, she had a nine-point argument, which her father shared on the forum:

1. She would like to buy a Fiero because she saw one at a show and thinks they are cool (we are Corvette people, so she has been around a few shows). Fair enough I like GM products and remember the Fiero fondly from my youth.
2. She makes the arguement that it gets reasonably good gas milage
3. It is relatively inexpensive, so she would be able to afford it.
4. She could completely restore it in the 4 years until she turns 16
5. She would learn about how cars work, it would be a cheap education for the money
6. She would only have the capacity to take one friend along with her, so there would be less distraction
7. She wants a manual so she would learn how to drive stick
8. When it is done it would be a cool historic sports car
9. She would pay for it all herself.

After two years of work, with minimal help from her father and uncle, the car has started to resemble an actual, drivable car! Jalopnik has also been tracking her progress via the Fiero forum, and they report that Kathryn went from “simple sanding and spray painting to sand blasting, welding, upholstery work and everything else she needs to do to make her car the coolest one in the high school lot in a couple of years.” And can you even imagine the bragging rights she’ll have when it’s all done?

Kathryn eventually started posting on the forum herself and revealed that indeed, it wasn’t the easiest project to start. Like welding, which she described as “terrifying” because of the whole “metal and sparks” thing (my quote, not hers). Though remember, she’s still in school, partaking in other activities in addition to building her Fiero, and that raises the ire of some people with less things to do with their time.

However, the response to Kathryn’s project has been immensely positive, with many people wishing their own teenagers had the same focus and motivation. While some lament that their own children have no interest in cars (this is a car forum, so these folks are bigger fans of cars than most people who just like to drive them from points A to B), some just wish their kids would do something, anything, amounting to the effort that Kathryn has been pursuing for two years now. (She even skipped soccer this spring to work on her car. I have a feeling she’ll be back.)

Now, people are even turning to Kathryn for car advice, something she finds pretty amazing:

“Okay this is new, people coming to ME for car stuff. Interesting, but I’ll give it my best shot … Thank you everyone for being so patient with me so just spread the word that I AM BACK!!! But literally I’m glad to be working on my car again, I’ve missed my baby (when I refer to my baby it’s my Fiero! Just to let you know).

Naturally, her father is beyond proud of his daughter and he’s quick to express it on the forum. Probably one reason Kathryn doesn’t visit the forum all that much. (“Oh, Dad…”)

So, now we’ll all sit back, evaluate what we’re all doing with our own spare time these days … and then feel dramatically unaccomplished. But congratulations, Kathryn! Keep up the good work!