This episode was great, and I don’t just say that because Shang Tsung from Mortal Kombat was a guest star. It’s only mostly that. FINISH HIM.

We start off with Chris Argent telling Isaac and Allison why (he thinks) he’s on the Demon Ninja’s shit list: For one of his first hunting jobs, Gerard sent Chris off to take down a demon who just so happened to be a yakuza boss, too, which Gerard didn’t warn Chris about because he’s Satan incarnate. I might’ve gotten some of the details wrong there because I was distracted by baby (well, 18 year old) Chris Argent’s spot-on casting. The demon ninjas showed up and killed just about everyone, including the yakuza dude. BB Chris shot one of the Demon Ninjas in the face, which didn’t kill it, but it did give Chris and another survivor, Katashi (aka Silverfinger), a chance to escape.

Katashi’s the only person Chris can think of who might know what the Demon Ninjas are, but he’s a big ol’ recluse, so Chris had to put one of his fancy historical guns up for sale to lure him into town. They don’t have much time, because when the sun goes down the Demon Ninjas are probably coming for Scott (or maybe Kira) again. Isaac’s all “WE HAVE TO SAVE SCOTT *hearts in my eyes*.”

Meanwhile Kira takes the news that her boyfriend is a werewolf pretty damn well. She touches his wolfed-out face, there are rainbows and puppies and kittens, and everything is unbearably cute but not in a way that’s so saccharine it makes me want to stab my eyes out and listen to death metal. Kira and Scott have that superpower.

At school the twins reveal that they’ve elected themselves Scott’s bodyguards. That’s… it’s… did the twins do something I approve of? Because them sticking by Scott so he has backup if the Demon Ninjas show up actually makes a lot of sense. The effect is somewhat diminished by the fact that Scott clearly doesn’t want to be bodyguarded, though. He goes off to tell Stiles about what went down at the rave, but he decides not to pile all that extra drama on him when Stiles reveals his “HOLYSHITITHINKITRIEDTOGETKIRAKILLED” panic. Only he has no proof, because someone stole the chemistry lab key back and erased the chemistry code from the blackboard (EVIL JANITOR. Or they were never there in the first place. I prefer the first thing). Scott tells Stiles that he doesn’t want to just brush off his friend’s concerns, but he honestly don’t think he tried to kill anyone, either.

And now for the COMPLETE AND UTTER ANTITHESIS OF SCOTT: Agent McDouchebag is talking with someone on the phone about how he can totes get the Sheriff fired, no problem (screw you and the horse you rode in on), when he opens his computer and sees that someone (*cough*EvilStiles*cough*) left a picture on his desktop of Kira and Scott trespassing in the evidence room.

Stiles has gone to the hospital, where Mama McCall proceeds to mother him big-time, giving him a sedative so he can sleep for more than a few hours. After she tucks him in, a half-asleep Stiles says “Thanks, mom.”

As if that’s not gut-wrenching and Tumblr-breaking enough, something about Stiles’ symptoms twig in Mama McCall’s memory. Turns out those exact same symptoms are on the chart of Barrow, the psycho killer whom Stiles suspects he has some sort of supernatural connection wi—wait. The other chart doesn’t belong to Barrow? It belongs to STILES’ MOM?!

I need a minute.

Kira and Scott ditch the twins by performing some minor vandalism on their motorcycles. At the time I thought it was a bit dumb—they are your bodyguards, Scott. But then Kira confronts Scott with the fact that the real reason he doesn’t want them around isn’t to get some alone time with her awesome self, but to make sure they don’t get hurt. Awwww. No, that’s not dumb. That’s Scott being Scott.

Oh, and Kira’s a kitsune, aka a Japanese fox demon. She updates Scott on his mythology using a book she Post-It noted up, and it’s just a small detail, but I love it. Research nerdery. There’s some cute banter (tails!), but it’s interrupted by Agent McDouchebag showing up and asking them why they were in his office. Scott tries to get him to leave without saying DEMON NINJAS ARE COMING WHEN THE SUN GOES DOWN, but it doesn’t work. Mama McCall shows up. Bye-bye sun…

… and a demon ninja stabs Agent McDoucebag through the chest. I am trying to summon a shit to give…

That’s when Derek leaps out of the shadows and starts messing the Demon Ninjas up. Turns out he’s been following Scott all day, albeit at a more discreet distance than when he used to glare at him from the edge of the lacrosse field. Awwww. He got subtle in his creepage.

The twins, who could take a few pages from Derek’s book when it comes to protecting Scott, leap from the shadows, and with their werewolf powers combined they manage to get the Demon Ninjas out on the porch, which lets Mama McCall trigger the Mountain Ash Home Security System (TM) Deaton set up.

While Scott, Kira, Derek, Mama McCall, and the twins are trapped in a house with a dying Agent McDouchebag, Chris, Isaac, and Allison are trying to bust into Katashi’s place. Their plan involves Isaac BAMFing it up in a suit and handling the gun sale, distracting Katashi’s people long enough for Chris and Allison to take out the guards. Isaac is freaking out, because—well, because it’s a high-pressure thing to have to do, and he’s never done anything like it before, and he’s not exactly burdened with a great amount of confidence because of his abusive father. Isaac puts on a front a lot of the times, with his sarcasm and his sassy scarves, but here we get to see him vulnerable. It’s a nice character moment. Allison’s all BE A MAN. SWIFT AS THE COURSING RIVER. WITH ALL THE FORCE OF A GREAT TYPHOON. She initiates some makeoutge and some gropage, which is enough to pull a The Sound of Music and give Isaac some confidence. Allison is magic.

Isaac does pretty well pretending to be a high-flying antique gun salesman, but Katashi has a pet werewolf too, and he figures out that something’s up and gets Isaac at clawpoint. But by that point Chris and Isaac have already gotten to Katashi’s (Cary-Hiroyuki Tagawa) office. Chris explains Heyyyyy, I don’t want to kill you. I actually saved your life once. I need any info you have on the Demon Ninjas and you weren’t picking up your cell. Shang Tsung Katashi explains that when the Demon Ninjas attacked he was actually going to run away, so Chris shooting one when he did meant that he didn’t lose his

The Demon Ninjas, Katashi explains, are called Oni. They’re basically unkillable. But the situation with Scott and Kira isn’t quite so dire as all that, because the Oni are looking for something specific—a type of evil kitsune called a nogitsune. The Oni are there to essentially go over Scott and Kira with a spiritual barcode scanner to make sure they’re devoid of evil spirits. Why won’t these teens just let them do their jobs?! Kira had thought she might be evil—Kira, have you met you?—but when the Oni bust through the mountain ash barrier and check her and Scott, both of them are cleared.

But then, of course, the evil one is Stiles. The Oni come after him in the hospital, and he—or his evil doppelganger, or his possessed self, or whatever—kills them. He kills them good. 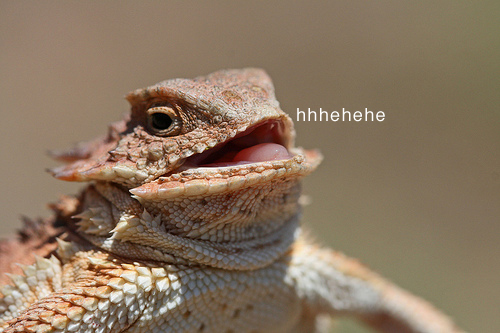