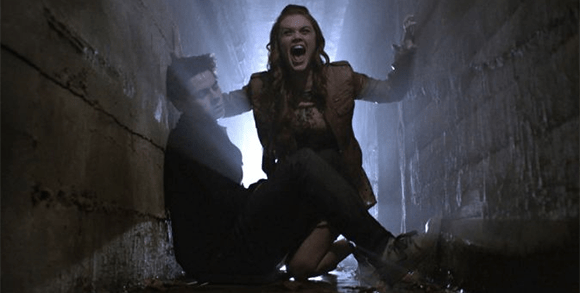 I don’t know what I’m writing right now. How am I supposed to recap an episode that DOESN’T EXIST in which there was a very big thing that DIDN’T HAPPEN?

For an episode that ended so horribly, it actually started in a pretty cool way—Deaton literally pulling mademon flies out of the twins and Isaac. Dude stuck his entire hand down the mouths of multiple werewolves like it wasn’t even a thing. Baller. While everyone else is freaking out over what the Nogitstune wants with Lydia, Kira brings up the rather salient point that maybe they should check that Stiles is actually Stiles and not the Nogitsune playing another trick on them? The group invites Mama Yukimura and her Oni to McCall Manor to do a little supernatural demon spot-check, which Stiles passes. Or, to be technical, Stiles is “more [human] than Nogitsune,” which isn’t particularly reassuring.

It’s decided that they can’t do anything to find Lydia until the sun goes down, which seems a little off to me. You can’t attack the Nogitsune until the sun goes down. You can still try to find where he took Lydia! And anyway, it’s not like it’s not completely obvious that he took her to the tunnels underneath Eichen House, because that’s where everything happens this season.

In the meantime, Mama Yukimura gives Kira a board game lesson, because that’ll help. And Stiles has a happy reunion with his dad. It’s OK. I’m OK.

There was also a moment when Deputy Adorable FluffyCakes Parrish said he left his last job because he was “drawn” to Beacon Hills. Like “NEMETON SENDING OUT A ‘HEY Y’ALL’ TO SUPERNATURAL CREATURES” DRAWN?! 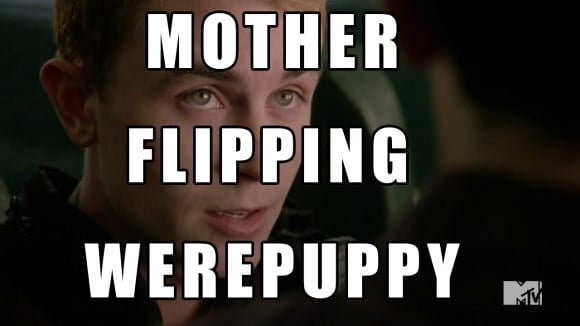 We also get Derek asking Chis why Chris didn’t shoot him in the face, to which Chris replies “We’re total bros now. We bonded! Do you want me to throw away this friendship bracelet I made you?” Or, actually, “we’re not enemies,” but that’s about as mushy-gushy as Chris “Angry Dessert Carrier” gets.

Stiles, back on the case after an arduous case of possession and still looking like death warmed over, gets right back into the groove and suggests that if they figure out why the Nogitsune took Lydia, they might be able to figure out where she is. An offhand comment from Scott puts Stiles in mind of a fellow patient at Eichen House who seemed to know something about the whole Nogitsune situation. Her name’s Meredith. She’s a Gemini. She’s on deathwatch, considering she’s a woman of color on Teen Wolf. She escaped from Eichen House. Oh, and she’s a banshee.

While all this is going on the twins are running through the forest getting shot at by wolfsbane-laced bullets. Like I care. Derek rescues their asses and stows them in the werecoyote den while he goes off to get some help from Chris Argent, who recognizes the shell casings. Again: Like I care. That’s all I’m going to say about the twins about this recap, except maybe to rant later on that they get to be alive while—

–wait. Not there yet.

Allison and Isaac, on Finding Lydia’s Car duty, have a cutesy-pie conversation about whether Isaac was really Isaac when they did the horizontal mambo the other night, or if he was completely under the control of the demon fly. Allison wants to know whether the person she had sex with was actually a supernatural entity seducing her under false pretenses. Awwwwwww—playing potential rape for comedy, like how Isaac’s history of child abuse was the butt of jokes earlier in the season. How cute!

Allison, being a boss and owning everything, discovers a message from Lydia: “Don’t find me.” Yeah, not gonna happen.

Meredith the Eichen House Banshee shows up in Coach Finstock’s class, where she proceeds to get all creepy with “I hear them screaming” and “Everyone’s going to die.” Danny calls Finstock on the way he calls Eichen House an “insane asylum”—YEAH, DANNY—so Finsock calls it a “nuthouse” instead, because LOL sensitivity to people with psychiatric issues. Head Orderly Douchebag shows up to take Meredith back, and if he weren’t flipping evil enough, he proceeds to be mean to Cocah.

I repeat: HEAD ORDERLY DOUCHEBAG WAS MEAN TO COACH.

Sic ’em, fandom. We need this character’s head on a stick.

Later on he tracks down Meredith in the music room but is stopped by Coach, who tasers him because “This school has a strict no bullying policy.” Not sure how literally attacking the orderly and letting Scott, Stiles, and Isaac run away with the escaped patient instead of, IDK, calling the police would fly with the school board. But all the same:

Lydia’s in the tunnels with the Nogitsune, who’s being all creepy about how “your friends aren’t really all that into rescuing you” and “I’m insatiable and I’m going to eat your banshee screams” or whatever. Also: Weird smelling. At times Lydia’s plotline seems like one big sexual harassment metaphor, and I would really like that to stop, now, please.

Meanwhile Allison, needing something to do until she can rescue her BFF, is put through “hunter graduation”—making some silver arrowheads—by her father. She also tells him she loves him and is proud of him, in case something goes down when they go after the Oni. Chris tries to tell her that it’s OK, he knows, but she responds that this isn’t about you, Dad. This is about me. I never said it to Mom, and I need to say it to you, so let me get my emotional moment out, please.

Scott, Stiles, and Isaac spirit Meredith away to Scott’s house, where Agent McCall’s there waiting to tell Scott his big bad secret: The reason he left is that he got drunk and accidentally caused Scott to fall down the stairs. Wait. Is that Mama McCall’s big secret, too? Is that it? Scott, no-BS champion of my heart, points out that it was an accident, and he healed, and he has better things to do right now than enable an absent father’s martyr complex, kthx.

Meredith (who gets a fun moment when she comes on to Isaac—get it, girl) uses some sort of weird BANSHEE  COMMUNICATION NETWORK to discover that Lydia doesn’t want to be found. There’s a fun, antagonistic banter scenelet between Isaac and Stiles, and oh my god I just want 47 minutes of them kvetching at one another. Meredith uses her banshee powers to intercept some weird French message (?????), which helps Scott figure out that the Nogitsune took Lydia to Eichen House.

Chris tries to get Allison not to go, because something about the hunters who shot they-who-must-not-be-named makes him really scared. But she goes anyway, because there’s a best friend needs saving. Also there is Kira, who used the Power of Go to figure out that her mom is planning to go kill the Nogitsune… which of course she is? Whatever. Only problem is that the Nogitstune dying might kill Stiles, too, which Stiles is A-OK with because it’ll mean he won’t be able to hurt anyone else. Scott gives a rousing pep talk about saving Lydia, which is capped off by Isaac saying he’s just there because he doesn’t want to do homework.

Surprise, surprise, the Nogitsune lured the good guys to Eichen House to he could use some magic tomfoolery to take control of Mama Yukimura’s Oni. Evil, magic deus ex machinas poppin’ up all over the place. While Kira, Allison, and Isaac fight the Oni, Scott and Stiles go rescue Lydia, who is freaking out because she knows someone’s going to die. That’s why she wanted them to stay away

Specifically, Allison’s going to die. She kills the Oni attacking Isaac with her silver arrowhead before one of the Oni stabs her. 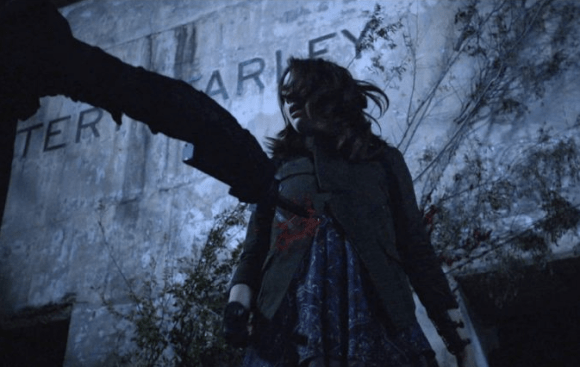 I’m still slightly in shock here. This is a show that has a history of killing its ladies and people of color while keeping its male characters—even the defeated villains—off in the wings somewhere. And now Allison, one of the main female characters, dies? While the fricking twins get to live? While PETER gets to live? We know that it was Crystal Reed‘s call to leave the show, which at least means Jeff Davis didn’t decide “Hey, you know that Allison? Let’s get rid of her.” But I’m still pissed. Allison had like nothing to do in 3A! Everything was all twins and Deucalion and Allison occasionally getting a good scene. No wonder Reed wanted to leave. And Davis cooked up some stupid “His parents moved him to London!” loophole so Jackson could still come back if the actor ever changed his mind. But no, Allison dies.

Aside from all that, I’m just really sad that Allison died because Allison was the motherfricking best. Basically, this is me right now.

Lydia is rescued. The Nogitsune and his pet Oni peace out. Allison’s dead and Scott is sad and Lydia’s sad and Chris Argent is sad and I’m sad.

We’re going to start watching season four of Teen Wolf. (Or not. Your mileage may vary.) The twins will be there, and Allison won’t be.