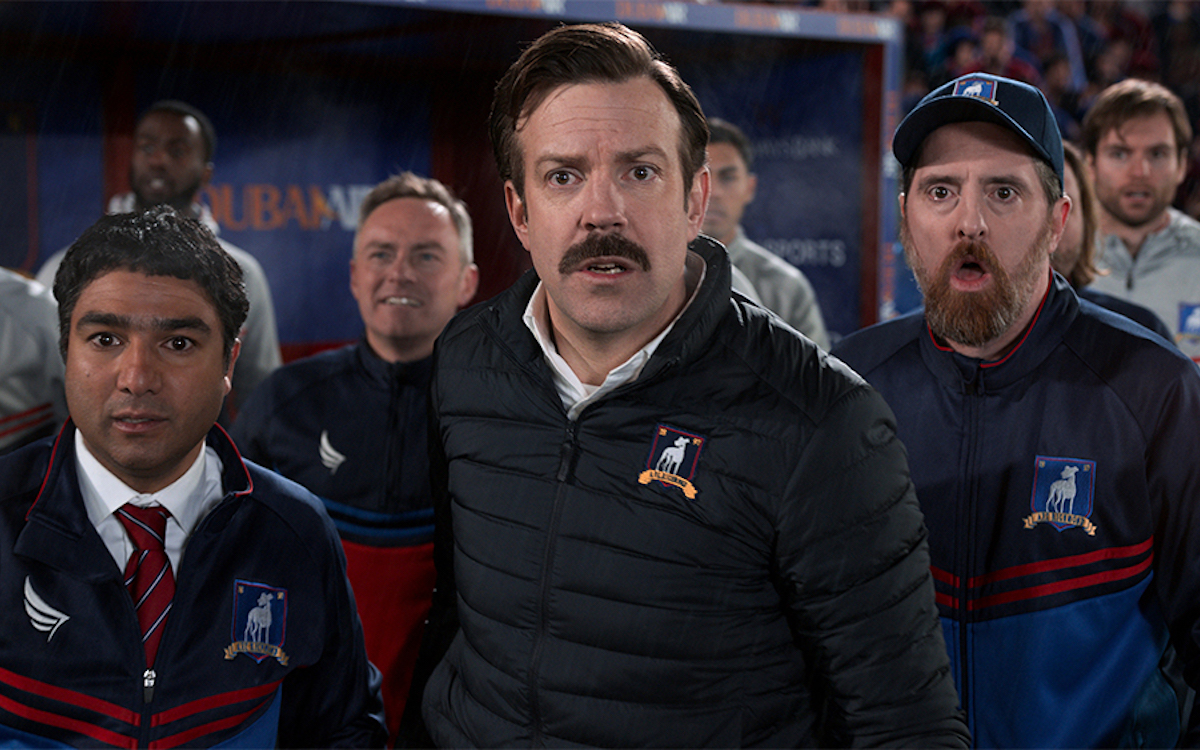 Ted Lasso is a show that feels so intimate, it can be easy to think that the production side of things is as unassuming as the main character, but that is very much not the case.

Executive producer Bill Lawrnece (Scrubs, Cougar Town) and members of the editorial team did a panel discussion at SXSW Tuesday about how the show’s editing helps tell the story, land the jokes, and stick the emotional landing.

The most surprising reveal was the explanation of just massive the visual effects work is on the series.

Ted Lasso is the story of an American football coach who gets recruited to coach a Premier League English football (aka soccer) team, despite knowing literally nothing about the sport. When he and Assistant Coach Beard (Brendan Hunt) first show up at the fictional Nelson Road Stadium, they are very quickly yelled at and whisked off the field by kit man Nate (Nick Mohammed).

Nate’s freak-out wasn’t an overreaction. The English take their grass fields very seriously, to the point where the series used Selhurst Park, an actual Premier League field in London, as their filming location, but they were not allowed to step, let alone play, on the field.

That means that every scene featuring AFC Richmond practicing or competing was done outside of Selhurst, on a CGI field.

“Crystal Palace [the team that plays at Selhurst Park] was awesome, and they’re like, ‘Yes, you can shoot here!’ And that’s what we were planning to do,” Lawrence says. “And then we got there and this is a Premier League soccer team and their stadium is pristine.”

“We did shoot Jason and Brendan arriving there,” he says, “but then they’re like ‘Oh, you can’t ever put an actor on that field, nor can you ever, ever put cameras on that field that would touch the grass.”

So they filmed at the stadium but absolutely none of the actual game play was shot there. If you’re not a VFX expert, though, you probably never noticed.

“Look, as long as nobody realized–if they thought we were at Selhurst, then we did alright,” says supervising producer Kip Kroeger. “That was the idea. If you guessed we had about ten visual effects shots per episode, then we’re doing alright.”

In reality, there are so many more than ten. The team built the CGI stadium and made “little cartoons” of the actual games that they made before filming in London–sort of an extremely intense, in-depth moving storyboard. As editor A.J. Catoline says, that process “was like a chance for us as editors to be involved in the directing process.” It also allows all of the actors to look like legitimate Premier League athletes.

Earlier this year, Barnstorm Visual Effects released a video showing just how incredible the VFX work on the show is, turning that CGI field into a totally convincing home for Richmond (via Digg):

(image: Apple TV+)
Want more stories like this? Become a subscriber and support the site!