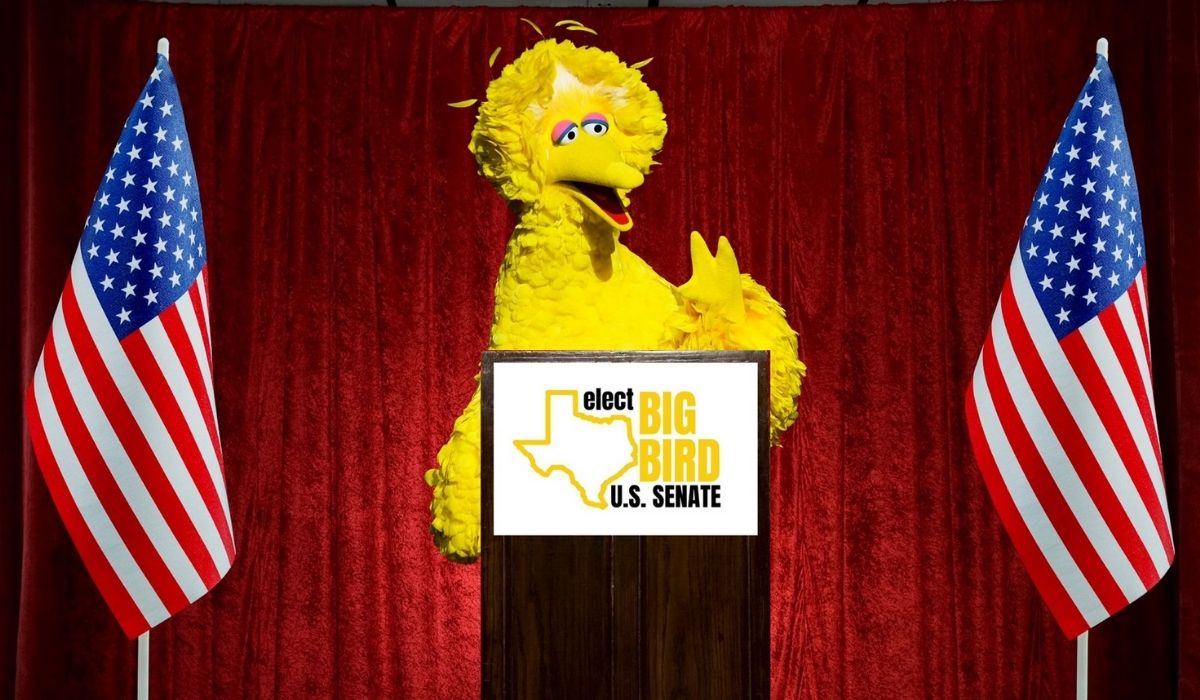 When Sesame Street star Big Bird tweeted he got his vaccine on November 6, several high-profile conservatives (many of which are probably vaccinated) with nothing better to do cried fowl. Senator Ted Cruz from Texas called the tweet “government propaganda…for your 5 year old,” showing his entire ass once again.

Not only is Sesame Street owned/run by Time Warner Networks (HBO and HBO Max), but it’s been owned by those networks since 2016. Maybe he forgot considering that was a rough year for him in which Trump made fun of Cruz’ wife appearance on Twitter, but when Trump became the GOP nominee, Cruz phone-banked for Trump. With im-peck-able timing, people pointed out that Sesame Street actually has a long history of promoting data-driven public health practices—including vaccines!

Then came the memes…

#CancunCruz
I do believe this about sums up #CancunCruz pic.twitter.com/tcRVKnC9CD

Thank you to all 28k of you for joining team Big Bird. As we move forward, we will be launching a campaign across Texas’ 254 counties to defeat flyin Ted Cruz. Unlike Ted, I can’t fly. pic.twitter.com/8LSUOsRf2z

While there is no official campaign website, Big Bird for Senate has voiced support for various bipartisan and progressive policies, most topically infrastructure support. Some of this is related to the Build Back Better plan (which the campaign calls the Bird Back Better) and another support is for state law updates to fix energy grid failures.

This morning, Team Big Bird held a press conference in front of the Texas State Capitol calling on lawmakers to pass upgrades to the energy grid. Team Big Bird stands with the people. pic.twitter.com/dU3pf0NeBs

Over direct message, I reached out to Big Bird for Senate and learned about some of the biggest endorsements received by the campaign so far.

Out of the endorsements we’ve received thus far, the two most meaningful has come from Voters of Tomorrow, a youth-led group that recognizes that Big Bird will be a Senator for our future generations. Also, today we received an endorsement from our first elected official, Connecticut Senate Majority Leader Bob Duff, and as this is our first, this is definitely one of the most meaningful.

We recognize that our election is four years away, however, Texas has several local and state-wide elections coming up that are so important. We are going to ride this momentum to 2022, help defeat Greg Abbott and others, and build the necessary infrastructure for 2024 and beyond.

And with that, they are absolutely right. Recently there was an election for several local, state, and national (House) positions in Texas as well as 10 propositions all Texas were to vote on. Only 9% of eligible voters turned out for this election. Going the day of and an hour before the polls, closed I brought snacks (no need to make another mistake), but there were more people running the polls than there to vote. This is despite four props relating to criminal justice reforms and two related to COVID-19.

Currently, Big Bird for Senate is only following the official Big Bird and a few more parody accounts that comprise his campaign staff. Each pick suits their strengths and personalities, meaning sassy Elmo is not the comms director. This includes Ernie (Political Director), Bert (Communications Director), Elmo (Senior Advisor to Big Bird), Cookie Monster (Campaign Manager), and, of course, The Count (Finance Director).

Last night, @TheBeatWithAri requested that we hire the Count and Ernie to join the team.

This morning we delivered. Please join us in welcoming @findirectcount and @politicalernie to the team! pic.twitter.com/oojjjtN0Sy

Not only do they work for the campaign, but they are still dedicated to their mission of love, understanding … and education.

This is why I hired you, Count. https://t.co/X3nmtVhKnW

While the campaign isn’t producing official merch (yet?), they did confirm several third parties are. Big Bird for Senate said, “If we start doing our own in the future, any and all proceeds will be going to help elect Texas Democrats up and down the ballot.”

In addition to reaching out to the parody campaign via Twitter, I also talked with the person running the account (who wishes to remain anonymous). While they are not Texan, they like us are disturbed by the behavior of Cruz and other Texas Republicans in and how they “continue to put their political careers ahead of their constituents.”

Initially, this was just something fun and light hearted I thought of doing, but now it’s really catching on with thousands of people because Americans want decency and common sense to win in Washington.

They went on to say how their worldview was shaped by the iconic then-PBS show.

Growing up, my parents often showed me re-runs of Sesame Street from before I was born. Some of my favorite moments watching Sesame Street were Kermit’s “It’s not easy being green” as well as many of the publics PSAs the show did including its first vaccine PSA with Big Bird. In a lot of ways, Sesame Street got me interested in the news and politics.

Though this started from an embarrassing elected official spewing anti-vaccine messaging on repeat, it has grown into something fun and motivating, and Big Bird for Senate is approaching 100k followers. Also, while not a campaign issue, each member of the Big Bird for Senate parody account campaign frequently reminds their tens of thousands of followers to get them and eligible kids emu-nized.