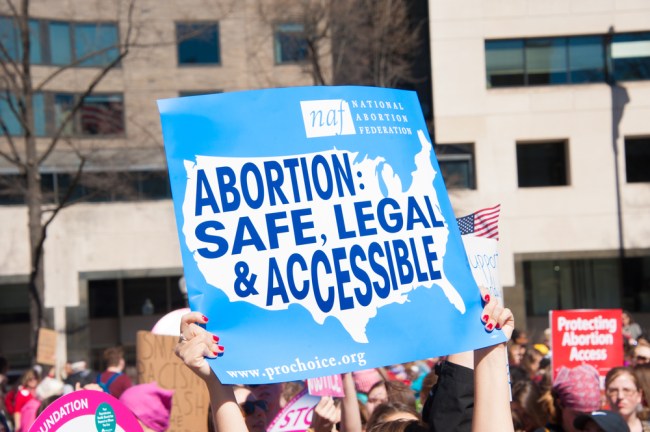 A reproductive justice advocate with a background in tech, Jenn Rudiger wants all feminists and progressive advocates to know one thing: “No matter what your background, your skill set — there’s always a way to get involved and fight the good fight.”

Rudiger is a volunteer at the D.C. Abortion Fund where she helps oversee the the fund’s new case management and intake system, which helps its case managers securely manage and connect with patients seeking abortion services. Rudiger says that it was the creation of this secure and user-friendly, internet-based case management system that showed her that everyone has something to bring to the table when it comes to the reproductive justice movement.

“Like all abortion funds, when DCAF first started, it was pretty small,” Rudiger recalls. “We could keep track of patients and their needs in notebooks. But over the years we’ve grown — a lot. We’re serving so many more patients, now, from Maryland and Virginia, so our staff and volunteers have grown, and we started having to use computers, different case management systems, and eventually we realized none were serving our needs, so maybe we should make our own.”

The goal in building and launching DARIA was to establish a secure system to keep clients and staff safer from anti-abortion hackers and extremists, a system accessible on the internet without requiring additional software installments.

Somer Loen, a San Francisco-based reproductive justice advocate and web producer who has recently helped put together two hackathons for reproductive justice in Northern California, says cybersecurity attacks by anti-abortion extremists are a serious threat. “Last year, my sister and I were organizing for the National Network of Abortion Fund’s annual Bowl-a-Thon fundraiser, and the website got hacked with disturbing images put up by extremists,” she recalls. “Tech is definitely being used by anti-choice extremists to attack abortion rights.”

But, according to Rudiger, more safety wasn’t the fund’s only goal. They also sought to create a more efficient system to lighten the load on case managers’ shoulders, and give them more time to communicate with and serve clients seeking care. The ideal system would offer both case managers and patients a better experience.

In 2015, with these goals in mind, the DCAF first got involved with Code for D.C., a nonprofit that helps with coding projects like this at no cost. At first, Rudiger says they didn’t know what to expect in terms of how Code for D.C. would respond to their work on behalf of abortion rights, and as a result, DCAF went into the situation with discretion

“The climate around abortion rights in D.C. — I mean, for the most part, it’s a progressive area, you know, with the exception of many of the people on Capitol Hill,” Rudiger says. “But we had our guard up.”

But when they finally discussed their work and what the project would be used for, Rudiger says the organization “was thrilled.”

“They were so supportive, so happy to be helping our cause,” she added.

According to Colin Fleming, a volunteer with DCAF as well as for Code for D.C., this is just how Code for D.C. is as an organization. “It’s all about openness, civic engineering, helping important causes with technology,” he says. “We want safety, better experiences for our clients who are going through so much, for our case managers who are working so hard to get these people access to abortion. What they’re doing is so important, and if tech can help in any way — and it absolutely can — then that’s what we’re going to do, help.”

DCAF launched a prototype for DARIA in the summer of 2016. The fund is currently working on sharing the system with other abortion funds who need it, particularly as their caseloads continue to grow and as the emboldenment of anti-abortion extremists continues to endanger those working in reproductive justice.

Earlier this month, the Baltimore Abortion Fund adopted DARIA, and although Rudiger says parts of DARIA, such as an accounting component to help case managers with calculations, are still being developed, she hopes it will continue to help DCAF and other funds across the nation in the years to come.

The launching of DARIA isn’t the only way the D.C. Abortion Fund has explored use of tech to promote reproductive justice and fight barriers to abortion access. In March, some in the fund journeyed to San Francisco to participate in a hackathon for abortion access.

“We did about 10 months of work in two nights, I think,” Fleming, who attended the event, recalls.

The Abortion Access Hackathon — which included participants from DCAF, Women’s Health Specialists, ACCESS: Women’s Health Justice, Planned Parenthood Northern California, staff members from the National Network of Abortion Funds, and  local engineers — yielded all kinds of cool projects, including some apps that may be launched later this year. Some of these projects will help increase safety around abortion clinics and volunteer services, and also help people seeking abortions around the country to navigate laws restricting abortion access.

“The creativity and genius were absolutely stunning,” Loen, who helped put the Abortion Access Hackathon together, says. “Most hackathons you go to, they’ll be competing for money or recognition, or something like that. But everyone who showed up, we were all working for the same cause, and that’s helping spread reproductive justice. So the environment that weekend was just one-of-a-kind, it was inspiring.”

Loen, who joined BACORR ( Bay Area Coalition for Our Reproductive Rights) in 2008 and who is also involved with the National Organization for Women, hopes to formally establish an organization to host and organize reproductive justice hackathons year-round across the country. She looks forward to another one planned for September 15-17 in New York.

Loen hopes her work with the hackathons will show reproductive justice supporters who work in tech that there’s always a way to support a progressive agenda, even if your day-job isn’t traditionally dedicated to this. Lindsay Rodriguez, NNAF Communications Manager, attended the hackathon as well and commented “it was incredibly fruitful to be able to work with hackathon participants to ensure the unique challenges of abortion funds were centered in this exciting event. When the tech community listens closely and draws from the expertise of people working every day in this movement, we can together engineer solutions that truly have the ability to expand abortion access in our communities.”

Additionally, Fleming hopes that even those working in tech who don’t quite view themselves as activists will also get involved. “Engineers, some of them don’t know too much about advocacy, and I think it’s always nice to grab them by the collar, make them take a look at this, learn, and get behind it,” he says, looking forward.

At the end of the day, you might not typically associate engineering and tech with reproductive justice, but Jenn Rudiger at the D.C. Abortion Fund says that’s the most inspiring part of it all. “Everyone can help and participate — not just the lawyer and doctor and activist-types,” she says. “And they’ll be all the more empowered for it.”