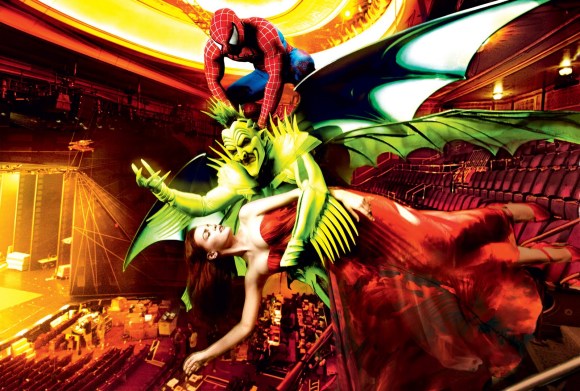 This weekend will mark the end of Julie Taymor‘s production of Spider-Man: Turn Off the Dark. Not the whole show, just her version of the show which is now being reworked since her firing last month. Much like the plague survivor in Monty Python and the Holy Grail, this show is not dead yet. It will return May 12 after a complete creative overhaul with a new production team. But I’ll bet you were wondering what kind of hot mess you’ve been missing!

For one thing: The “Geek” Chorus. (Instead of a “Greek” Chorus. See what they did there?) A quartet of singers who stood in for Bono, The Edge, Taymor, and playwright Glen Berger will no longer be providing musical narration.

But a major change will be the exclusion of Arachne, a villain based on characters in Greek mythology who sang a song called “Deeply Furious” that involved her getting into such a rage that she … put some shoes on? Really?

“Arachne and her spider ladies-in-waiting became all-powerful by slipping shoes onto their many legs.”

Wow. Really. Also gone is the death of the Green Goblin, who will take the place as the main villain after Arachne is “reduced to a guardian angel character.” This move was actually a direct result of a focus group on the show, but considering how well that villain did in the first movie, maybe giving people a different interpretation of something they already know had a tiny bit to do with it. (Just an idea.)

A major part of what is changing is the tone of the show, which was, apparently, too adult for the family crowd.

Members of the current production, some of whom spoke on condition of anonymity because they had signed nondisclosure agreements at the producers’ request, said that the goal of the new creative team was to strip away some of the darker elements of the musical to make it more family-friendly.

But people close to the show, namely its performers (both those who will remain in the show and those whose characters have been cut), are defending Taymor’s vision for the show and think she’s getting a bad rap. Says Gideon Glick, who was part of the now defunct Geek Chorus:

“I have always been excited by Julie’s visceral style … Sometimes style can alienate audiences from the material. But Julie is a rare artist whose distinct images are imbued with emotion, evoking awe and tears.”

Was this show doomed to fail from the start because of its overblown budget? Surely the on-set injuries were the more worrisome problem, but is there a chance that no one ever wanted this to succeed? It has certainly been a crazy ride since it was announced. But maybe it just goes to show that there is such a thing as too much and trying too hard. In the meantime, we still highly recommend The Spidey Project, which is still on YouTube.