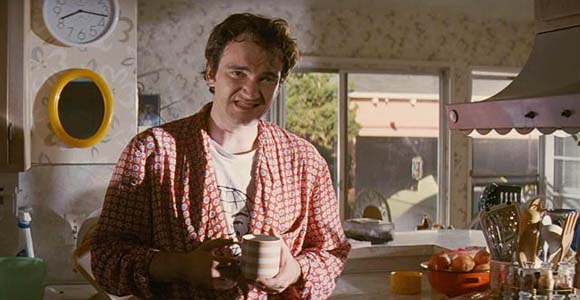 Director Quentin Tarantino is reportedly so upset over his latest script being leaked, he’s just decided not to make the movie at all. Well ok then.

Tarantino had finally started work on the Western he’s long teased, The Hateful Eight. But according to Deadline, loose lips sink ships. They write:

His script The Hateful Eight leaked after he gave it to a small circle of actors, Quentin Tarantino tells me that he’s so upset that he has decided that he will not direct that film next. So basically that means the conversation that will be circulating around town following this story with Tarantino goes from an ensemble Western to a whodunit. As in, which actor or their reps leaked the script that, as a result, is going on the shelf — literally a bookstore shelf, because Tarantino tells me he will publish it first and maybe revisit the prospect of a movie in the next five years.

Not ever having something similar happen to me I can’t know how I’d react but this seems like a strange move. Why forget the film you’ve already worked so hard on and were obviously excited about? Why not just find out where the leak came from and never work with that person again? The only other instance of this happening which springs to mind is when Twilight author Stephenie Meyer decided to forgo publishing her novel Midnight Sun, a telling of Twilight but from Edward’s perspective, after a partial draft leaked online.

“I did not want my readers to experience Midnight Sun before it was completed, edited and published,” she wrote on her official site years ago. “This has been a very upsetting experience for me, but I hope it will at least leave my fans with a better understanding of copyright and the importance of artistic control. So where does this leave Midnight Sun? My first feeling was that there was no way to continue. Writing isn’t like math; in math, two plus two always equals four no matter what your mood is like. With writing, the way you feel changes everything. If I tried to write Midnight Sun now, in my current frame of mind, James would probably win and all the Cullens would die, which wouldn’t dovetail too well with the original story. In any case, I feel too sad about what has happened to continue working on Midnight Sun, and so it is on hold indefinitely.”

As far as Tarantino’s feelings on his leak, he said it’s left him “very, very depressed.”

“I gave it to one of the producers on Django Unchained, Reggie Hudlin, and he let an agent come to his house and read it,” Tarantino said. “That’s a betrayal, but not crippling because the agent didn’t end up with the script. There is an ugly maliciousness to the rest of it. I gave it to three actors: Michael Madsen, Bruce Dern, Tim Roth. The one I know didn’t do this is Tim Roth. One of the others let their agent read it, and that agent has now passed it on to everyone in Hollywood. I don’t know how these fucking agents work, but I’m not making this next. I’m going to publish it, and that’s it for now. I give it out to six people, and if I can’t trust them to that degree, then I have no desire to make it. I’ll publish it. I’m done. I’ll move on to the next thing. I’ve got 10 more where that came from.”

After all this, Tarantino admitted he could always change his mind. “I own the fucking thing. But I can tell you, it’s not going to be the next thing I do. It’s my baby, and if the muse calls me later to do it, we’ll do it. I was thinking about the idea of maybe publishing it before I made it, but now that deal happens for sure, and I’m not doing it next.”