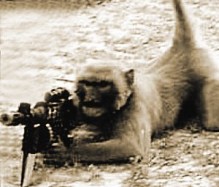 Well now: Here is an insane rumor which — spoiler alert — is not at all true. People’s Daily Online, the website of the official newspaper of the Communist Party of China, claims that the Taliban is training “monkey terrorists” to “use the Kalashnikov, Bren light machine gun and trench mortars … [to] identify and attack soldiers wearing U.S. military uniforms.”

Here’s the fiendish part of the Taliban’s scheme which is not real: Not only would armed and dangerous monkeys be fighting on the wrong side of the War Against Terror, but animal lovers would pressure the U.S. government to withdraw troops from the country, because the prospect of injuring Kalashnikov-toting monkeys is far more upsetting to them than any other concern one could possibly raise about the war in Afghanistan. According to People’s Daily, which is not the Chinese edition of Weekly World News, “A senior U.S. military source confirmed the existence of the Taliban monkey soldiers, military experts call armed monkeys ‘monkey terrorists.'”

But there’s only one hitch to this untrue rumor which cites as its primary evidence unnamed sources and “media outlets” and the above badly Photoshopped picture of a terrorist monkey: It isn’t true.

Military rumor investigator Jeff Schogol got in touch with a named NATO spokesman, who said that “We have absolutely nothing that leads us to believe that this tale could be even remotely based in reality.” A primatologist pointed out to him that the picture appears to depict an African baboon and not one of the rhesus monkeys which actually live in central Asia, that you probably couldn’t train a monkey to steadily hold a weapon, and that the sound of the gunfire would “certainly scare most animals and make them stop.” Oh, also: It turns out the gun in the photo is a toy: (Schogol’s got the backstory.) 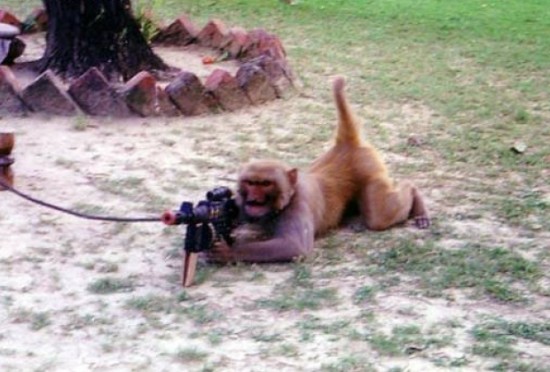 It was fun while it lasted, Internet.