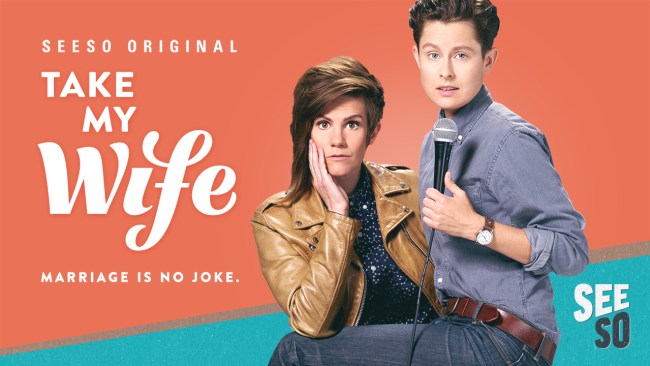 A couple of spoilers ahead! Not many though, and nothing major that would deter you from watching/enjoying this wonderful show.

Seeso’s Take My Wife is my new favorite TV show. Because I’m a grad student, and it’s summer, and I can’t stop binge-watching everything, this is saying a lot. But Take My Wife is the reigning queen of television for me right now—I just inhaled all of season 1, and I CANNOT WAIT for Season 2, which just finished shooting.

Take My Wife stars IRL comedians Rhea Butcher and Cameron Esposito, who are also IRL wives. They do all sorts of awesome creative work, including a web series called She Said, for Amy Poehler’s Smart Girls. They have a perfect dog named Murph (#murphthederph). They also host their own show, Put Your Hands Together, in Los Angeles, at the Upright Citizens Brigade Theatre, which is the premise of the show: a couple of comics (literally) start hosting a show together in Los Angeles, blending their personal and professional lives. Hijinks ensue. Queer, feminist, insightful, thoughtful, hilarious hijinks. What more could my soul want?

With the premise of: a couple, who are both comedians! I expected Take My Wife to feature some competition between the leads. Maybe it’s me projecting Sex and the City Berger and Carrie or Merrily We Roll Along vibes. But what I found so incredibly refreshing about this show is that it explores two creatives, working in the same field, who really have each other’s best interests and success at heart. And guess what? There’s still a lot to explore when people in close relationships have similar career aspirations and have healthy relationships based on kindness and empathy. !!!

So the first season of Take My Wife starts with two big game changers for this couple: Esposito encourages Butcher to quit her day job, and the two come out as a couple to their comic world at the end of the episode. The latter becomes routine fairly quickly, and the former is a plot point that becomes an arc for the whole first season: will Rhea find happiness pursuing her comedy career full-time? And how does Cameron best and most respectfully support her partner, while moving forward with her own career? Overall, I’d definitely describe this show as feel-good, even as it tackles tougher issues. Feel-good as in, “Wow, I actually feel good about enjoying this!”

Butcher and Esposito and their writers incorporate important issues into the episode storylines seemingly effortlessly – almost as if these issues come up every day, and actually affect people! And you can write about them! One of my favorite moments in the show, which I won’t spoil entirely, happens when a friend comic performing in one of their shows tells some rape jokes as part of his set. Hosts Butcher and Esposito get up on stage at the end of the night and address the issue in their banter, educating the comic and the audience with honesty, and humor at the expense of those who don’t take sexual assault seriously. Their response is nuanced, but feels very normal too. It leads to a moment at the end of the episode that left me choked up and grateful. I can’t even begin to express how validated I felt watching it.

If you’ve read this far, it’s probably unsurprising to you that Take My Wife explores and subverts gender too—they casually and not-so-casually talk about stereotypes of masculine/feminine, on stage and at home, all while making us like them and laugh. In one episode, where Butcher and Esposito are wondering if they should become parents, they lock their friend’s baby inside their apartment, and end up eating sushi with their friend Dave (Zeke Nicholson) and becoming best friends with their delivery man, who ends up staying for pizza and tacos. That’s the plot, but the writers make this story a vehicle for thinking and talking about parenting and gender and sexuality. It’s hilarious and awesome. Butcher and Esposito also do a great job modeling a non-toxic monogamous relationship: Janet Jarvey (please go watch her on Burning Love) also guests as a movie star who takes an interest in Esposito, and both leads have a crush on her and express this to each other. It’s not a big deal, it’s just a thing, and neither one is upset by it.

The first season ends on a little bit of a cliffhanger, so I’m super pumped for season 2. I want more comedy, more perfect electronic transition music, more perfect button downs and jackets and suits, more sexism and rape culture explored, and definitely more of their weird and wonderful neighbor, Frances (Laura Kightlinger). Butcher and Esposito both have been previewing the season on their respective Instagram accounts, showing off all of their awesome guests for season 2, POSSIBLY INCLUDING TEGAN AND SARA:

Seriously, do yourself a favor and get on Seeso and binge-watch season 1 of Take My Wife. And then tweet about it to me, because I just want to talk about how much I love it.

Molly Booth is a freelance writer and YA author of Saving Hamlet, out now, and Nothing Happened, spring 2018, both from Disney Hyperion. She’s also an English MA candidate at University of Massachusetts Boston, where she studies Renaissance Literature and English Pedagogy. She was homeschooled through high school, which means she gained her Geek/Nerd/Dork Certificate at an early age. She lives in Boston with Harriet the queen cat, and her loaf-of-bread shaped dog, Suzie. Visit Molly on twitter, tumblr, instagram, or on her website!