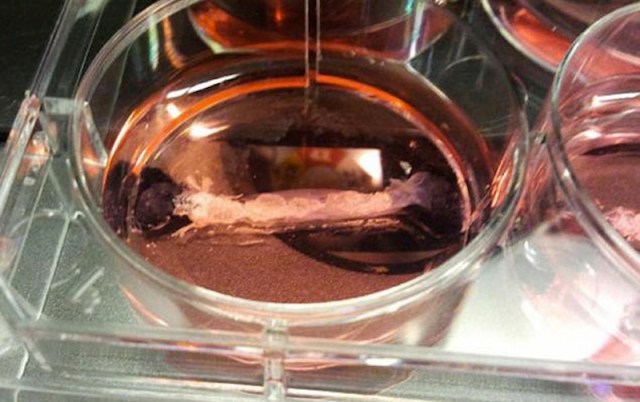 Have you ever wanted to just eat a burger without that sinking feeling that somewhere, a cow’s family has declared you their mortal enemy? You could get your chance in just a few weeks when a beef hamburger created from entirely lab-grown cells hits the grill in London. If you’re intent on sampling the petri dish patty, though, you’ll want to bring your checkbook, as this proof of principle for lab-grown meat cost an estimated $325,000 to make.

The fake answer to real meat is the brainchild of Dr. Mark Post of Maastricht University in the Netherlands, who has made a notable side project in the last few years of trying to coax cow stem cells into an edible patty. (For some reason, the good doctor’s main line of research in growing and building blood vessels doesn’t get the same coverage — go figure.)

Post’s research, which has been funded so far by the largesse of an anonymous donor, has resulted in a burger composed of more than 20,000 strips of protein and muscle tissue cultivated from stem cells and then compressed together. While the burger will reportedly make its debut in the public eye a few weeks from now, Post has tested the meat himself and reports that it tastes “reasonably good,” needing only a little salt and pepper.

Post and his team know that their test tube treat isn’t going to singlehandedly bring cultured synthetic meat into the mainstream, but they do hope that success in their project will encourage more teams to work on making meat that’s never been an animal a reality in labs across the world — and one day, on supermarket shelves. Cheaper versions of the substance could one day mean less demand for cattle, which consume a lot of space and resources that could be put to much more efficient –though markedly less delicious — agricultural use.

As for me, I usually take my red meat a little raw — okay, I like it still mooing — but this one? This one I think you can cook all the way through. I’m not scared of it, mind. But there are some things you shouldn’t even consider putting in your mouth until you’re very certain you have killed them with fire, and “beef grown in a test tube” sure seems like one of them to this reporter.