A Tale of Two Magicians: How SyFy’s TV Adaptation Left Alice Quinn Behind 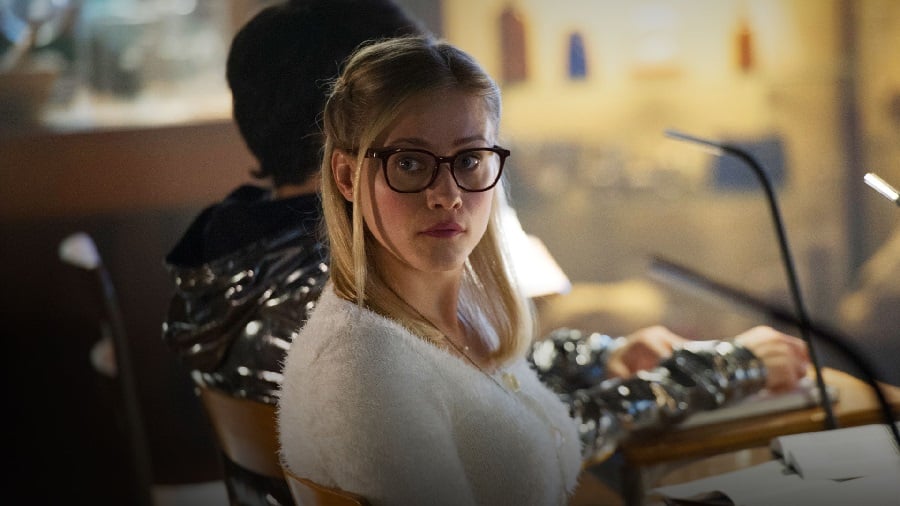 All right, so I’m a little obsessed with The Magicians. One of my siblings told me to watch the SyFy show, and I did, finishing season 1 in maybe 3 days. (Now the wait for season 2 begins.) I liked and sympathized with the main character, Quentin Coldwater (Jason Ralph), but found myself falling head over heels for one of the female leads, Alice Quinn (played by Olivia Taylor Dudley). When I read the first installment of the series, I dug book Alice even more—and realized that TV show Alice didn’t get the ending she deserved. And it’s hard to pinpoint why.

Both the show and the book introduce Alice Quinn as a quiet, talented student in the same class as Quentin at the school for magicians, Brakebills. She quickly evolves into a central character, for obvious reasons: Alice is smarter than everyone, and by far the most talented of the magicians. She’s also kind, impulsive, and ambitious as all hell. Her family life is complicated—her parents are out of control, and her brother died doing magic and became a niffin (a being made of pure magical energy, no longer the person they were before). Despite her natural abilities, Alice had to fight her way into Brakebills. Once she gets there, doesn’t sit back and rely on her talents; she works harder than anyone else, and becomes a formidable magician. She also stands up for herself and dumps her boyfriend when he cheats on her. Yes, yes, yes. I love her.

When I first finished the TV show, I checked out The Magicians subreddit, and found a complaint that the finale didn’t do Alice justice. Weird! I thought. Alice was my favorite character in the show, and I thought she’d had a pretty great arc in season 1. In the final episode, Quentin realizes that he’s not the chosen one, it’s her! Though he and the others have failed, Alice can wield the blade that could actually kill the Beast. When they do actually confront the Beast though, everything goes wrong immediately—the Beast begins to choke Quentin, and Alice goes to stab the monster, but realizes her sword has disappeared. The Beast casts some type of horrible spell on her, blood starts gushing out of her nose, and she collapses, presumably dead. So… not a great ending for her. But in terms of women’s character arcs in TV fantasy, I’d seen way, way worse than Alice’s, and I was only mildly upset about it. (Ugh, which kind of shows how I have learned to keep my standards low.) But that was before I read the book.

The novel The Magicians, the first in the trilogy, is, of course, different from the show’s first season in a lot of ways. But Alice’s trajectory is actually very similar—she begins as a fellow student in Quentin’s class, ends as a central character, and undoubtedly is the hero of the story. But while the TV show promises us that Alice is the chosen one but doesn’t deliver (yet), the book follows through.

In the book, the final battle starts out similar to the show. Our heroes are trapped with the Beast, and people get badly injured. Then the Beast actually bites into Quentin’s collar bone with huge jaws, rendering him probably mortally wounded and immediately out of action. But here’s where it gets a lot better: Alice grabs Janet’s gun and shoots the Beast. Four times. When she’s out of bullets, the Beast turns to face her, and what follows is maybe one of the most epic showdowns I’ve ever read in a fantasy novel.

We watch through injured Quentin’s eyes as Alice spars with the Beast. She uses battle magic to speed her movement. She slams him to the ground, suffocates him with sand, and throws fireballs at him. She becomes more confident with every passing moment, taunting her opponent, and Quentin watches, waning and absolutely stunned:

He was a magician, but she was something else, a true adept. He had no idea she was so far beyond him.

The other magicians pitch in, offering back-up with lightning and hails of rocks. But it’s only Alice who can truly fight this monster, as she transforms into a white lioness, and then a white dragon who screams blue fire. Umm, YES.

But her opponent is extremely powerful, and the Beast lands a punch on Dragon!Alice so hard she changes back into her human self. Injured Quentin buys her a little time by releasing a special, graduation demon out of his back (IDK, you gotta read the books), and when the Beast is finished eating the demon, Alice is ready for her final confrontation.

“So,” she said. “So you think you’re the biggest monster in the room?”

To end the battle, Alice deliberately performs a spell so huge that she dies and transmutes into a niffin like her brother. She’s not really herself anymore, but the electric ghost Alice still has her mission. Niffin!Alice descends upon the Beast, he tries to bolt, but she grabs his hair and rips his head off. And that is the end of the human Alice Quinn.

Dumbfounded, I put down my book. How, how, did we get from this ending, to the season 1 finale of the SyFy show?

By comparison, in TV Fillory, Julia (played by Stella Maeve) steps in with the blade Alice was supposed to wield. She makes a deal with the Beast, motivated by her quest for vengeance against the fox God who raped her and killed her friends. The Beast agrees, and the two disappear.

Julia’s storyline is originally told in book 2, so I understand that since Syfy moved her up to season 1 of the show, they had to incorporate her into the end. But watching it again, I saw more clearly how much of that finale was devoted to Julia’s rape and the violence she was subjected to. I realized I had finished that episode feeling shaken—not only did we see the flashback of Julia being assaulted, but Alice was taken out (possibly permanently) and the Beast, a monstrous man, was still at large. I think it would’ve felt very different to come away from a finale that had included Alice’s epic slaying of the Beast. Maybe slaying him with Julia’s help?

Don’t get me wrong—moving up Julia’s plot to season 1 made for an intertwining story that felt like a positive change. It created a clearer contrast: instead of staying in the Quentin bubble, we got to follow Julia and her brave, terrifying struggle to find her way into the privilege world Quentin was living in. I think that was a great narrative choice. But I’m getting the sinking feeling that her story arc came at the expense of Alice’s. Why couldn’t we have both?

There’s speculation that SyFy isn’t ready to kill off Alice. She wasn’t burned into energy in front of our eyes, so it’s possible, though she looks dead, that she survives that horrible bleeding-out spell. Olivia Taylor Dudley is brilliant, and Alice not dying and being around as her human self would be awesome. But who says Alice’s battle had to end in her becoming a niffin? Can’t she go all out, risking her life, kill the Beast, but live to kick ass another day?

I just want to see her kicking ass. I want it so much.

Grossman created a kind, fascinating character, and her book 1 story ended showing us exactly who she is: beyond powerful, beyond kind. The TV show set Alice up to be that same person, but didn’t let her shine the way she was supposed to. SyFy threw all of it out the window, and in doing so, they took away the culmination of what makes Alice Alice. I hope they find a way to give her what she deserves.