Awesome Wooden Boombox Proves That Boomboxes Can Still Be Cool 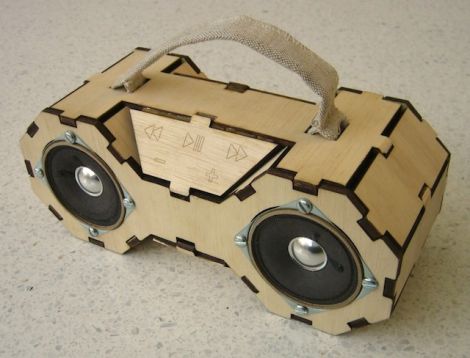 It’s almost 2012. In this day and age, if you hear someone say “boombox,” it’s reasonable to assume they’re either time travelers from the ’90s or they mispronounced Boom Blox, which they were talking about for some reason. Boomboxes can still be cool though, as evidenced by this DIY wooden one put together by Matt Keeter. They don’t have to be expensive either; Keeter managed to piece this one together for a total cost of less than $100.

He originally modeled the thing with cardboard, but then went through and cut the peices out of wood with a laser cutter. The design allows for all the different panels to just be snapped together, but he glued some of them, just in case. You don’t want to accidentally ruin a bad boy like this. The control scheme is all capacitive buttons for that extra future-y feel.

If you want a boombox, have $100, some free time, and access to a laser cutter, you too can build one of these guys. Keeter’s posted the designs and instructions. I know I want one. Now I just need to find a pesky laser cutter.

(Fab Boombox via Hack a Day)