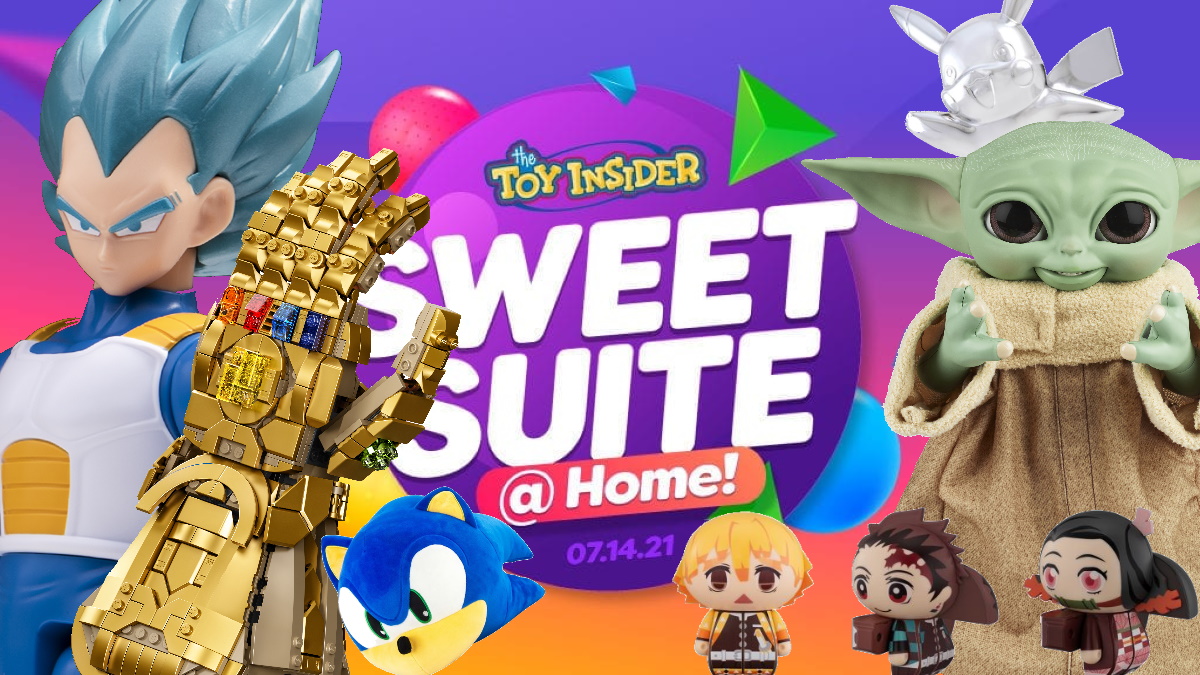 On Wednesday, The Toy Insider had their Sweet Suite event, a time where toy companies come together and show off what they have on the horizon. Due to the pandemic, the event was hosted virtually, which allowed guests to explore each booth, watch live toy demonstrations, and chat with company representatives via many, many Zoom calls.

I made the mistake of checking the event out, and by mistake I mean welp, there goes part of my paycheck. There were all sorts of toys for all ages, my primary interest being the toys that spoke to my nerd girl heart. I was happy to see the range of pop culture toys, from anniversary editions to things that’ll make you struggle to decide whether or not you should keep the thing in its box.

Before I dive in to talk about my favorite products, I highly recommend checking out The Toy Insider to stay up to date on toy releases, whether you’re a parent with tiny tots to entertain, or someone, like me, who lines their shelves with figurines, Funko Pops, and themed board games.

Basic Fun has a lot of cool retro toys like Care Bears, Lite-Brite, and the stuff that probably ended up at a garage sale courtesy of our parents (unless if you got cool nerd parents who keep that stuff intact) These TVs (which actually work!) are a true nostalgia trip, right down to the fact that you can sit them in appropriately made backdrops. The first four TVs, which play Friends, Back to the Future, the classic Adam West Batman, and South Park will be available at Walmart this July. This October we’ll see the release of Family Guy, Big Bang Theory, Star Trek, and Bob’s Burgers.

As soon as I saw the Bandai booth I knew they’d deliver on some cool anime toys. First, there’s the Anime Heroes line, which offers us highly detailed, fully posable figures from some of our favorite series. 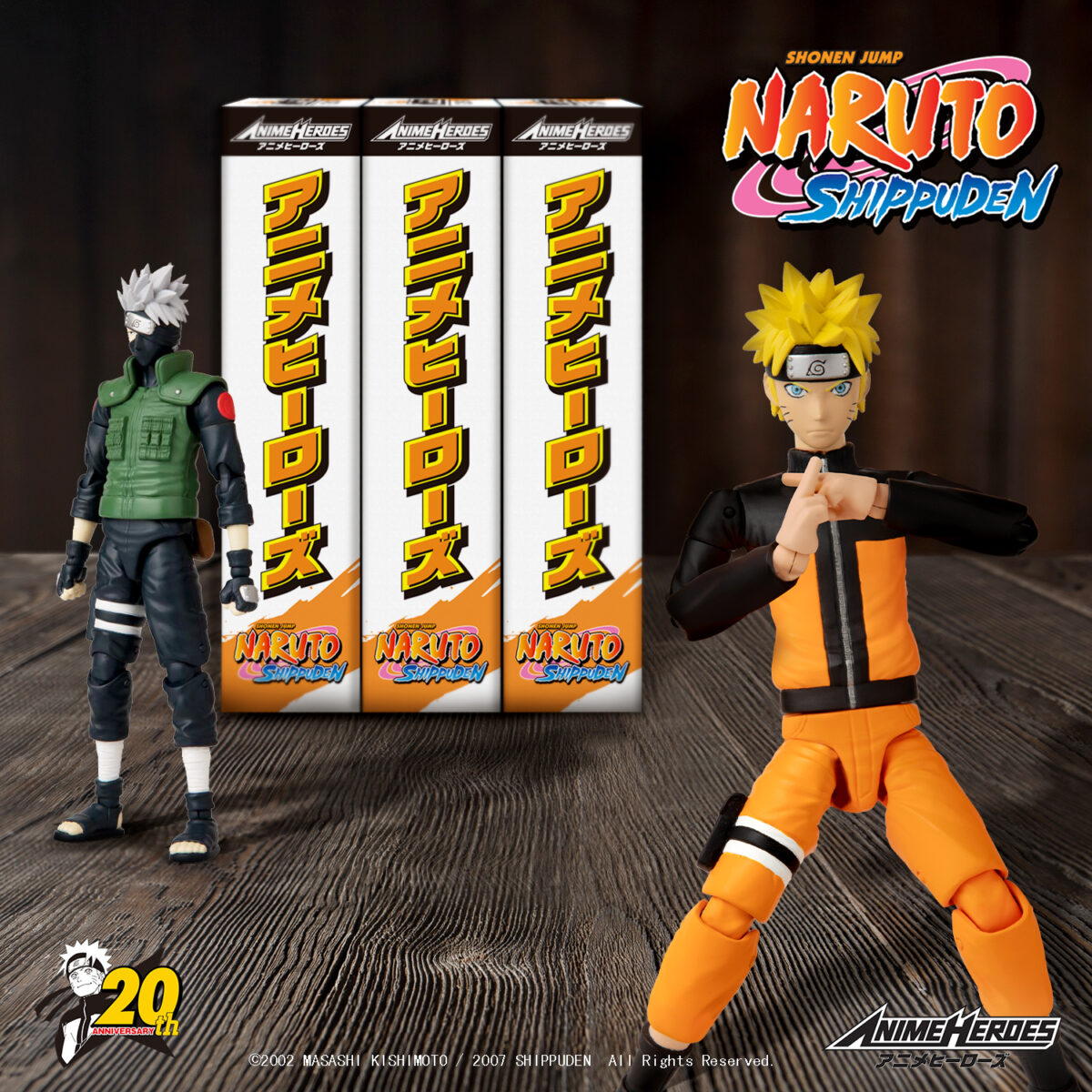 Currently, Bandai has figures available from One Piece, Naruto, Saint Seiya, and when I spoke to them they hinted at more series to come. 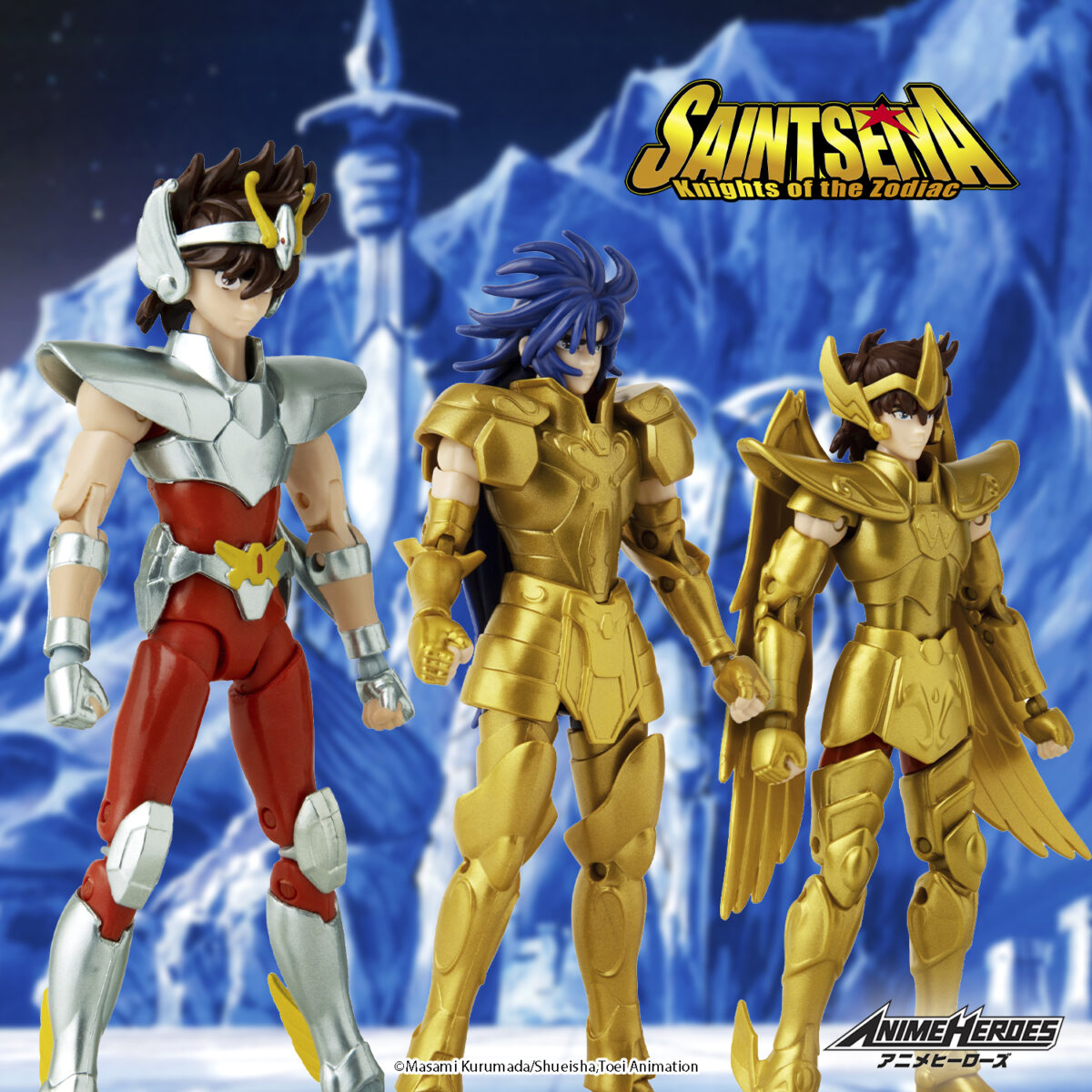 Of course, you can’t have an anime figure presentation without a little Dragon Ball, right? 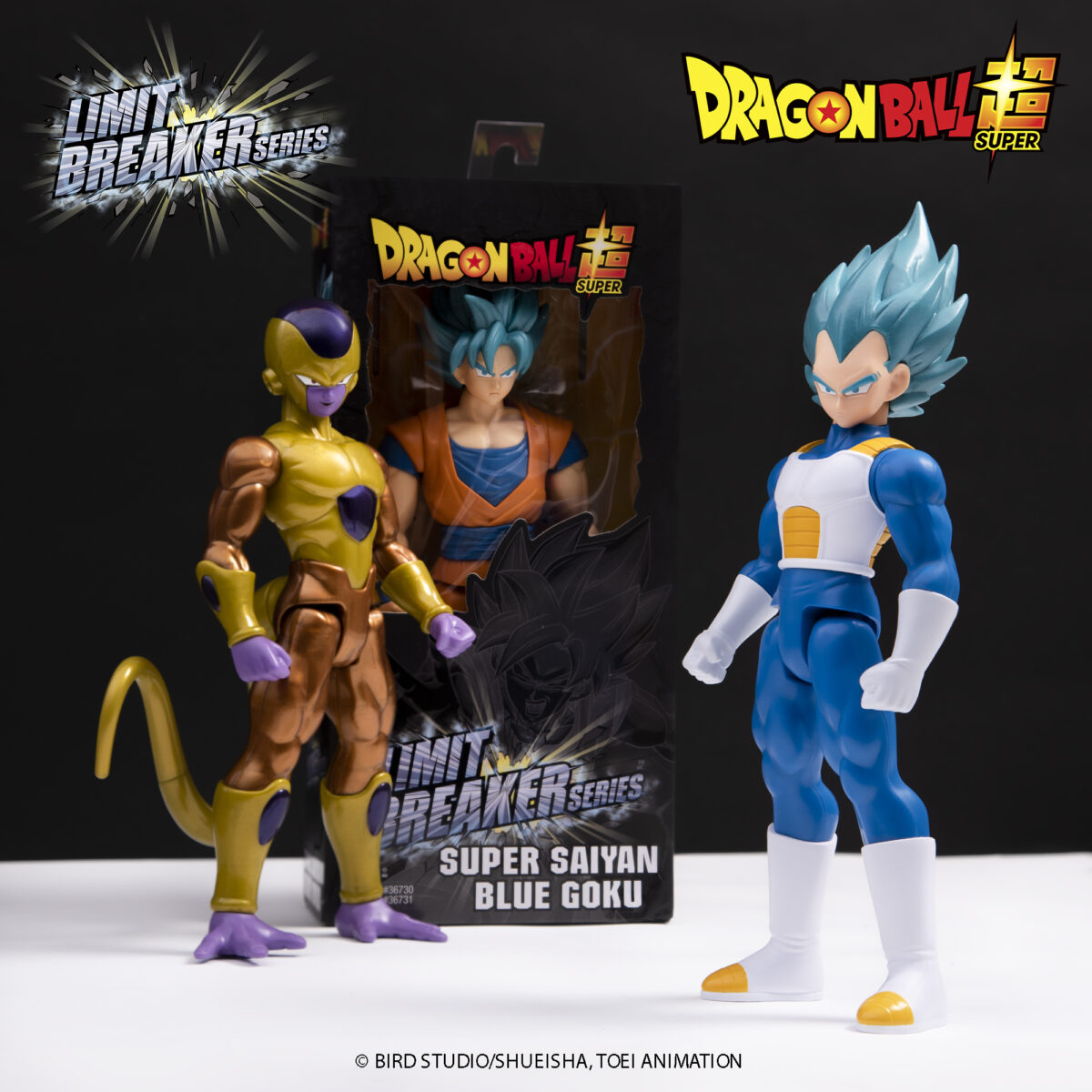 After that, I was introduced to the Charation CUBE series. 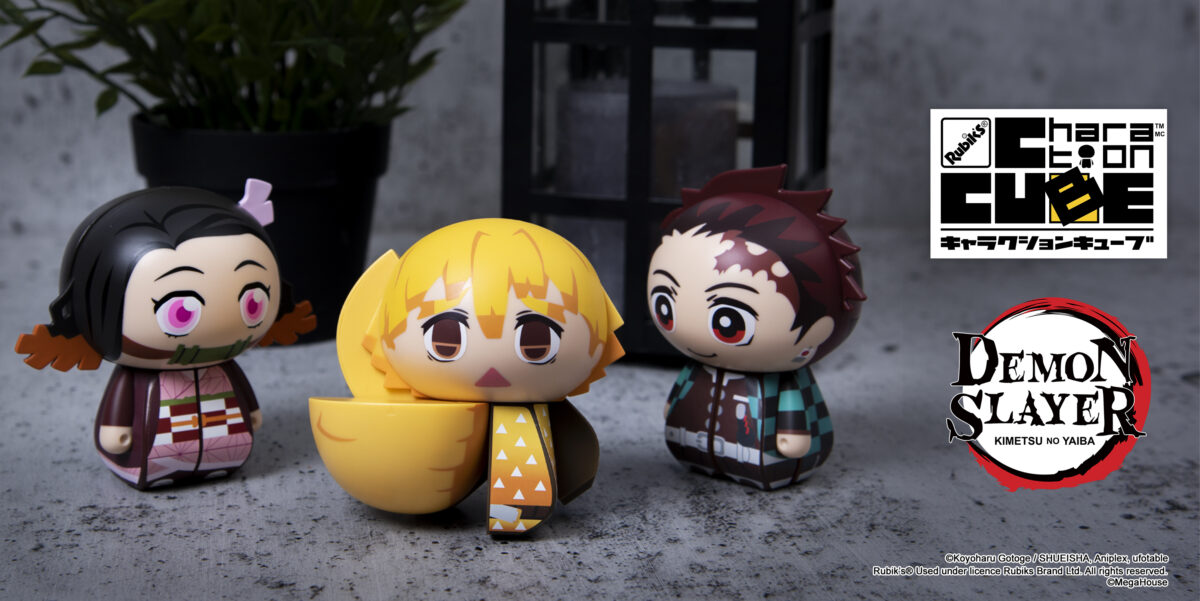 Part Rubik’s Cube, part adorably detailed figure, this series of toys turns your favorite characters into a puzzle you can solve (or not if you just want to leave them as is in the box). Both Demon Slayer and Hello Kitty are available now and come August, the Dark Knight will come descending from some high building in a gothic city. 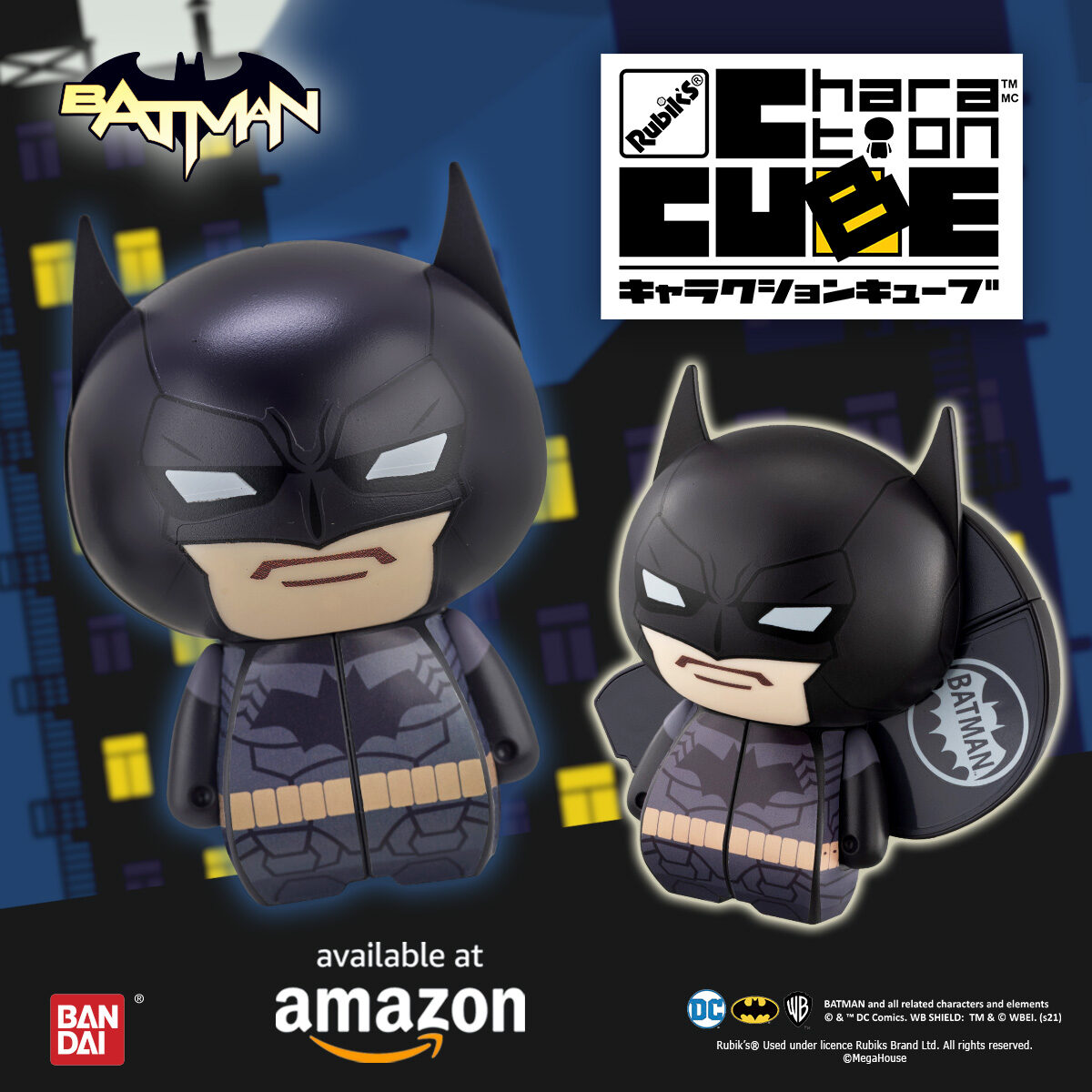 The games from Exploding Kittens 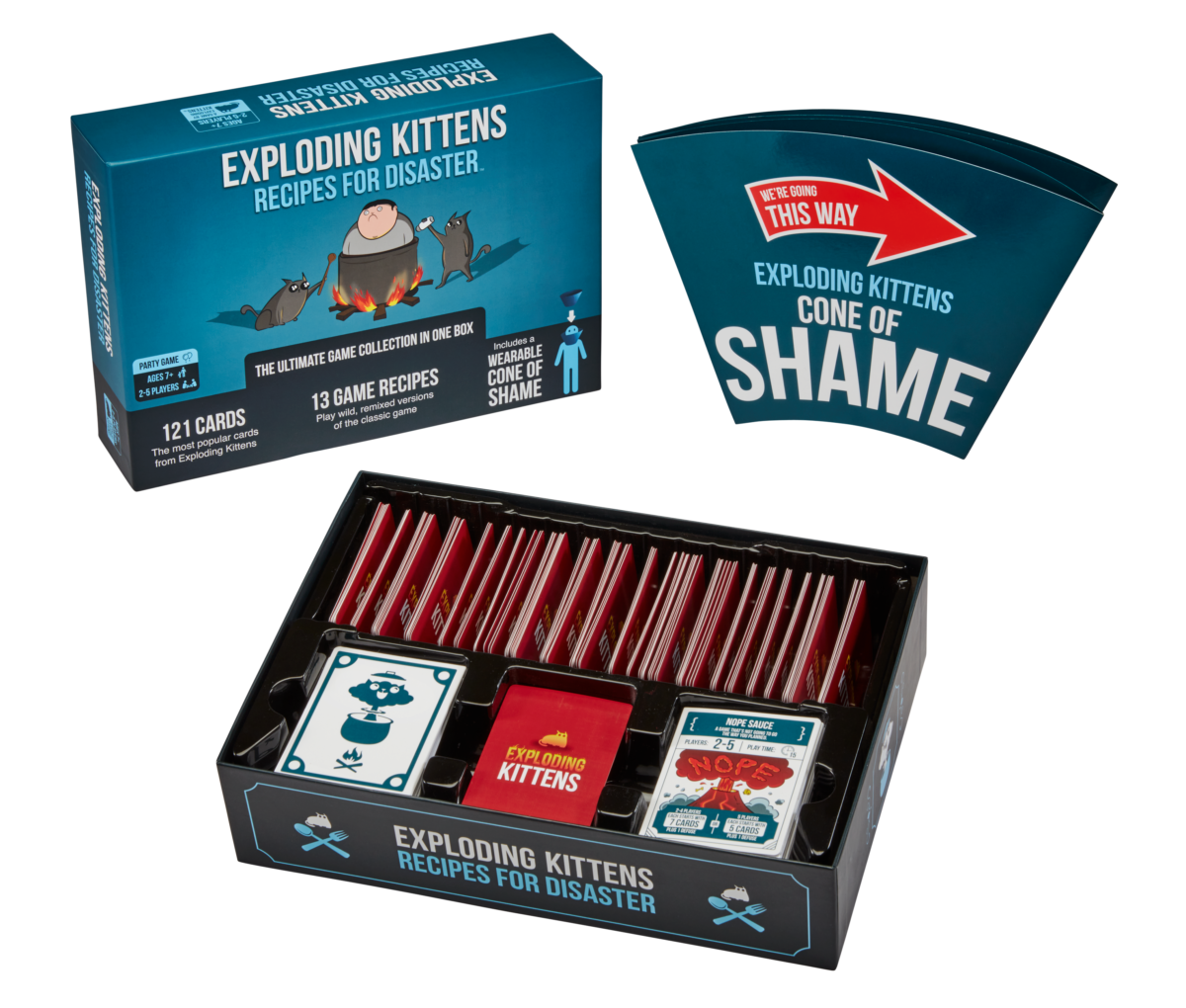 A game series that may very well have the most “wait HUH?!” title out there, Exploding Kittens is a game series for people who, quote, “are into kittens and explosions and laser beams and sometimes goats.” While there is a version of the game for Minions (yes, the Despicable Me variety), what I was most excited to see was Exploding Kittens: Recipes For Disaster. This is the ultimate collection of the series in one hefty box, featuring 121 of the best cards from the original game and its expansions.

I’m also curious about Throw Throw Avocado, where you collect cards, play cards, and, well, throw avocados at your friends. A sequel to Throw Throw Burrito, which is the world’s first dodgeball card game, this game claims to be family-friendly, but obviously, they don’t know MY family very well. 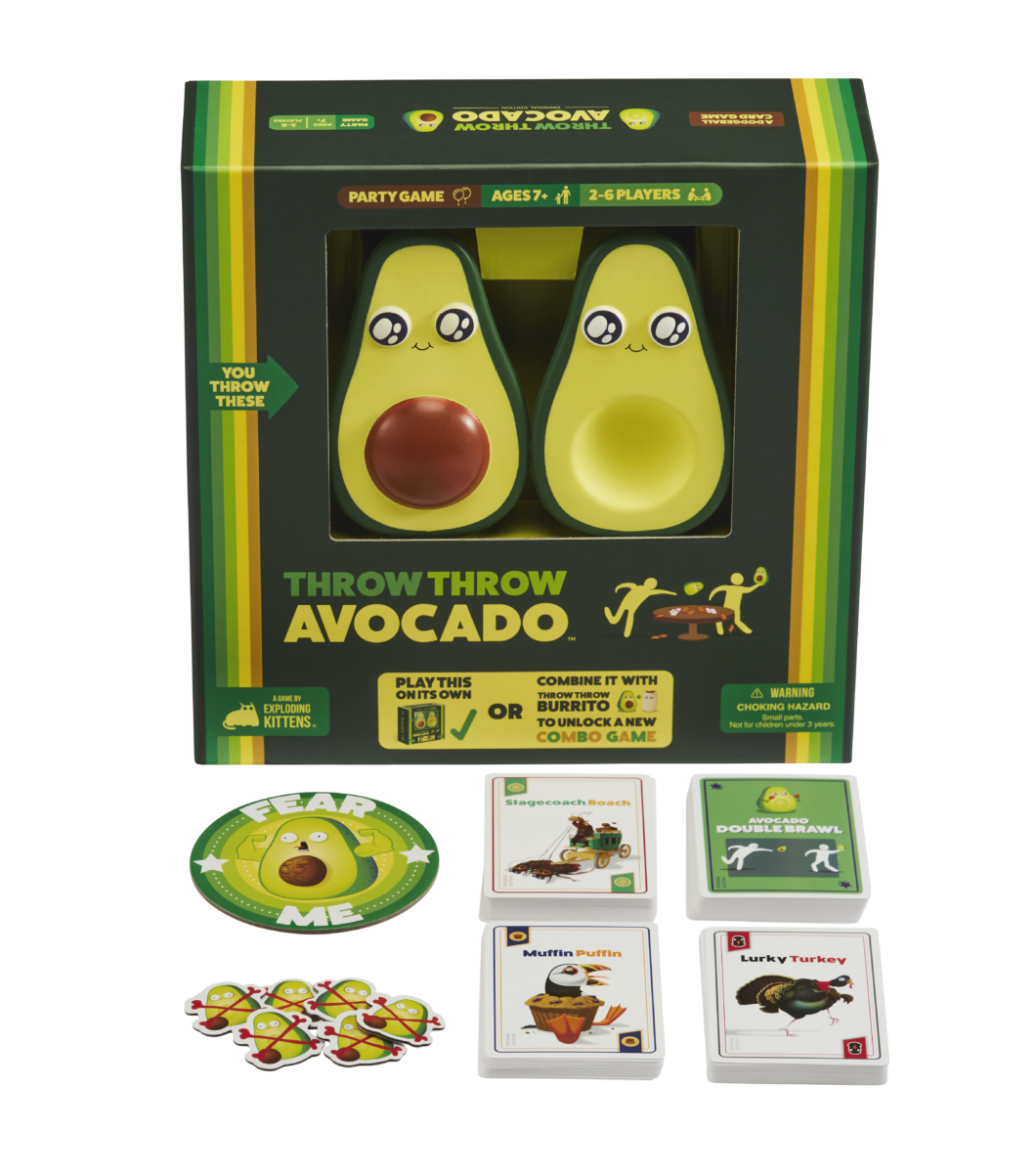 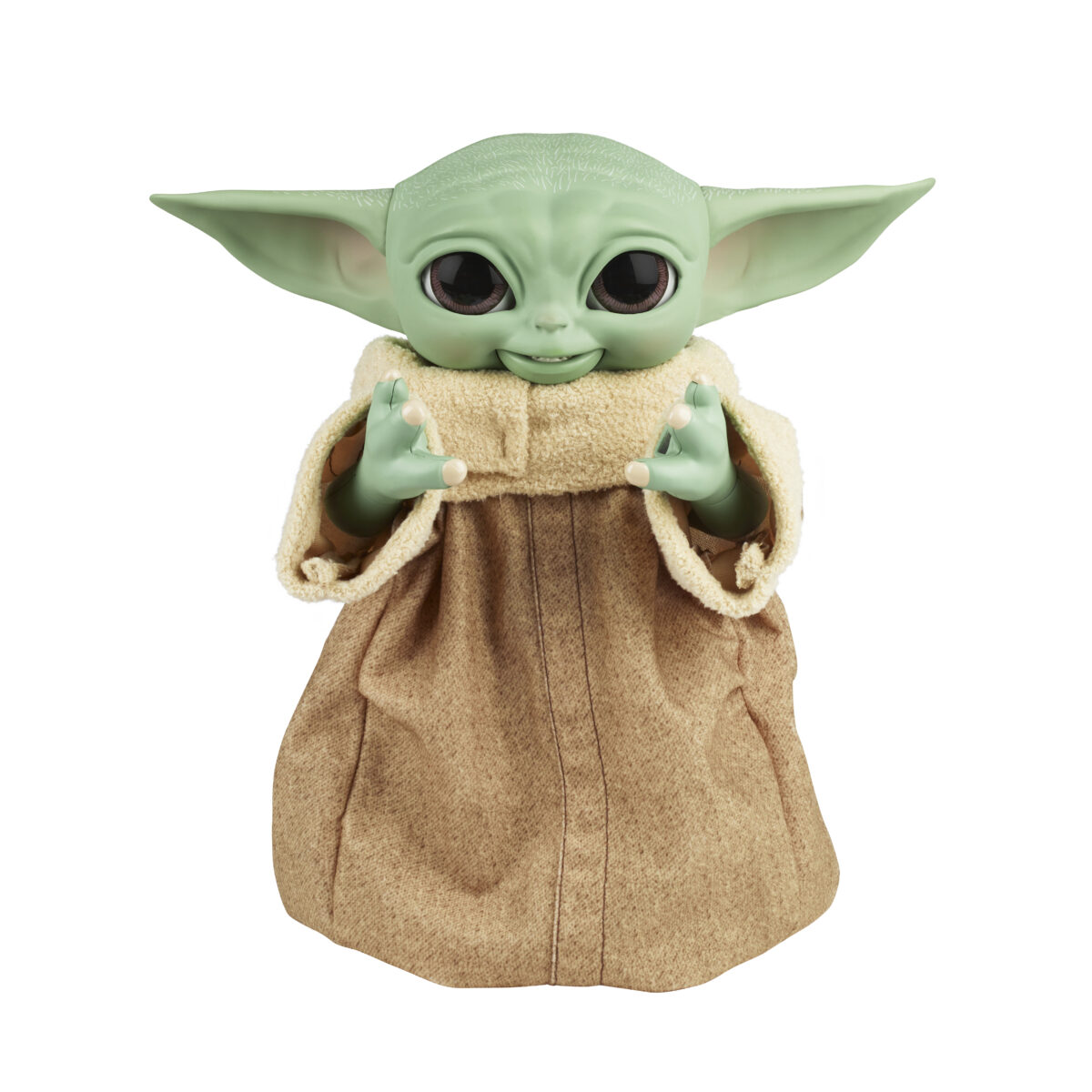 Honestly, Hasbro (more specifically, Hasbro Pulse) always has cool, geeky stuff, but my Star Wars brain couldn’t focus on anything else but this Grogu toy, especially when I saw these details about it:

With a galaxy of features, including adorablesounds, fun animated motions, and interactive accessories, this STAR WARS GALACTIC SNACKIN’ GROGU animatronic toy is ready for action andadventure! Place any of the included entertainment-inspired accessoriesin hishand and he’ll react! Put an accessory in his mouth, and he’ll make eating sounds that let you know if he thinks it’s yummy or yucky! When GROGU (THE CHILD) wants to be picked up and held, he’ll reach up with both arms. And with Force activation, GALACTIC SNACKIN’ GROGU will perform a 2-handed Force move, inspired by scenes from season 2 of the live-action series THE MANDALORIAN on Disney+! Additional features include series-inspired sound effects, a premium soft goods robe, moving head, ears, arms, and blinking eyes! Includes figure, 4 interactive accessories, and instructions.

Well, that’s an insta-purchase for me. 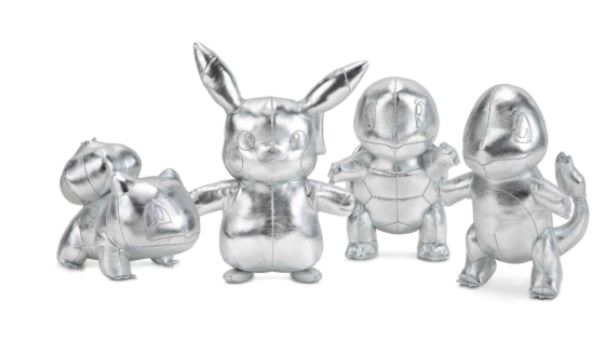 I’ve talked about this company before, which’s had a steady release of Pokémon products for its 25th anniversary. These two products, in particular, pay tribute to the original starting lineup before we realized there were way more than 150 of these little critters in our future. Jazware is offering silver 3-inch figures, and silver 8-inch plush, of Pikachu, Charmander, Bulbasaur, and Squirtle via select retailers. 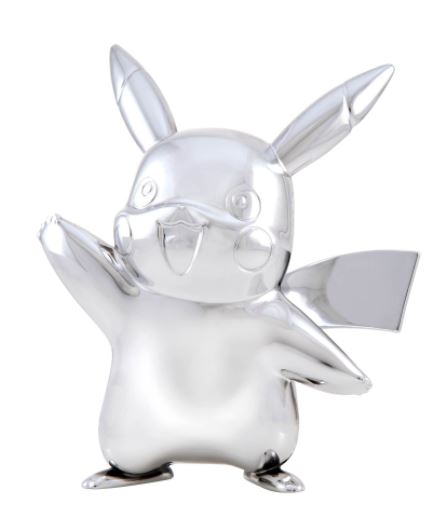 All the Lego stuff

Oh, Lego. You truly do understand me. Their booth offered a variety of fun sets, including that Luigi one that’s shown in the video above, to some cool Avengers builds like this: 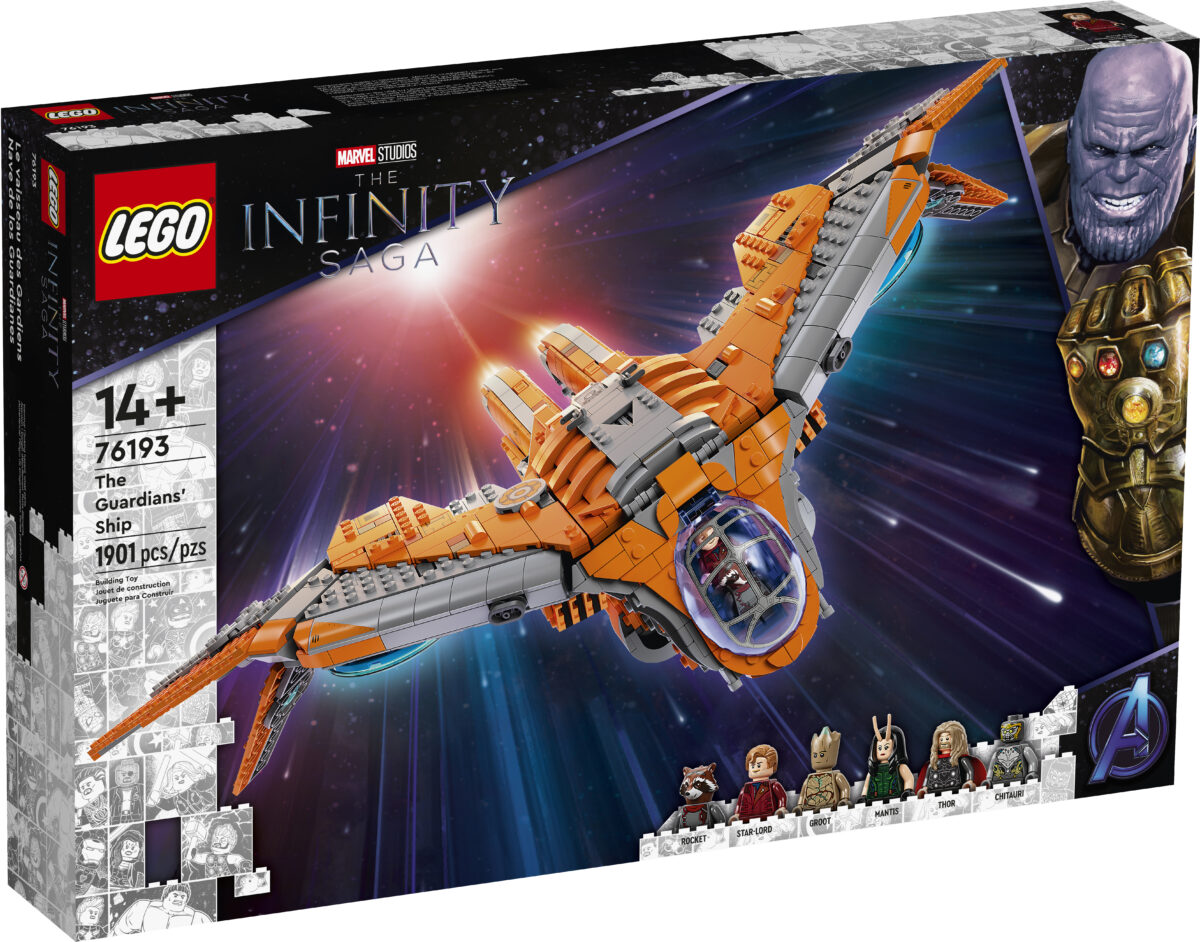 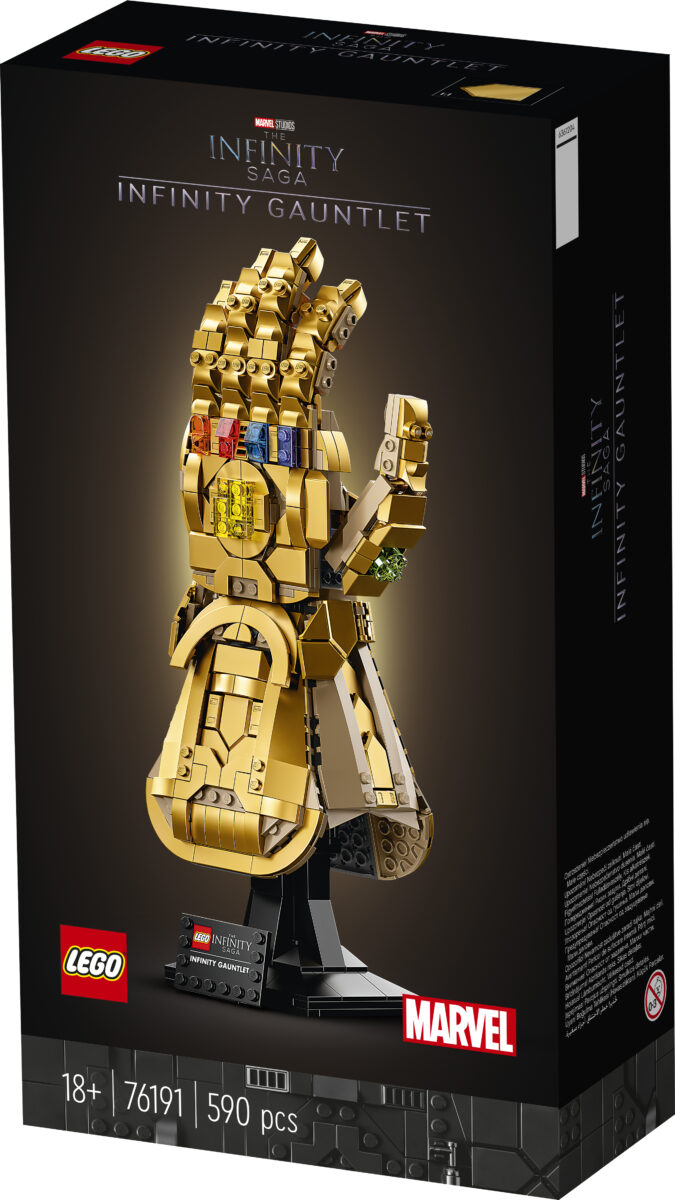 Because, of course, Nintendo 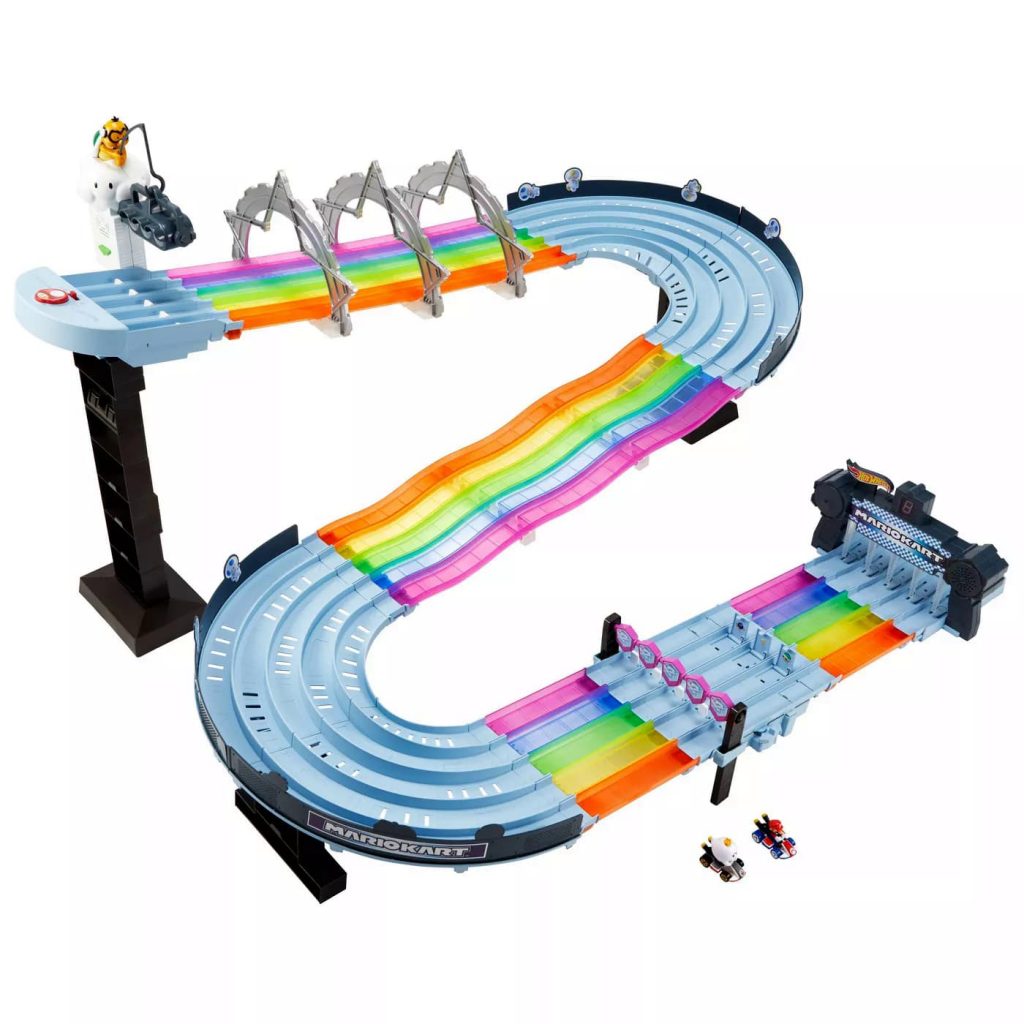 There’s a bit of crossover here since the Luigi Lego set was also at this both, but that wasn’t the only thing Nintendo was showing off. Along with giving demonstrations of Nintendo Switch games like Mario Golf: Super Rush, there were two other products that caught my eye. One was that version of Rainbow Road I have pictured above. The Hot Wheels Mario Kart Rainbow Road Raceway Track Set is probably the only version of the course I wouldn’t curse about too much (unless if my cats tries to climb over it)

The next item combines Animal Crossing and Monopoly, which I’m sure Tom Nook is proud of. 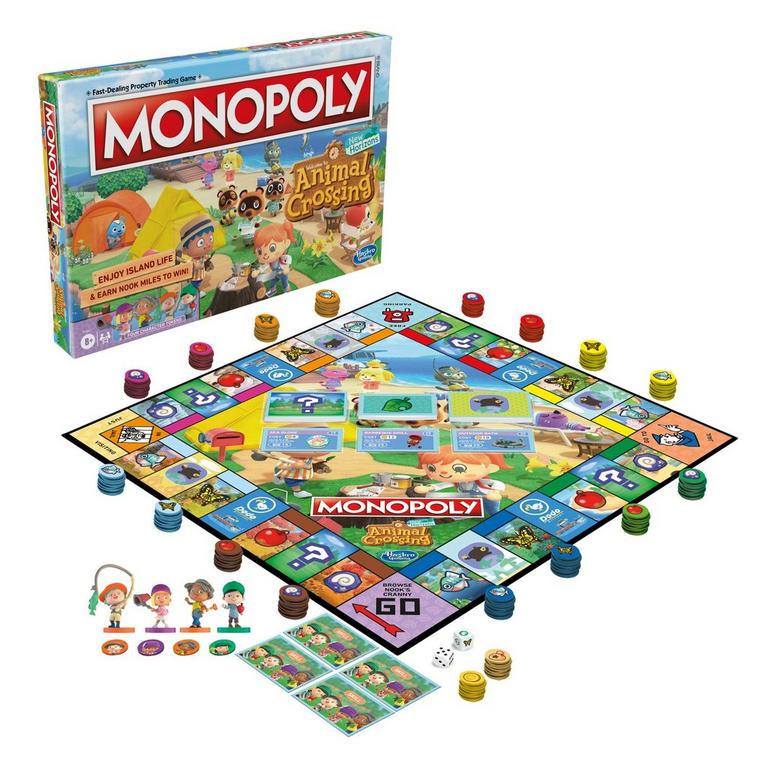 These chess sets from The Noble Collection 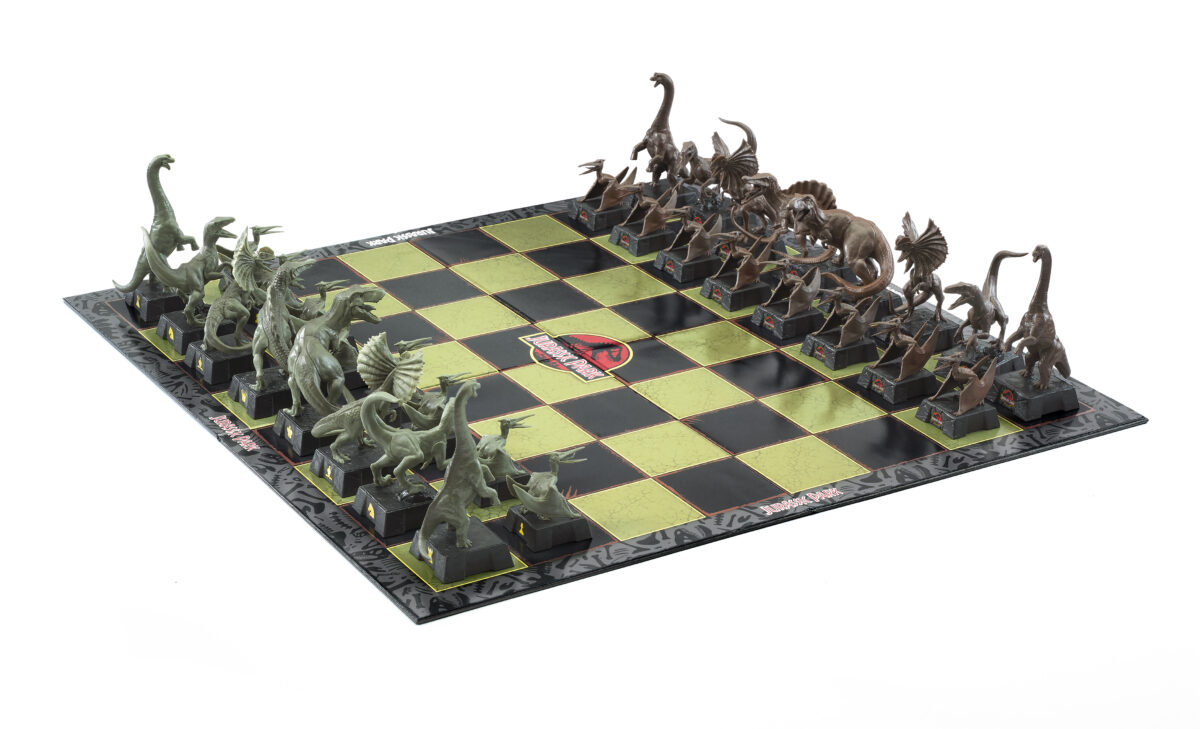 Real talk: I didn’t realize how much I needed a prehistoric dinosaur-themed chess set until now.

The Noble Collection is not only making a beautiful Jurassic Park-themed chess set that is perfect for fans of the franchise or fans who have good taste in dinos, but they are also making this REALLY cool Star Trek chess set. 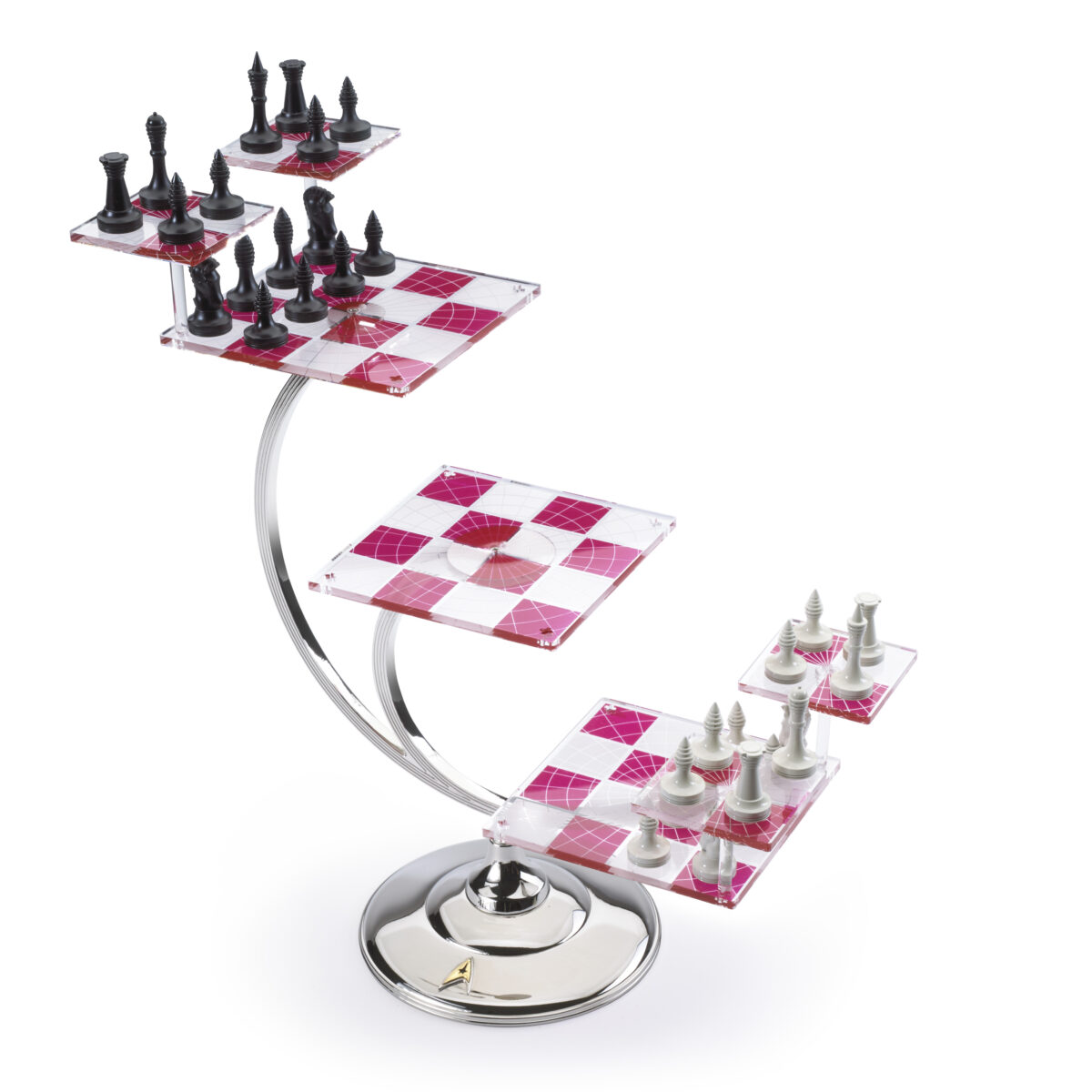 I don’t even know how to attempt to play chess like this but it looks amazing! 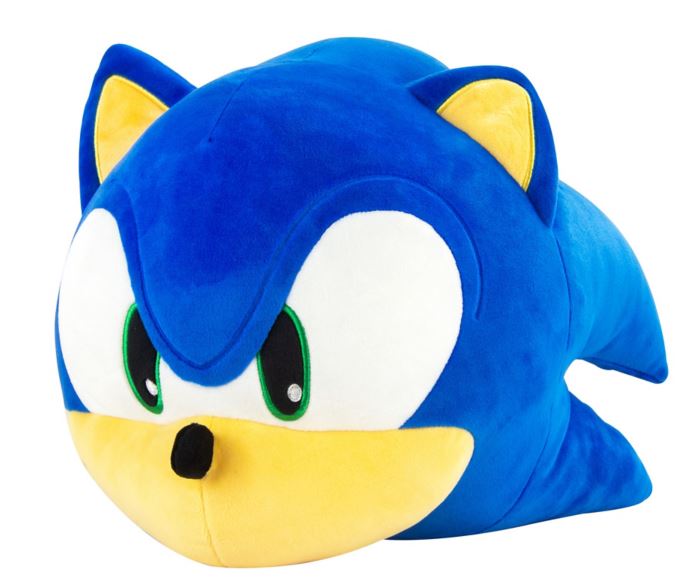 Tomy had SO many plush toys to look at, but this Sonic one is, wait for it, WAY PAST COOL! Also, it’s his 30th anniversary, so this is a perfect way to commemorate the occasion!

This completes my list of the toys that I fangirled about while at the Sweet Suite @ Home event. Are any of these toys must-haves for your own collection? Was there another toy from these companies, or the event, that caught your eye? More importantly, how do you decide which ones to keep in the box and which ones to open?