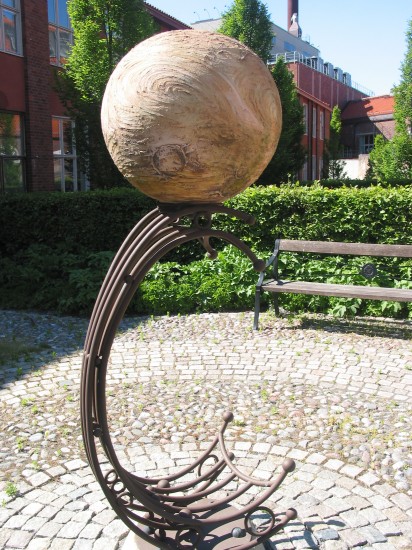 At first, I thought this was yet another Wikipedia defacement and some kind of Swedenophile had changed around the page on Sweden to make it the center of celestial neighborhood. Thankfully I was wrong, and what you’re looking at is the world’s largest scale model of the solar system. Starting with the sun, as represented by Ericson Globe building in Stockholm, the 1:20 million scale model spans the entire length of the country. 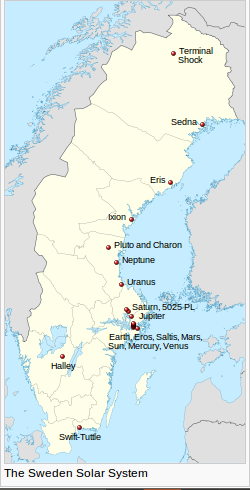 Moving northward along the Baltic sea from Stockholm, the model includes all the planets and several other objects in our solar system. Dwarf planets, like Pluto, asteroids, and even Haley’s comet are represented. So far, the single furthest point is a marker for the terminal shock, the edge of the heliosphere, about 950 km from the “sun” in Stockholm. That’s a brisk 10 day, 15 hour walk. But keep in mind, that’s 20 million times shorter than the actual journey.

Each of the objects represented are, generally, quite artfully done. The trans-Neptunian object 90377 Sedna is represented by a sculptured hand supporting a large glass sphere. Mars is 35cm copper sphere connected to an image of the Earth, and made out of typical Martian materials. Our home, the seat of all human history, is a 65cm model in the Natural History Museum, with an elaborate Moon bolted to the wall elsewhere in the museum.

Of course, no model is perfect. For example, the Voyager probes are sadly absent. And you can bet I would not be satisfied unless the probes actually moved at the correct speed. Of course, given the scale, they’d be specs of dust on the back of one-legged turtles, but that’s a small price to pay for accuracy. Get on it, Sweden.