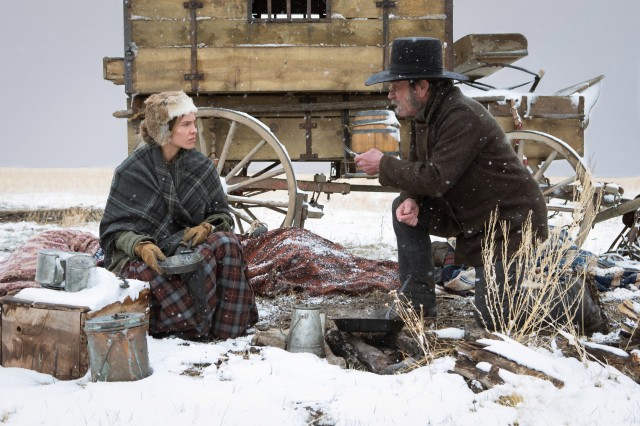 The Homesman is a Western with a feminist slant—and while our reviewer didn’t love it, both Hilary Swank and her co-star and writer/director Tommy Lee Jones feel very strongly about the film’s message.

Speaking at the Loyola Marymount University School of Film & TV, Swank pointed out that she wanted to make this “feminist movie” because things today aren’t entirely so different for women then they were on the frontier.

To me it’s about the objectification and trivialization of women. And it takes place in the mid 1800’s. But us women know exactly what that feels like right now in 2014. So even though talking about gay, lesbian, transgender issues and how far they’ve come, same with equality for women and how far we’ve come, yet how far we still need to go. So that was something that I really, really related to. And loved right off the page.

Noting that gender equality is far from achieved, Swank said that her male counterparts will make ten times the money she makes for a film.

Not double, but 10 times for the same job. We only have this much left for the female actress. I mean, there’s two genders on this earth. Both are compelling, interesting, diverse, wonderful in all their own separate ways. And yet there’s an influx of male roles and there’s just not for women.

Swank also noted that she thinks it’s great that Tommy Lee Jones, who she says people often seen as “rough,” is helming this feminist story. Jones himself spoke up about the themes of the film and his focus on gender equality. Saying that his film is “the inverse of a conventional western,” it was important for him to focus on “women, not men” and manifest destiny.

I don’t think there’s a woman [today], not one, who hasn’t been objectified or trivialized because of her gender at one time or another. And that’s really what our movie is about.

“It would not be unfair to call it [a feminist film],” finished Jones, “but I’m not looking for labels.”

But here at TMS, we love the feminist label, so we’re going to go ahead and slap one firmly on The Homesman.

(via THR, The Guardian)