In a glorious update of a previous story, two suspects have been arrested after allegedly robbing a troop of Girl Scouts of their cookie money in Texas. You may recall that the girl pictured above on the left, Iravia Cotton, punched one of the suspects in the face before he got away, and that the girl pictured on the right, Rachel Johnson, was dragged by the culprits as they drove away. The latter also wished that the thief “had a scar” following the face-punch. While there was no talk of scars, the cops believe they have identified the jerks who took hard-earned cookie money from Girl Scouts.

Going by witness accounts, tips, and surveillance video, cops believe they’ve got their men: one, a juvenile, was not identified, but this guy, 18-year-old Justin Rogers-Zenon, is the other thief: 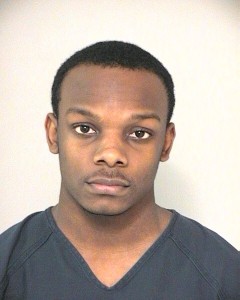 Congratulations, Justin Rogers-Zenon! Now everyone knows you and your friend tried to rob Girl Scouts!

Zenon was turned in by a relative on Thursday night and was released from jail Friday morning after posting $10,000 bond. His unidentified accomplice, who is said to be 16, remains in a juvenile detention center.

It was first thought that about $200 was taken from the Scouts, but cops say it was closer to $50 to $100. Last Sunday, the supposed getaway vehicle, a Toyota Camry, was spotted at a gas station. After comparing images from the surveillance video at the Walmart store in Fort Bend County, the unnamed suspect was identified as the driver of the car and arrested.

The robbery garnered national attention and the troop, the Girl Scouts of San Jacinto, received donations from all over the country to replace their lost money. The Scouts, going by the rules, replaced the lost money and donated all other incoming funds to other troops who could use the money.

“We are both thankful and relieved to learn the two cookie theft suspects have been arrested,” said Connie Chavez with the Girl Scouts of San Jacinto Council. “Our priority continues to be the safety and well-being of the girls and this news is helpful as they try to put the incident behind them. The troop has been overwhelmed by the outpouring of support from our community and the girls are looking forward to attending Girl Scout summer camp in a few months thanks to donations they have received from across our community.”

To thank the investigators, the Scouts sent a basket of cookies to the sheriff’s office for all their hard work.

Huzzah! A happy ending for the Girl Scouts!

(via MSNBC, The Houston Chronicle)