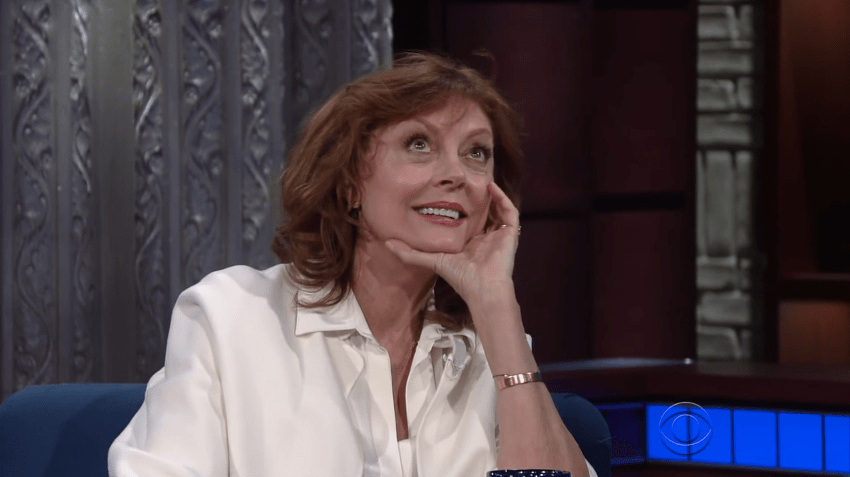 [NOTE: In the Guardian interview I discuss below, Sarandon mentioned that she’s been harassed for her nonsense by people messaging horrifyingly misogynist things at her. I doubt this needs to be said to TMS readers, but … DON’T. DO. THAT. You don’t get to be misogynist to anyone, not even people you don’t like.]

Susan Sarandon has doubled down on her “Trump isn’t that much worse than Hillary”/”economic anxiety caused Trump” rhetoric in a recent Guardian interview, so … here we go again, folks.

In the interview, which took place in – I shit you not – “a private members’ club in downtown New York,” Sarandon addressed her advocacy for Jill Stein by reminding everyone that she voted in New York, which is reliably blue. “I knew that New York was going to go [for Hillary],” she said. “It was probably the easiest place to vote for Stein. Bringing attention to working-class issues is not a luxury. People are really hurting; that’s how this guy got in. What we should be discussing is not the election, but how we got to the point where Trump was the answer.”

Ugh, this point again. Even though the “economic anxiety” of Trump voters is a frequent talking point, the numbers don’t suggest that it was that simple. Racism and sexism were far better indicators of who voted for Trump than class or economic anxiety. Working class people of color suffered enormously after the 2008 recession, and they still did not vote for Trump. But I guess they don’t exist? Or the ways that they, too, are really hurting aren’t worth discussing? Come on.

Sarandon also said that, under a President Hillary Clinton, “We would still be fracking, we would be at war [if she was president]. It wouldn’t be much smoother. Look what happened under Obama that we didn’t notice.” (Charitably, one interprets the “still” as implied for “be at war,” since the United States has been at war for over 15 years now. Less charitably, she forgot we’re currently at war.) Assuming the most generous interpretation of her comments, these are all fair enough points – except for the language of “wouldn’t be much smoother.”

Sarandon is making a real point under the glibness. Clinton was certainly a centrist, and as someone who voted for the Iraq War and palled around with Kissinger, she was something of a hawk. As Americans, we own all the horrible damage our government does abroad (just look at Yemen right now), and it’s disturbing when Democrats go along with imperialist interventionism. But the idea that things “wouldn’t be much smoother” is an incredibly insensitive and privileged statement to make when you consider the damage that Trump has done to immigrants like the DREAMers or Haitians on TPS, to trans students who just want to use the facilities in peace, and to every single poor and elderly person who relies on Medicaid and Medicare.

Their pain is important and consequential, and so are their struggles, and to toss off their suffering this way is gross. One can point out Hillary Clinton’s flaws; one can argue that Bernie would have won, that the Democratic party is doomed unless it embraces real change, and that money and war-mongering are driving far too many decisions on the so-called party of the left without trivializing the harm that Trump has done. This is really all she needs to do for people to chill, and yet she repeatedly fails to do it. Thousands of leftists manage this balancing act every day, ripping into Obama for his drone programs and deportation machine while still acknowledging that it’s incredibly important that U.S. children with cancer are no longer expected to pay up or die, but Sarandon has no interest in this sort of framing. She’d rather diminish the suffering of marginalized people in order to make a more hyperbolic point about Clinton – but you can easily make that same point without being smug and dismissive.

She also frequently treats the two things as mutually exclusive; anyone who mourns the suffering of the marginalized under Trump, and rages against those who contributed to it, is just a centrist shrill who’s ignoring the “real” issues. And yet, she doesn’t want the same scrutiny applied to herself. She wants to be able to trivialize the deportation of DREAMers as a bit of extra “smooth[ness]” but then also have her tweeted concern for them applauded as earnest and wholehearted. You can’t have it both ways.

Her comments about feminism, Weinstein, and the way forward also get very weird and victim blame-y here. “I think the secret is maybe now we have to just say no one is going to fix it for you,” she says, sounding like a bootstrapping Republican. “It’s up to you to fix it. You have the strength. You shouldn’t turn to be validated by anyone, male or female. You carry your power within you, and if you surround yourself with people who respect you, that will happen, be they male or female.”

Or –  just hear me out on this one – we could focus on addressing systemic problems with systemic solutions, rather than blaming women for the effects of sexism and telling them to fight misogyny by drawing on their inner strength?

There are nuggets of truth to what Sarandon has to say, but she keeps wrapping it all up in this privileged dismissal of other people’s pain. And so she keeps getting called out.

(Via The Guardian; image via screengrab)