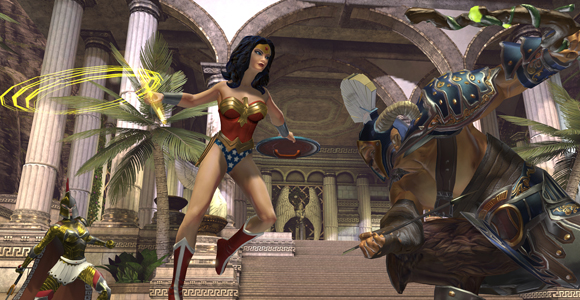 Susan Eisenberg. Do you know her name? You should. She’s Wonder Woman. More specifically, she’s the voice of Wonder Woman for countless DC animated projects including the Justice League/Justice League Unlimited television series. Now she’s taking on the Amazon again for DC Universe Online’s latest DLC, Amazon Fury. We got to pick her brain on her past voice work, video games, and Wonder Woman’s place in our world.

The Mary Sue: At conventions, people who dress up as Wonder Woman get some of the best reactions from the children in attendance. I would imagine when you make appearances you get a lot of adults expressing their appreciation for your work since they’re more prone to recognizing you for the work you’ve done. A lot of fans consider Kevin Conroy “their Batman,” do you experience “their Wonder Woman?”

Susan Eisenberg: Hi Jill. I’m am beyond thrilled that you’re conducting this interview with me! [Editor’s Note: *blushing*]

As for the attention, there is a lot more from adults who’ve watched the movies, played the games, or seen the TV shows, but a lot of times they’re at the conventions with their kids. And when they explain to them that this IS Wonder Woman, I can see the disconnect on their faces because clearly, I’m not brunette or an Amazon, but when they hear the voice, there emerges a slight smile of recognition, and that’s the jackpot! What has also been very rewarding is meeting young fans in their early to mid-twenties who tell me they grew up with “my Wonder Woman.” That is incredibly gratifying to me!

I’m a huge fan of Kevin and Batman, as most people out there know, but I feel that Kevin holds a singular place in Batman’s iconography because of how long he’s been voicing the character. He’s told me stories of going to comic cons before they were well-know, and well before they were popular. But certainly, for me, when I think of Wonder Woman, I think of Kevin as her Batman.

TMS: Wonder Woman was originally voiced by the wonderful Gina Torres for DC Universe Online. What was it like stepping into the famous role again for the latest DLC?

Eisenberg: Well, I’ve always said that any time I get that call asking me to voice her, it is a tremendous privilege. I think if I hadn’t played her already in other shows and games, it would have been harder to step in and far more intimidating. But since I had played her, I felt I knew her voice and understood her character, and that made it much easier to take the role at DCUO. I know the fans love Gina, and I’d like to think there’s room in the DC Universe for all of us. 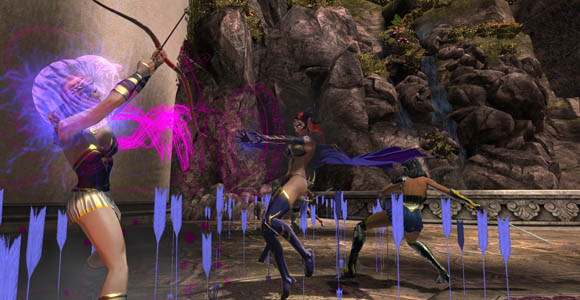 TMS: Can you fill us in on the details of this new storyline? What can players expect?

Eisenberg: Of course! This time out the game will be called Amazon Fury, and it’ll be the first of three stores that involve Wonder Woman and the Amazons. It also introduces Queen Hippolyta, AKA Mom, to the DCUO for the first time. The story involves Hippolyta apparently going mad and joining forces with Circe in declaring war against the mortal world. Wonder Woman rallies her army of Amazons to defend the people of Gotham to help Hippolyta come to her senses.

The player will be able to play as Wonder Woman or Circe.

TMS: Do you know at this point if you’ll be back for more DCUO?

Eisenberg: I do know that this is a trilogy, so barring any unforeseen circumstances, I hope to be back. And for any working actor, that is a huge gift!

TMS: Do you have a different creative approach for when you voice a video game character versus an animated series or film?

Eisenberg: Well, with animation you’re usually at the sessions with other actors which means there’s more interaction among the characters. With video games, you’re typically by yourself in a booth with the director, writers, producers all outside the booth. As for my creative approach, it’s typically driven by what I’m being asked to do and how I’m being asked to voice and portray the character. Working on these games and cartoons is very concise work, which isn’t to say it’s not hugely fun, but you’re in that booth to portray a character who someone has written and drawn in a very deliberate way. So it’s their vision, and you’re there to help make that come to life.

Eisenberg: My friend and fellow superhero Kin Shriner/Green Arrow called me one morning and said, “Justice League Unlimited is on the CW,” and I was thrilled! I hadn’t seen a lot of the original episodes in a long time, and I began with a few tweets about something or someone I remembered from that episode, and then I thought what better way to watch the show than with other Justice League fans! As you know, I’m fairly new to Twitter so live-tweeting has been a bit of a learning curve, but the fans have helped me out in a big way. And the writers, composers, directors, and actors have tweeted with us as well. It’s a chance not only to watch the show and have some fun, but also to celebrate the incomparable creative team that made the Justice League what it was and still is. 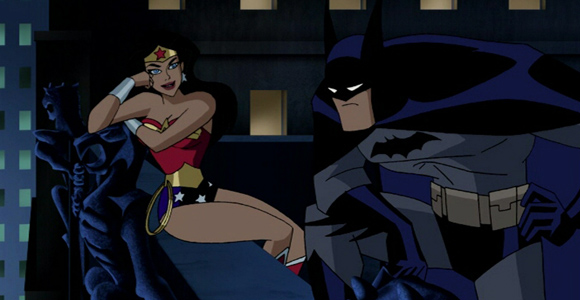 TMS: Was there ever a time you really didn’t like the portrayal of Wonder Woman? Not necessarily one you were personally involved with, but any of the creative takes we’ve seen. You must certainly have a great attachment to her.

Eisenberg: Well, to be honest, I haven’t seen all of her portrayals. Unlike Wonder Woman, I am only human! But I must say that I prefer a more non-violent, more heroic and
compassionate Wonder Woman. Maybe that’s because when I started with the character that’s how she had been developed by Bruce Timm and the writers on Justice League, and so that became my bias. And as an actor, I prefer to play a character who has more depth to her, and subsequently, more emotions to play. I prefer when Wonder Woman is about something… a cause worth fighting for or defending. And, of course, I’ve been lucky in so many of the projects to have had that opportunity!

I’ve already recorded some of the DCUO game, and I loved being able to play scenes with my mother Hippolyta AND with the Amazons, who are fighting the good fight!

TMS: I’d be remiss if I didn’t ask, what are your thoughts on our upcoming, history-making, live-action/big screen Wonder Woman, Gal Gadot?

Eisenberg: I’m not that familiar with Ms. Gadot’s work, but I can say this: I’m thrilled that Wonder Woman will be in a movie. I hope it’s the beginning of a lot more screen time
for the character and for her stories, and I hope that Ms. Gadot succeeds wildly in the role because if she does, we’ll get to see more. There is a lot of pressure on her to do well, but the truth is the character of Wonder Woman will endure whether it’s in this project or future ones! As magnificently as an actor can embody these
characters/superheroes, ultimately they exist as their own creations, and will continue to be in comic books, cartoons, television, film, and whatever medium comes next!

TMS: What do you think of Wonder Woman’s status in the world? Comic book fans obviously appreciate her much like most other characters they read about but she’s so much more than that to people who’ve never even picked up a comic.

Eisenberg: She’s utterly beloved for reasons that are tangible and intangible. Clearly, she’s a woman of high moral standards with an unflinching determination to stand up for what she believes in. I think in all times, but especially darker times, there’s a great need for characters like her because it gives people a sense that there is some goodness in the world. Goodness and morality. And with that, comes hope. And if she can embody that for people, well, that’s a magnificent gift that Mr. William Moulton Marston gave to us. She was not created without purpose, and so I believe the more purpose she has, the more powerful she is. If she can be a beacon for other women, that’s a gift. If she can be a hero for someone who’s being bullied, that’s a gift. And if she’s beautiful and sexy and smart in her pursuits, well, that’s a gift from the Gods.

What’s incredibly gratifying today is how far comic books and cartoons have moved into the mainstream. And so from a niche industry that still struggles in some places, a louder voice has emerged, and it belongs to the fans, and the illustrators, and the artists, and the techies, and the composers, and the cosplayers, and the geeks. And the louder it gets, the more it’ll be heard. And then, we’ll see what happens next…