The Biggest Surprises from Crisis on Infinite Earths So Far 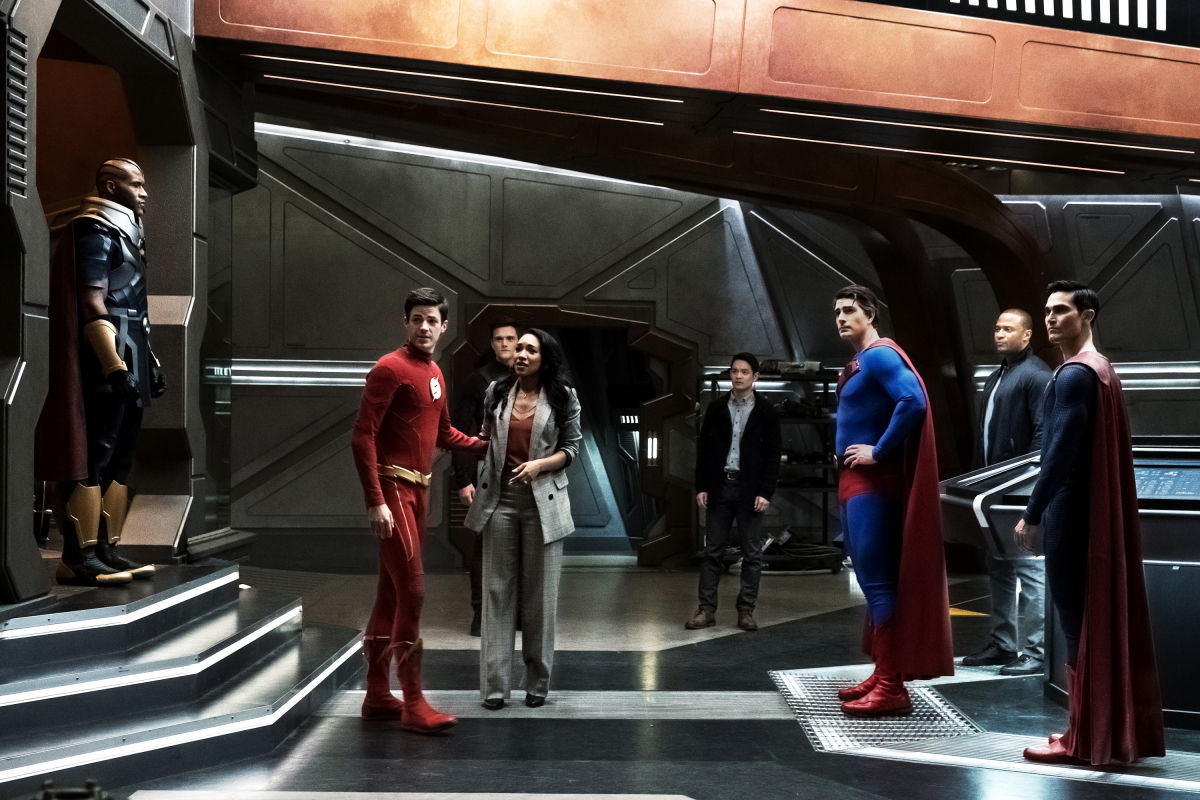 Holy epic three hours of television, Batman! We’ve all seen the first three installments of The CW mega-crossover ever Crisis on Infinite Earths and it was just as big and emotional as we had hoped, and even with so much build-up and thirty plus years of comics to spoil us, there were still a lot of surprises. Some were fun, some were emotional but they all made these first three hours pretty amazing.

One of the characters and actors all of us were most excited to see was Kevin Conroy as Bruce Wayne. This was Bruce’s first appearance on screen in the Arrowverse, and Conroy’s first time playing his iconic role in live-action. Conroy was great as a much darker version of Bruce Wayne from Earth 99, who had broken his one rule about not killing people and thus become a monster himself. 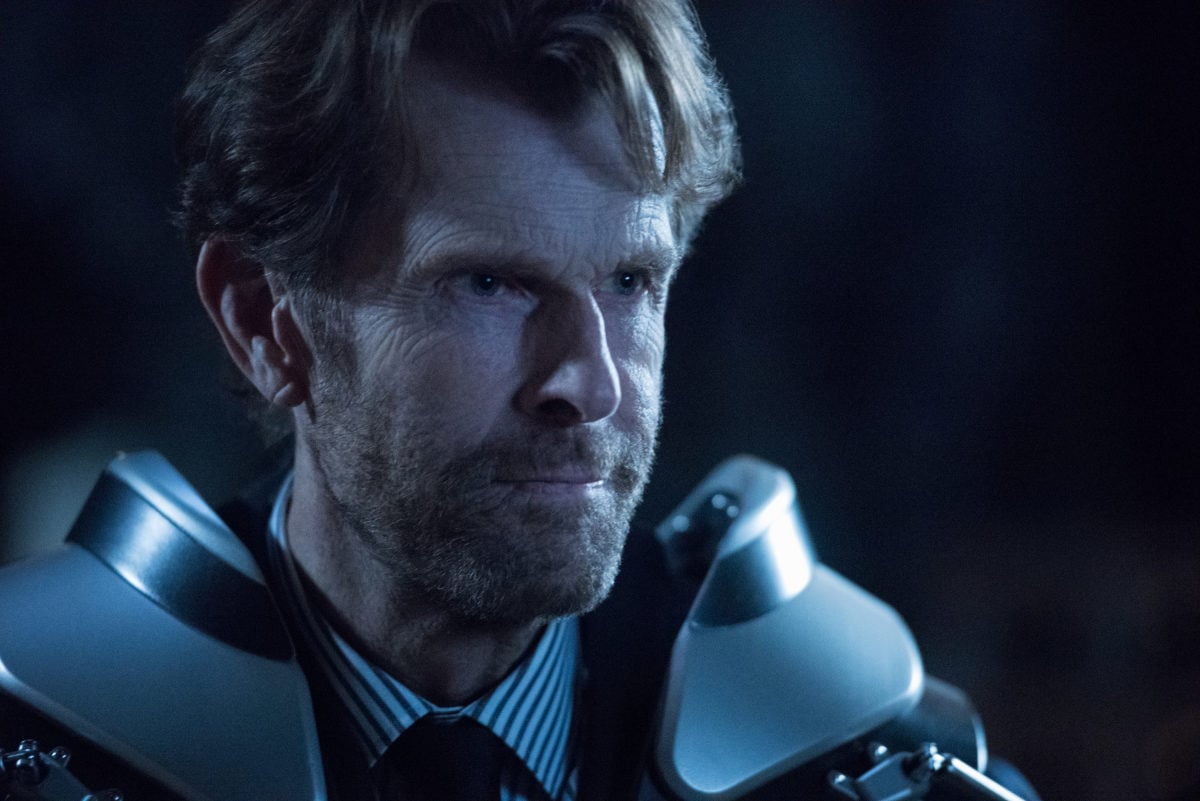 It was a total shock to us the audience and Kate Kane (Ruby Rose) to see a version of the Dark Knight that had gone bad and killed not only his greatest villains, but also Superman himself. Conroy was absolutely chilling in this take on the character and the turn allowed for some serious character growth for Kate, who was admittedly feeling out of her depth among all the other heroes.

The cameos we didn’t know about

All three installments were peppered with looks at various different earths with red skies before they were destroyed by the anti-matter wave, and we got some awesome guest stars that we’d heard about beforehand: Tom Welling, Burt Ward, and Ashley Scott were all there for the fun, but the events also managed to bring the DC movie universe into play with Robert Whul reprising his role as Alexander Knox from 1989’s Batman. We also heard the voice of Oracle (Dina Meyer) in the Birds of Prey segment, after being told she wouldn’t show up.

Also in the mix was an entirely different comics universe: The Tick. While his character was unnamed, Griffin Newman (co-host of the excellent Blank Check podcast) who played Arthur on the now-kaput Amazon series showed up as trivia host in Central City. It was great to see Newman back on screen in a superhero universe, but the best secret cameo came as a truly devilish surprise… 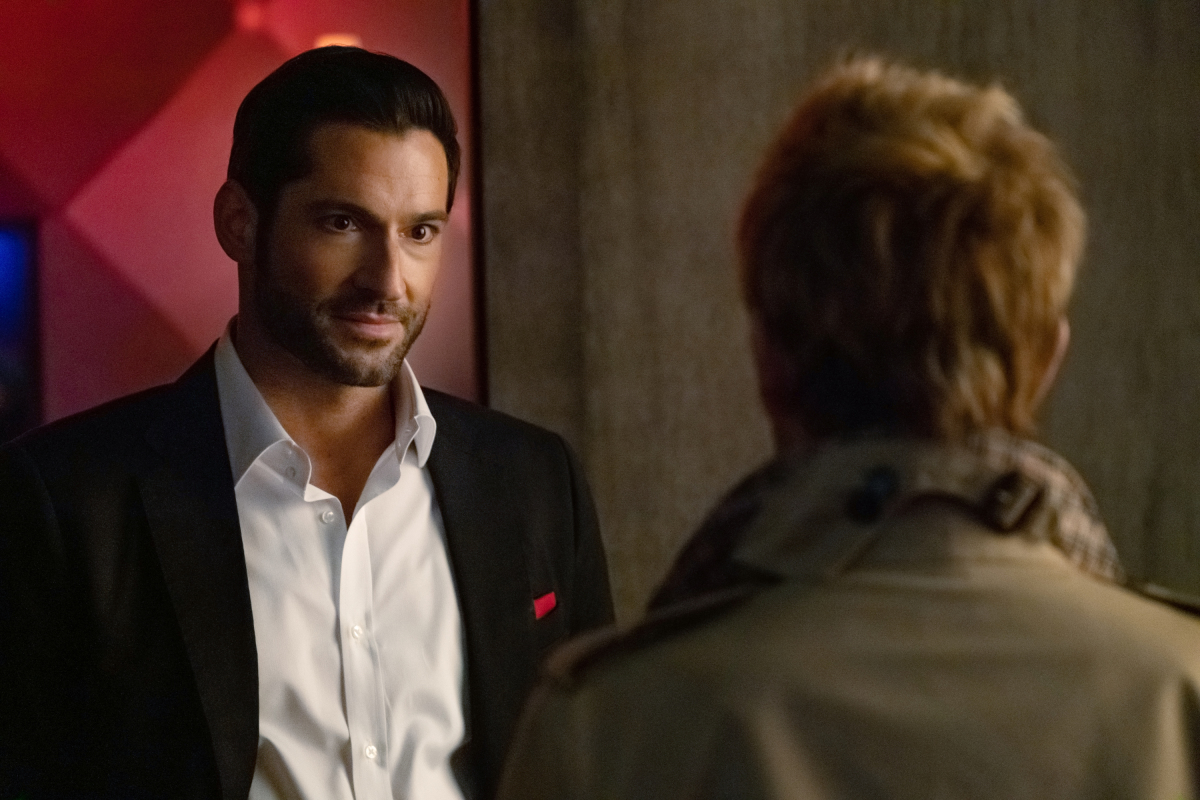 Lucifer! After protesting that he wouldn’t be in the crossover, Tom Ellis showed up as our favorite devil on “Earth 666” to help Constantine with a way into Hell. It was utterly delightful to see Ellis make his Arrowvrse debut, given that the comics his show is based on are part of the DC family. It was particularly wonderful to see him interacting with John Constantine (Matt Ryan).

Oh, and why did Constantine, Mia and Diggle want to go to hell? Because:

We’ve been told since last year’s Elseworlds crossover that Oliver (Stephen Amell) was going to die in Crisis, and this entire season of Arrow has been leading up to his death in the conflict. With Arrow ending, I think we were all expecting Oliver to actually die in this conflict, but the big surprise came in when he died: saving a billion people from Earth 38 in the first hour of the crossover. 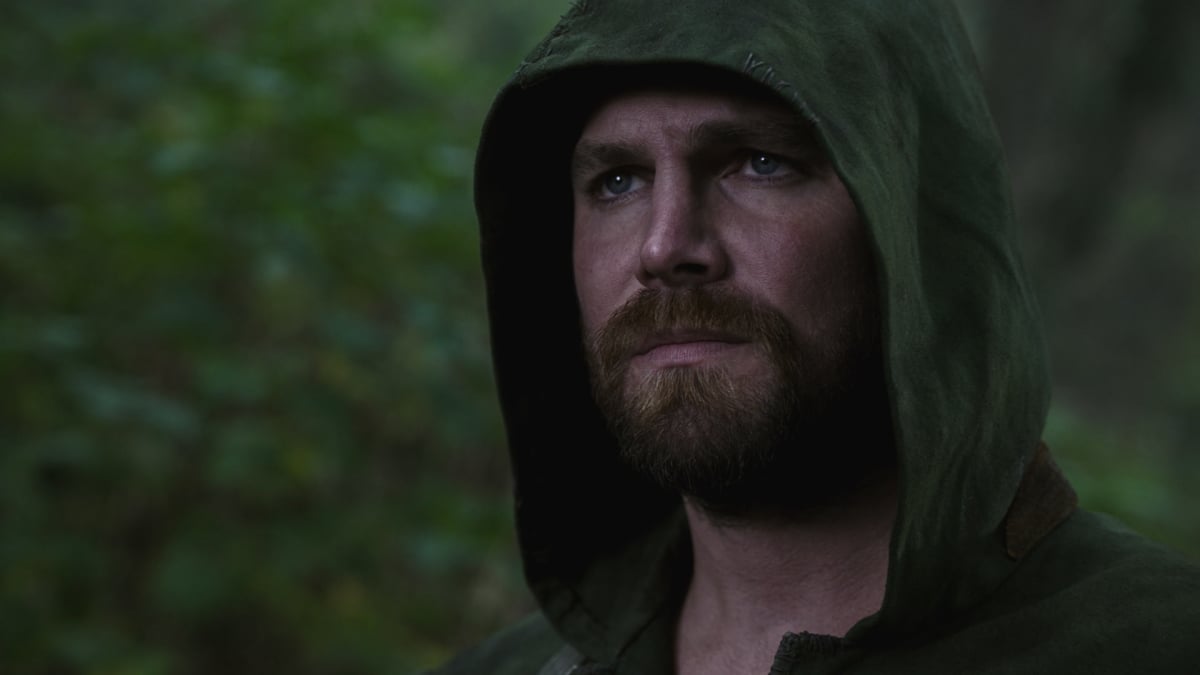 It was a massive gut punch, emotionally, and a brilliant twist that raised the stakes for the whole event. No one was going to let Oliver stay dead, so the quest to resurrect him allowed the story to organically check-in with more supernaturally inclined characters, like Jonah Hex, the aforementioned Lucifer, and, most interestingly Jim Corrigan (Stephen Lobo), aka The Spectre.

This character was seen in a different form on NBC Constantine, but more importantly, the Spectre has nearly godlike powers that were vital to the hero’s victory in the original Crisis on Infinite Earths comic…and Corrigan passed on those powers to Oliver.

So Oliver as The Specter might be the key to saving the multiverse and giving our paragons a fighting chance against the Anti-Monitor. Also, the Specter has connections to another Green Hero who we’ve only heard referenced in Easter eggs…the Green Lantern. Will this bring that storyline into the Arrowverse?

The Flash didn’t die…well, not our Flash

Not only were we told for a whole year that Oliver would die, but we’ve been teased since season one that Grant Gustin’s Flash would vanish in the great crisis, and for a hot second, it looked like that would be the case. After a beautiful goodbye with Iris, our Paragon of Love (Aw!) was ready to jump onto the Anti-Monitor’s treadmill of doom and reverse the Anti-Matter cannon. 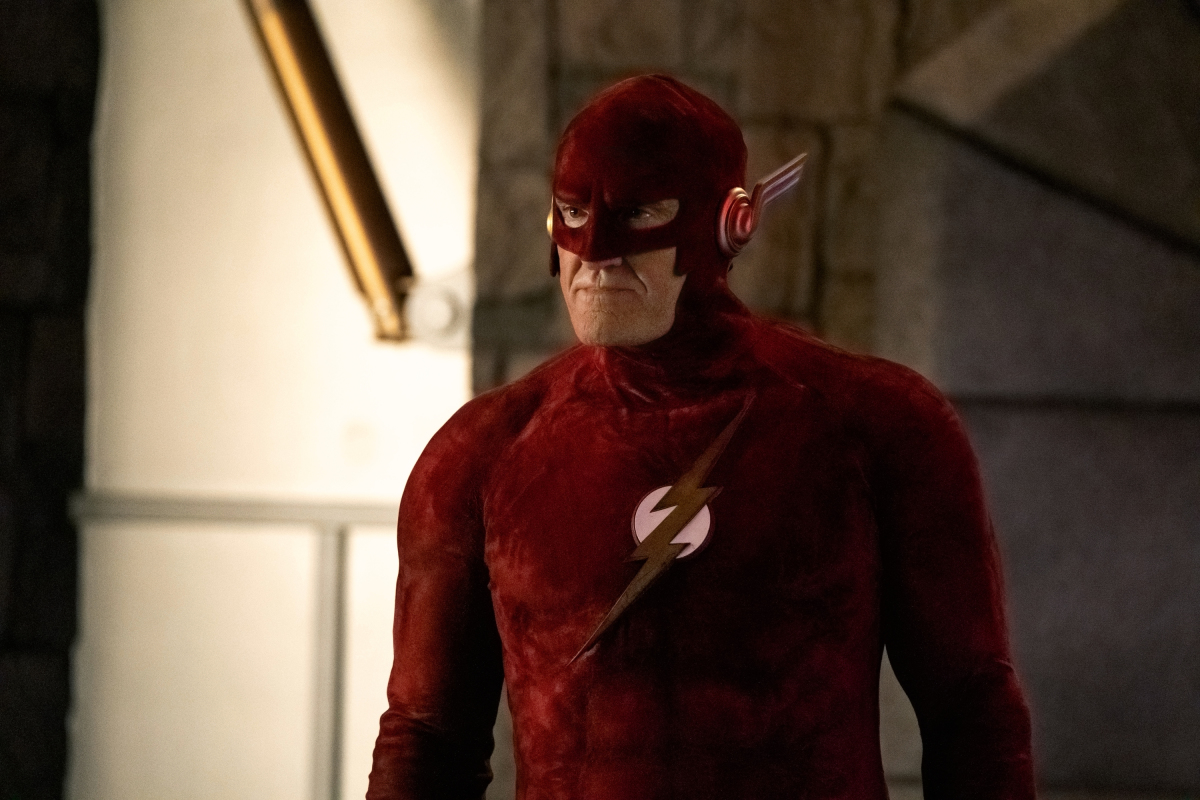 But then, the Flash of Earth 90 played by John Wesley Shipp, stepped in, stole Barry’s speed temporarily, and died to save everyone. It was a beautiful moment for the whole gang, not just because it allowed Barry to live but because it allowed Shipp to give his character from the original 90s Flash television series closure to a 30-year character arc.

It was a great moment that was slightly undercut by the fact that minutes later, Lyla as Harbinger showed up under the control of the Anti-Monitor and destroyed everything and everyone except the seven paragons…meaning everyone we love is dead or doomed. Whoops.

The Legends and Lex Luthor may be key to everything?

The final minutes of hour three of Crisis were as shocking as Infinity War and the body count was even higher, and it looks as though the key to saving the multiverse, in some form, might mirror Marvel as well with time travel playing an important role.

The paragons – Kate (Courage), Kara (Hope), Sara (Destiny), J’Onn (Honor), Barry (Love), Ryan Choi (Humanity) and Earth 96 Superman (Truth) are are supposed to be the key to saving everything. before they were killed, Pariah sent them to The Vanishing Point, a place outside of space and time that was central to Legends of Tomorrow season one.

That’s a surprise because we generally don’t talk about Legends‘ rocky first season, so it’s interesting we’re revisiting it. But it does make sense as a safe haven. But even more shocking was that Lex Luthor (Jon Cryer) rewrote the book of Destiny to make himself the paragon of Truth, or at least a paragon, and replace Kingdom Come Superman. That is wild and it’s going to make the final battle even crazier.

Where will that battle happen? Probably at the beginning of time, if the comics are to be our guide. Our Paragons will take on the anti-monitor with Spectre by their side, but even that might be a hard battle. If the final hour is a Legends heavy story, maybe they’ll need an extra God on their side…perhaps a blue one?

We will find out on the conclusion of Crisis on Infinite Earths on Tuesday, January 14th at 8:00 on The CW.