US Supreme Court Stands Up for Women in Two Landmark Decisions 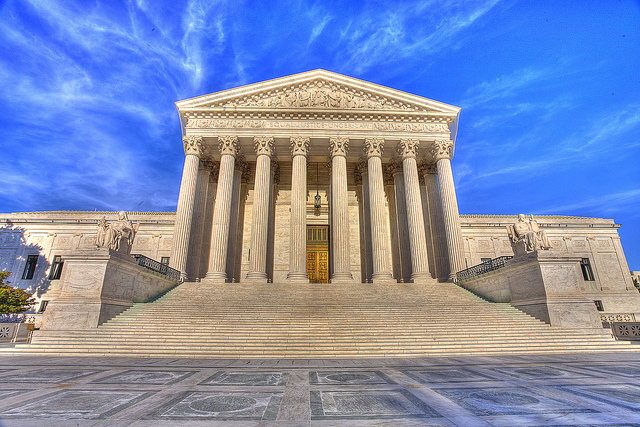 Today is the “last day of school” for the US Supreme Court before they go on summer break, and they had three big cases that still needed rulings before heading to the beach to work on their tans, two of which would impact women’s lives and health a great deal. Thankfully, the Supreme Court has ensured that the United States is a safer, healthier place for women today in two decisions that are a pretty big deal.

According to the SCOTUS Blog, the case of Whole Woman’s Health v. Hellerstedt concerned two provisions that regulated abortions according to Texas state law. Provisions that were supposedly about “protecting women,” but in reality (as is usually the case with such laws) sought to hinder their access to safe and legal abortions. The first provision “require[d] abortion clinics to have facilities that are comparable to outpatient surgical centers,” and the other “requires doctors who perform abortions to have privileges to admit patients to a local hospital.” Both of these provisions would’ve been financially disastrous for abortion clinics already in existence, including Whole Woman’s Health, who would have to find new doctors and/or make arbitrary changes to their facilities (after all, what does “comparable” mean?), the cost of which would force most to shut down.

Thankfully, the Supreme Court struck down those laws in a 5-3 vote in favor of the clinics. According to the Associated Press, “Justice Stephen Breyer’s majority opinion for the court held that the regulations are medically unnecessary and unconstitutionally limit a woman’s right to an abortion.” Justice Breyer was joined by Justices Anthony Kennedy, Ruth Bader Ginsberg, Sonia Sotomayor, and Elena Kagan, while Chief Justice John Roberts and Justices Samuel Alito and Clarence Thomas dissented. Of course.

Meanwhile, in the case of Voisine v. United States, two men who had previously pleaded guilty to misdemeanor assaults on their respective domestic partners were “charged with violating a federal law that prohibits the possession of firearms and ammunition by individuals who have previously been convicted of a misdemeanor crime of domestic violence.” Their reasoning? They argued that their misdemeanor convictions don’t count under the federal law, because those “state-law provisions can be violated by conduct that is merely reckless, rather than intentional”

How one “recklessly, but not intentionally” assaults their domestic partner is anybody’s guess, but the Supreme Court wasn’t buying the “heat of the moment” argument. They’re upholding the reach of that federal gun law preventing those who commit domestic violence from owning firearms. Which is just as well since, if your go-to response in the “heat of the moment” is beating someone? You’re probably not someone who should have access to more complicated weapons.

Okay, Justices of the Supreme Court — get out there and have a great summer vacation. You’ve earned it! (But is there a way to make the judges who dissented in these cases go to summer school?)

(via The Daily Beast and Associated Press, image via Envios/Flickr)