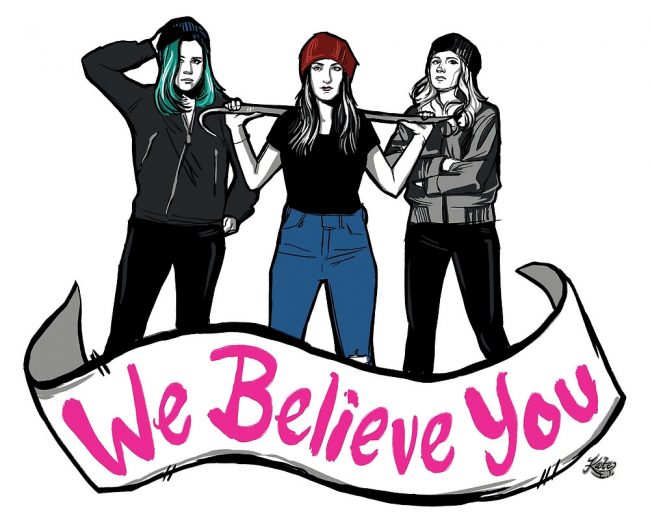 Just because Sweet/Vicious was cancelled by MTV doesn’t mean its fans aren’t still making a difference. One fan in particular, Brittany Dailey, has taken her Sweet/Vicious fan art and translated it into real, concrete support for sexual assault survivors.

Earlier this month at the ATX Television Festival, Dailey became more well known thanks to Sweet/Vicious creator Jennifer Kaytin Robinson picking her out at the show’s panel and asking her to stand, because Dailey’s shirt caught her attention. The shirt featured the above artwork, and thanks to the attention at the panel, people reached out to Dailey wondering if there was any way she was making the art available.

Well, she is! And for a great cause:

For the survivors. All profit will be donated to @RAINN01. We believe you. #SaveSweetVicious https://t.co/EkEggeY2Sg pic.twitter.com/i6M0MKRnVt

In an interview with Birth.Movies.Death, Dailey talked about the fact that the artwork was not only a way for her to honor this important show, but to honor a friend who had recently come to her and told her that she’d been assaulted.

Says Dailey, “I conceived of the art in light of the show getting cancelled. But more importantly, about a month ago, my friend shared with me that she was assaulted, just days before. I made the art as a testament to the show and the survivors, and how important it is for them to know that they are valid and believed. It really was an outlet for me in order to process this epidemic and support my friend. I didn’t expect it to be received as well as it did. I honestly couldn’t ignore the importance that it could have for other survivors, which is why I decided to make it available, as well as taking any profit and donating it to RAINN.”

If you’d like to help RAINN help survivors nationwide, while also spreading the important message that we should believe survivors, you can buy Dailey’s artwork as stickers or greeting cards over at Redbubble.