Researchers Are Using Super-Lasers To Create Supernovas (In A Lab, Don’t Worry About It)

All in the name of solving a space mystery! 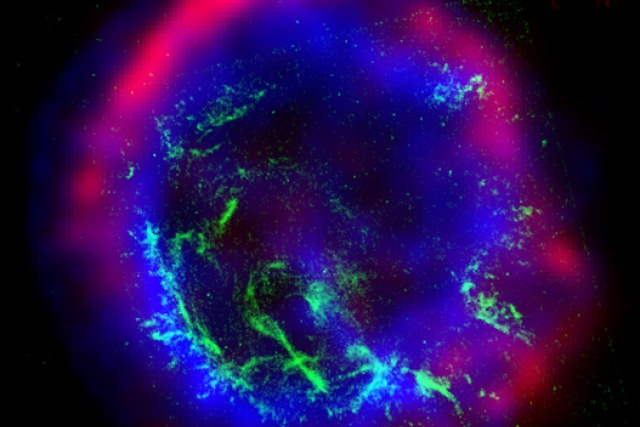 Science has long wondered why the aftermath of supernovas – giant star explosions that release huge bursts of radiation – look the way they do. Naturally, the only way to solve this problem was to actually explode a star – except with lasers, which makes it somehow even cooler.

Researchers at the University of Oxford wanted to find out why, after stars go supernova, they sometimes leave behind remnants of dust and gas that often make no sense. Instead of spreading uniformly through space, as you might think they would, supernovas often leave behind weird, twisty shaped leftovers.

To make a lab supernova, the scientists took lasers sixty-thousand-billion (actually) times more powerful than a standard laser pointer, and focused the beams on a thin carbon rod in a gas-filled chamber. Also in the chamber was a plastic grid, used to block heat, simulating some of the dust and gas a real supernova would experience when expanding through space. When the super-lasers heated the carbon rod to over 1.8 million degrees Fahrenheit, the rod exploded through the chamber, re-creating a tiny star explosion.

The experiment demonstrated that it’s the inclusion of the “plastic grid” (or, the gas, dust, and magnetic fields surrounding the star) that make the supernova go all turbulent and irregular. They also think their research could provide some insight into how magnetic fields were first created, since the blast was shown to increase the strength of existing magnetic fields.