Scientists Think They’ve Found Evidence Of Theia, The Planet That Collided With Us And Made Our Moon

I think I read a Sailor Moon fanfiction about this once. 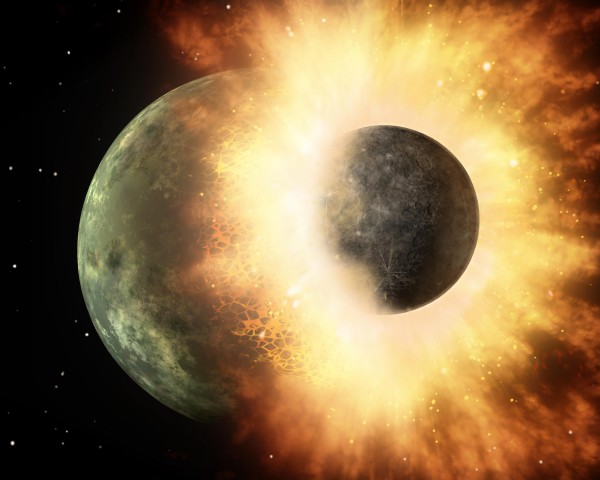 Most astronomy nerds know the story behind the Giant Impact Hypothesis: billions of years ago, a Mars-sized planet supposedly collided with Earth, and the fragments from the crash coalesced to form the Moon. Now new research on lunar samples from the Apollo missions bolster that hypothesis. Hooray for science maybe being right!

The study, which was published in Science, scanned samples from Apollo 11, 12 and 16 missions with powerful electron microscopes that weren’t available to scientists when the rocks were first obtained. Looking at the data on triple oxygen isotopes from both Earth rocks and Moon rocks revealed a 12 parts per million difference in oxygen-17 between the two. This supports the idea that a body with a different composition — Theia, which was named after the mother of the Moon goddess Selene — was instrumental in separating the Earth from the Moon.

“The differences are small and difficult to detect, but they are there,” said lead researcher Daniel Herwartz from the University of Cologne. “This means two things; firstly we can now be reasonably sure that the giant collision took place. Secondly, it gives us an idea of the geochemistry of Theia.”

Herwatz, of course, doesn’t bring another benefit to this research that some of us care the most about: all the Theia-inspired sci-fi stories that we can look forward to now that that the long-lost planet is getting so much more attention. Doctor Who episode? Yes please. A terrible SyFy B-movie about us colliding with a Mars-sized planet of sharks? Gimme. Sailor Moon fanfiction, complete with Sailor Theia? I am already drawing her up in the Dolldivine Senshi Maker now. The possibilities are endless.

(via Universe Today, image via NASA/JPL-Caltech)