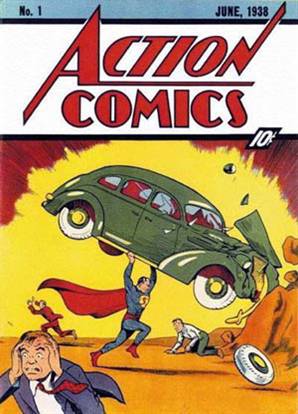 A copy of Action Comics #1, the first comic to feature Superman, has sold in an auction on ComicConnect.com for $1 million.

It’s one of about 100 copies known to exist, and got more than 3 times as much as the last record-breaking copy of Action Comics #1, which sold for $317,000, because it was in better condition.AP:

The issue sold Monday morning is a 1938 edition of Action Comics No. 1, widely considered the Holy Grail of comic books. It features Superman lifting a car on its cover and originally cost 10 cents.

In related news, the comic book adaptation of Superman IV: the Quest for Peace is currently selling on eBay for a decidedly non-record shattering $1.00. Yes, that includes “Buy it Now.”