Allow Us to Explain: Superman: Earth One 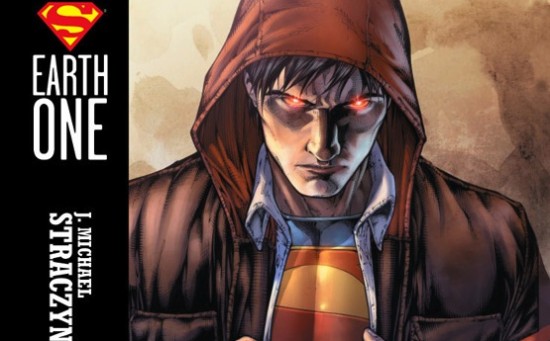 You may be seeing a lot of press about a new version of Superman these days, from a graphic novel called Superman: Earth One that comes out today.  People have been throwing around adjectives with no regard for the safety of those around them, words like “cinematic,” or “staggering,” or “hipster.” You may be wondering how this new version of the Man of Steel will affect you and your loved ones.

Is he really a hipster?  Does he still stand for Truth, Justice, and the American Way?  Is he going to lobotomize me with his laser eyesohgod.

Allow us to explain.

Earth One has meant a number of different things over the years, and I won’t explain all of them because such an explanation would, to be frank, make about as much sense as a mildly sedated kitten filming an in depth documentary about 17th century Russian farming techniques underwater.

So here’s what you need to know: Earth One is an alternate version of the main DC universe that writers and artists are going to use as a setting for a shared continuity of modern revamps of DC characters.  So far, Superman: Earth One and an upcoming Batman: Earth One are in the works.

So, to answer one question: no, there are no plans to incorporate this new origin story into the main DC continuity.  However, the new interpretation is likely motivated at least partly by the end of Smallville, and the anticipation of a new cinematic revamp of the Man of Steel in 2012.  Young, modern, unmarried, untested Supermans are kind of all the rage outside of the pages of comic books these days.

Is He a Hipster?

Uh, not as far as we can tell, no.  Comic Book Resources has eleven preview pages and a cover to look at, and there’s really no substantial changes to the costume.  A couple of seams, maybe.  And as for the cover, no self respecting hipster would be caught dead in an un-logoed zip-up hoodie or Wolverine’s jacket.

The preview doesn’t give us any indication of how Clark Kent really looks in typical mild mannered mode.  Once he puts those glasses on… then maybe we’ll have something to worry about.

Isn’t A Revamp a Big Deal?

Well … Here’s the thing about Superman.  The original Superman, the one that Jerry Siegel and Joe Shuster pitched to National Publications, grew up in an orphanage and couldn’t fly, and Krypton didn’t even have a name.  Ma and Pa Kent, a Kansas childhood, and a healthy alien origin are all things that were added on later, usually because someone was adapting Superman for a different medium (like a daily newspaper strip, a radio serial, or a series of cartoons), gave him a few other good details, and the comics incorporated them. The bright optimistic tone of Superman, however is something that writers have never successfully gotten away from, and I don’t mean that as a defect.  Superman is a very basic kind of hero trope, and he is useful for telling a very basic, very old kind of story.

Contrast with Batman, for example, whose definitive origin story was laid out six issues after his first appearance, and hasn’t changed since.  The tone of Batman comics, however, has veered wildly over seventy years from gritty social commentary to the very definition of camp, and then back to social commentary again.  But Batman has always been a rich guy in a big house with a lot of issues and a lot of gadgets.

So, yes, the occasional Superman origin revamp is necessary to keep the big guy relevant to modern sensibilities.  We’re not always prepared or interested in stories about a guy who is just so unwaveringly brave, and good, and, well… nice in that helping cats out of trees sort of way.  Sometimes we need to have it presented to us in a new way, in order to remember what we like about it.

Here’s hoping this one’s a keeper.