And it's for a good cause. 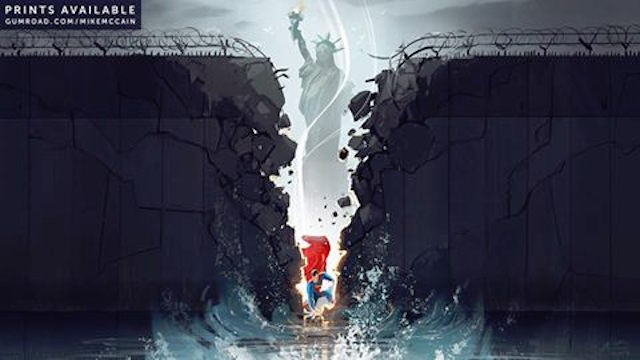 Game industry art director Mike McCain has designed a gorgeous print of Superman (an immigrant himself) absolutely decimating a barbed wire-topped wall. It can be yours, with all the proceeds going to the ACLU.

On his Gumroad page, McCain says that 100% proceeds from the sale of his artwork are destined for the ACLU “for as long as the current immigration ban exists.” Per his Twitter, more than $5k has been raised from the Superman print alone. McCain has worked on video games like BattleTech and Shadowrun: Dragonfall, and is currently at Harebrained Schemes studio.

The Superman piece, which is titled “…And The American Way,” is available for $50 as a framed print and $20 frame-free. On a day when President “Build The Wall” Trump signed a new executive order arbitrarily curtailing immigration, this image has never felt more relevant. The stunningly evocative sight of Superman destroying a dark wall to reveal the light of the Statue of Liberty behind isn’t something I’m going to forget anytime soon. Especially since I must have one for my living room.