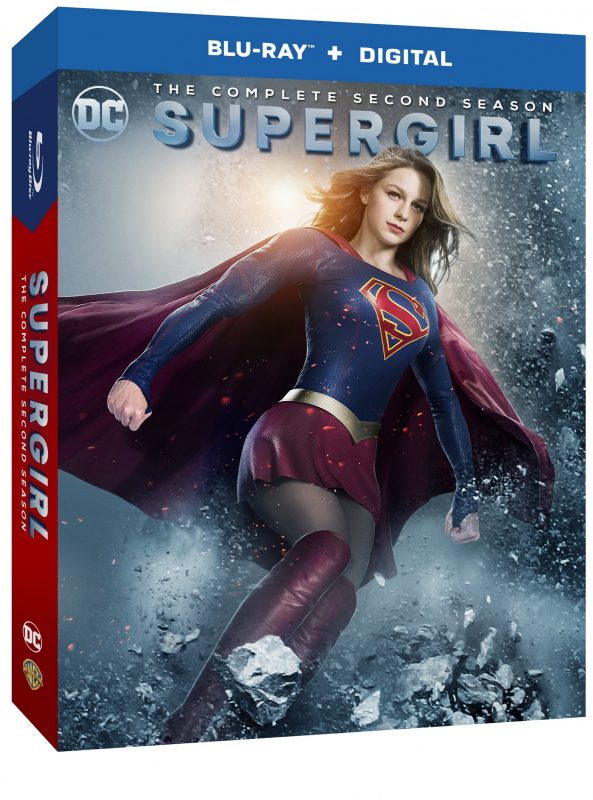 You may have noticed that I’m a huge fan of The CW’s Supergirl. So, trust me when I tell you that, as a fan, Supergirl Season 2 on Blu-ray, available now, is a totally worthwhile investment.*

For a super-quick recap of what went down this season, here’s the official synopsis from Warner Bros. Home Entertainment:

“Having left the safety of being Cat Grant’s assistant at Catco Worldwide Media in order to figure out what she really wants to do, Kara Danvers (Melissa Benoist) continues to work with Hank Henshaw aka Martian Manhunter (David Harewood) and her adoptive sister Alex (Chyler Leigh) at the DEO as Supergirl – protecting the citizens of National City and searching for her missing father Jeremiah (Dean Cain) and the secret research lab Cadmus. Along the way, she will team up with her Kryptonian cousin Kal El—aka Superman (Tyler Hoechlin)—to battle new DC Super-Villains both terrestrial and extraterrestrial, as she strives to balance her personal life with friends/allies James Olsen (Mehcad Brooks), Winn Schott (Jeremy Jordan) and more with her busy life as a new Super Hero in SUPERGIRL Season Two.”

Yes, all 22 episodes of Season 2 are finally available for home viewing on Blu-ray, Digital HD, and DVD. So, why should you spring for the Blu-ray? Well, the special features, of course! Here’s the run-down of what’s on the Blu-ray and DVD:

By far the most fun things on the Blu-ray are the “Supergirl Lives” commentary from and the bonus conversation between Supergirl EP Andrew Kreisberg and Kevin Smith, who directed two episodes of Supergirl in Season 2 (the other was “Distant Sun”), and will be returning in Season 3. Not only are these two basically besties (so the rapport and the conversation is good), but they each care so much about Supergirl as a character, as well as about telling the larger, IRL stories that matter.

Like Sanvers, for instance. Smith was overwhelmed when talking about Alex and Maggie’s relationship, and as his first episode of the show was also the first episode in which they were really a couple, he was nervous about taking it on, hoping to do it justice. However, he shouts out the immense talents of Chyler Leigh and Floriana Lima, whose acting chops and natural chemistry make that relationship work so well on-screen, for doing the “heavy lifting” for a guy who “directed a movie with a lesbian in it once in the nineties.” 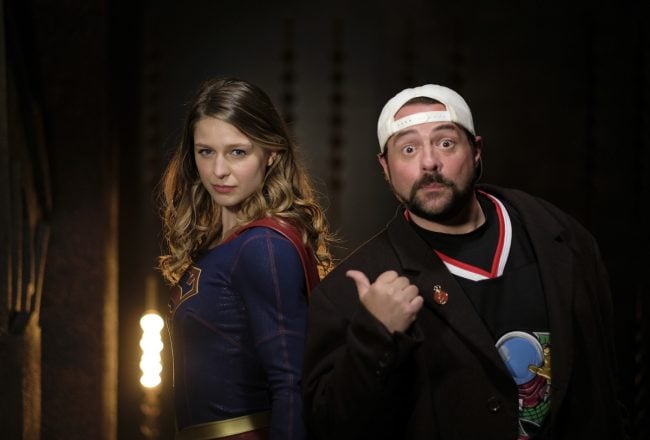 They also address the fact that, in Season 2, aliens became the thing that set Supergirl apart from the other CW DC shows, and became a way for the show to get political in addition to its feminism. Being able to use aliens as a metaphor for immigrants and refugees allowed the show’s creative team to speak to things viewers are struggling with in their real lives, and both Kreisberg and Smith love the fact that Supergirl can be a vehicle for that kind of conversation in addition to just being a fun superhero show.

Speaking of aliens, the featurette “Supergirl: Aliens Among Us” goes even deeper into that idea: aliens as metaphors for both the personal (Kara being an outsider in her family/on the planet, Alex feeling like an outsider because of her sexuality, J’onn being an alien who happens to look like a black man in America), and the political. The personal is political, on this show, as it is in life.

Also a lot of fun are the short “Did You Know?” videos, in which cast and creators reveal some Supergirl trivia that you might not have heard anywhere else. For example, what’s annoying about the way Kara eats ice cream? Or, what’s the deal with the baby that played Baby Superman? These questions, and more, are answered in a really fun way.

And for the geeks among us (which is basically all of us, right), you can check out an in-depth look at the alien fight club of the episode “Survivors,” as well as the Supergirl 2016 Comic-Con panel, in case you missed it.

The one drawback? There was a sticker on the outside packaging that advertised a gag reel, but there’s no gag reel (or deleted scenes for that matter) in the special features. Honestly, I don’t mind, as those features in particular are usually hit or miss (usually miss). But I’m giving you the heads-up in case you see that sticker on the packaging you receive. I confirmed with Warner Bros. Home Entertainment that those stickers are an error, but that what you see printed in the liner notes and on the box itself are correct.

As I said, Supergirl is available now on Blu-ray ($54.97 SRP), DVD ($49.99 SRP), and on Digital HD on platforms like Amazon Video, CinemaNow, iTunes, PlayStation, Vudu, and Xbox. Oh, and by the way, a Digital HD copy of the season is available with the Blu-ray, too!

We still have a little over a month before we get more Supergirl on The CW in the form of Season 3, so the Supergirl S2 Blu-ray could be a great way for you to tide yourself over until then! I definitely got jazzed as I enjoyed the special features, and it reminded me of why I fell in love with Kara Zor-El in the first place.

*Warner Bros. Home Entertainment provided me with a free copy of the Blu-ray I reviewed in this post. The opinions I share are my own.