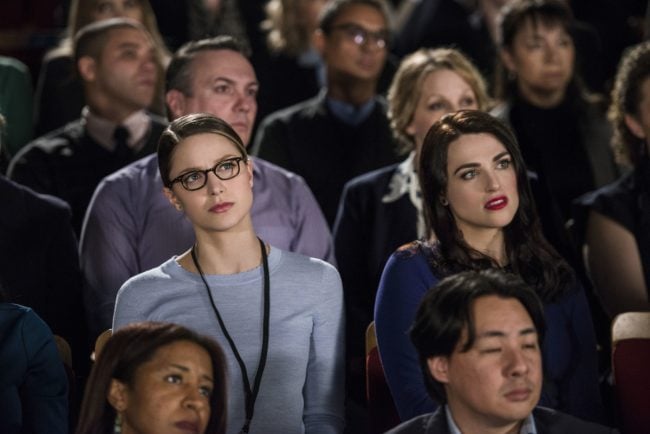 As you might have guessed, a lot of fans did not find Jordan’s joke funny.

This is was pretty gross. The cast wouldn’t have mocked Supercorp if Lena was a man.

was that really necessary? why bring up romantic supercorp for no reason just to shut it down?

Supercorp fandom where are we migrating next? Waynonna Earp? They have good rep and the cast is great 🙌🏻

wow i cant believe supergirl suddenly got cancelled what a shame

While Jordan thought he was just making a harmless joke, “debunking” the “Supercorp” relationship, he has a fundamental misunderstanding of why shipping is so important to LGBTQIA fans.

[ETA: For the unfamiliar, “shipping” is when fans imagine a relationship (often times romantic) between characters that may or may not have been overtly intended by their writers or creators.]

LGBTQ+ representation is severely lacking on television, and respectful, fully developed queer relationships even more so. So fans will sometimes root for and support the relationships they want to see onscreen. Just because it isn’t planned by the show’s creators, or official canon, that doesn’t make it less important to fans.

And the very last thing those fans need is to be laughed at by someone on the show.

For most of the history of TV, LGBTQ were either tragic figures or the butt of a joke. Something to be disposed of or mocked

That cuts wide and deep, and has settled into the bones of many fans. It’s not being overly sensitive. It’s the throbbing of that wound.

At a certain point, queer and trans fans said, enough. And that means calling it out when it happens.

It’s worth noting that in the full video of the interview, McGrath voices a much more open response to the Supercorp shippers. She says that while she and Melissa Benoist didn’t expect this reaction to their onscreen friendship, she sees it as totally valid. “The great thing about what we do is, like any art, anybody can read into it what they want and take from it, so you can see anything and take from it what you like. And that’s what’s great about this show. There are so many different ways to see everything. And if that’s what you see in it, you know, take it away. It’s art.”

Jordan, though, took to Instagram to address people’s displeasure with his comments. He apologizes, but insists that people are misinterpreting his intentions.

Again, Jordan seems to be misunderstanding what the problem was. His apology still reads as incredibly dismissive of the feelings of fans, ultimately boiling down to “you got it wrong.”

If someone from a marginalized group tells you what you did hurt them, you don’t get to decide that you didn’t because it wasn’t intentional

Obviously, he got the message that fans were still upset.

U guys. I love u. I was wrong and I’m sorry. You’re all amazing and valid. ❤️

It’s not clear if he actually understands why fans were hurting, and why shipping goes deeper than just fun, silly fantasy. But at least it sounds like he’s open to the idea that just because he doesn’t understand something, that doesn’t mean it’s not important and worthy of his respect.