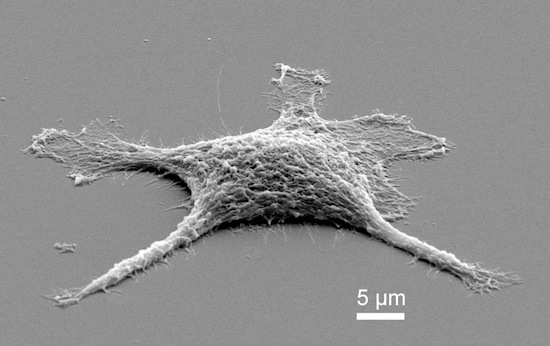 We’re always at work making humans better, faster, and stronger, but what about individual cells? Well, we can make them stronger, too. The problem is, we… kind of have to kill them first. Once we’ve done that, though, what’s left behind is a stronger, mineral model of the old cell’s structure — right down to its internal organs — that could be the beginning of a new breed of high endurance nanomaterials. While it retains the appearance of the old cell, though, it’s no longer alive, leading researchers to refer to the results as ‘zombie’ cells.

Thought the tech is complex, the principle behind it is as simple, akin to nothing so much as a resin cast. You remember when Han got dipped in carbonite? Same basic idea applies, except instead of carbonite, the team coated their test cells — along with organelles inside the cells like mitochondria — in a silica mixture. Then, they raised the temperature, around the silica coated cell. That increase in temperature burned away the proteins that made up the cell, but left the silica ‘skin’ intact as a model of the cell. And not just any model — a super-strong model that can endure higher temperatures and pressures than its organic forebear.

This “baptism in fire” leaves behind a stronger model that could then be put to use in nanoscale engineering and other projects that require strong, carefully crafted parts too small to be seen by the naked eye. Crafting those parts from scratch is difficult, time consuming work, and this latest round of work seeks to speed up the process by introducing a sort of mass production element to working with nanomaterials. Instead of building every new part they need, nanotech researchers could simply seek out a similar part that is already functioning in a cell, make a silica cast of it, and then reproduce it and plug it in to new cells. Henry Ford would be so proud.

Right now, though, the technique is still in its earliest phase, so its immediate uses center around imaging of cellular structures. It could also be used to preserve cells for future study without running the risks that go along with freezing them. So we take it back — this process is actually more impressive than carbonite. Which is, of course, really saying something.

CellsnanotechPNASProceedings of the National Academy of Sciences