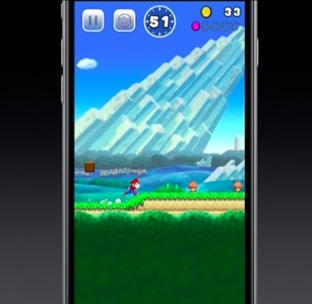 Apple’s iPhone event is underway, but before announcing the iPhone 7 (on purpose, anyway), they had Shigeru Miyamoto stop by to announce Nintendo’s first real mobile game, Super Mario Run, coming first to iOS.

The game is actually a little Flappy Bird-esque—though not nearly as difficult or frustrating—which is amusing, as Mario automatically runs left-to-right across the screen, while his jumping is controlled with a single tap by the player. Taps of varying length result in different height jumps, of course, to avoid obstacles and complete courses. The game will also feature a new, head-to-head battle mode for multiplayer.

The game won’t be “free to play” like Miitomo and Niantic’s Pokémon GO, and Miyamoto explained that was because they didn’t want players constantly worrying about paying to continue to progress in the game. Instead, it will have an as-yet-unannounced set price. There was no exact release date announced, either, but it will arrive on iOS in time for the 2016 holidays. (Nintendo of America’s Twitter account says December 2016.)