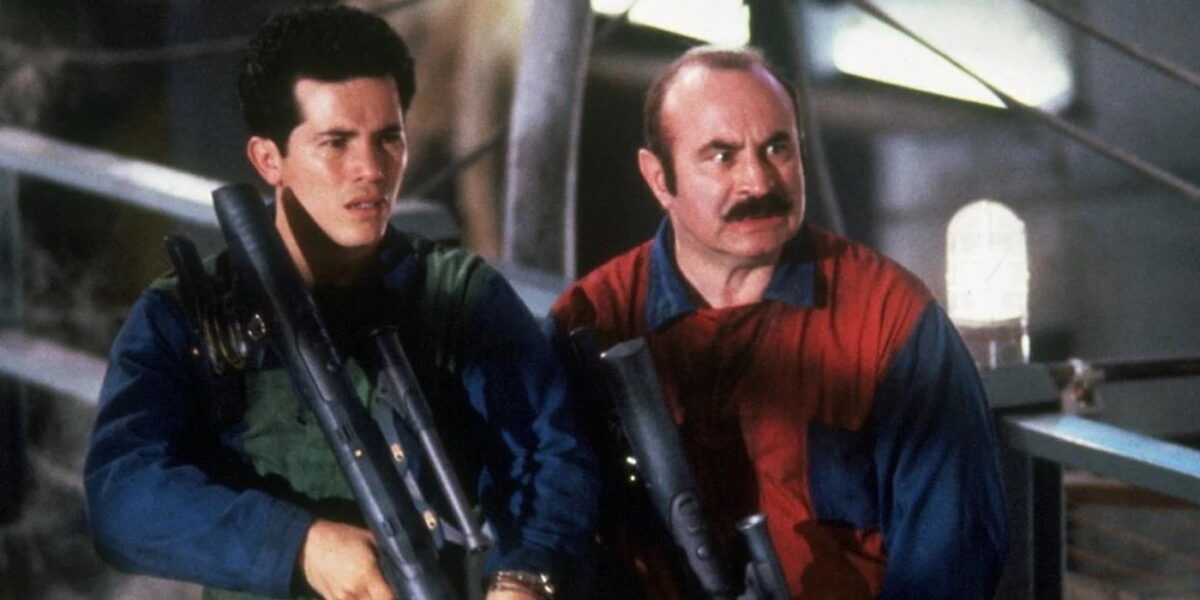 There comes a time in every Fandom Editor’s life when you see a geeky news story and go, “Wow, fandom is TOO powerful.”

There also comes a time in every Fandom Editor’s life when you realize that some folks out there may not have been alive back when the live-action theatrical release of Super Mario Bros. hit the scene in 1993 mere weeks before another dinosaur-themed movie: Jurassic Park.

Went up against this:

As a gamer child of the 90s, though, I was actually excited at the idea of video games being on the big screen, but even I could tell that something was, um, off about this somewhat gritty(?!) take on Super Mario Bros.

Not even my John Leguizamo is cute girl crush could save that film.

In 1993, there were quite a few Mario adventures to pull from (the dinosaurs are clearly because of Super Mario World) so it’s not like one of those cases where there isn’t much content for the video game so you gotta come up with your own story.

Even if that was the case, I’m not sure how “guy who can dress like a frog to swim faster” and “this place is called Chocolate Island” leads to this post-apocalyptic fungus-scape backed to The Power by Snap!

Let me be real with you. I did NOT expect to see this article today from Eurogamer, but it turns out, the Super Mario Bros. movie is the fungus that keeps on growing.

Fans of the legendary Super Mario Bros. movie have restored a more adult version of the film, with 20 minutes of deleted scenes.

The cut footage was found back in 2019 via an old VHS tape, but was in poor quality. Since then, a group has worked on restoring the long-lost version, which is now available to watch in full via the Internet Archive.

As officially released, Super Mario Bros. was 104 minutes. This new version – dubbed the Morton Jankel Cut in honour of its husband and wife director team – runs 125 minutes, with most scenes extended.

AVAILABLE TO WATCH IN FULL?!

Fandom. Is. Too. Powerful.

See, I thought I’d discovered it all with this little movie that couldn’t. It’s already head-scratching enough that this kind of glorious disaster of a Super Mario Bros. movie even exists, but the stories about the behind-the-scenes production are SO bonkers that it almost warrants its own movie! From actors being drunk on set just to make it through production, to horror stories about the directors, everything about this movie is cursed.

Just look at these quotes from actors who were part of the movie:

“The worst thing I ever did? Super Mario Brothers. It was a fuckin’ nightmare. The whole experience was a nightmare. It had a husband-and-wife team directing, whose arrogance had been mistaken for talent. After so many weeks their own agent told them to get off the set! Fuckin’ nightmare.” – Bob Hoskins interview via The Guardian.

“It was a nightmare, very honestly, that movie. It was a husband-and-wife directing team who were both control freaks and wouldn’t talk before they made decisions. Anyway, I was supposed to go down there for five weeks, and I was there for 17. It was so over budget. But I bought a couple buildings down there in Wilmington, NC, and I started painting. I made an art studio out of one.” – Dennis Hopper interview via AV Club.

You can actually get an entire breakdown via this Gaming Historian video. It’s not at all what I expected to learn from a movie based on a place called The Mushroom Kingdom… or maybe it is, I dunno.

The tape was very poor quality (much like the movie, har har), but thanks to director/editor/artist Garrett Gilchrist, the footage has been restored.

You can now watch the ENTIRE extended cut thanks to Gilchrist’s efforts, and if you’re into director commentary, you can check out this video where Gilchrist breaks down what was done with the new scenes.

Now those scenes have been included in a fully watchable version of the film.

Honestly? It’s kinda fascinating, and commendable, the amount of effort that was put into restoring this lost footage. Does it add more context to the film? Um, it adds… something to the film, I suppose? There’s more tension between our plumber brothers and the rival plumber group, more footage of the nightclub scene, some political jokes, and more squishy, slimy deaths.

Truly, this is the definitive way to watch the Super Mario Bros. movie. What a time to be alive my friends.