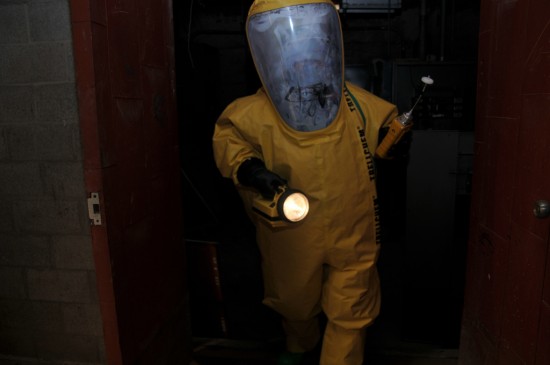 Though there have been only some 500 reported human cases of the avian flu H5N1, it is often regarded as one of the most dangerous viruses in the world. Apparently capable of killing 59% of infected people, the virus has been limited mostly by its inability to move easily from human to human. At least that was the case before virologist Ron Fouchier of the Erasmus Medical Centre modified the virus to be extremely contagious. Now, he’s facing harsh criticism over creating the virus in the first place, and whether or not his work should be published.

Fouchier originally set about attempting to better understand H5N1, which is a top priority for experts on pandemics. Though most of us in the developed world scoff at the idea of a flu being deadly, so-called “bird flus” have worried scientists for years because of their virulence.

In his research, Fouchier used ferrets which have respiratory responses to viruses like the flu that are similar to humans. His research team infected the ferrets and then trasnferred the infection from ferret to ferret, hoping to make the virus more adaptable. The virus naturally occurs in birds, but its ability to transmit to other animals has remained limited. However, in Fouchier’s work, the virus became airborne — meaning that healthy ferrets in the experiment could be infected simply by being near a sick ferret.

Analyzing the new strain of the virus, Fouchier found that it only took five mutations to make H5N1 extremely contagious.

Fouchier turned several heads after presenting his findings at the September ESWI Influenza conference in Malta, and is now turning several more with news that he wishes to have his work published in peer-reviewed journals. The concern is not so much that Fouchier created a dangerous virus, but that by sharing the information in a journal report, he would essentially be publishing a blueprint for a deadly flu pandemic.

To give some sense of the gravity of Fouchier’s research, chairman of U.S National Science Advisory Board for Biosecurity (NSABB) Paul Keim is quoted as referring to the newly mutated virus thusly:

I can’t think of another pathogenic organism that is as scary as this one. I don’t think anthrax is scary at all compared to this.

With fears of bio-terrorism on the mind, Fouchier is now facing criticism not only for wishing to make his research public, but for having performed the research at all in the first place. While other medical professionals have maintained that Fouchier’s research could be useful in preparing for a possible avian flu epidemic, his research places organizations like the NSABB in a tight position. The ability to freely share and publish research is a cornerstone of modern science, and even well-intended efforts to limit that freedom could have severe consequences — whether it’s the loss of potentially valuable knowledge or the future misapplication of a modern precendent.

That said, the NSABB does not actually have the authority to suppress the research, but the Daily Mail notes that it can put pressure on journals to not accept the study for publication. Some members of the scientific and medical communities have meanwhile sought a middle path, where some potentially dangerous aspects of the study are withheld, and the more valuable portions made public.

What will happen to Fouchier’s research is up in the air, and partly up to him to decide what to do from here. However, it may make little difference as a similar study carried out in Japan, reportedly with similar results to the Fouchier’s study, means that one way or another, this information is likely to get out.