Just this once, look directly at the Sun. 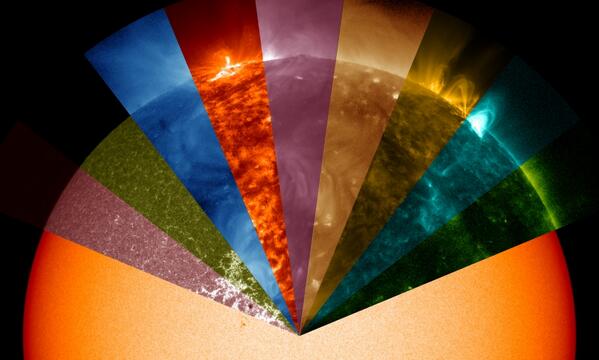 This video shows the Sun opening its mouth like Pac-Man. Instead of eating ghosts, it shows you what its surface looks like at different wavelengths of light, and it looks gorgeous. NASA is calling it the “Jewel Box Sun” and throwing around the word “rainbow” a lot, but we’ll stick with our Pac-Man analogy, thank you very much.

Yellow light of 5800 Angstroms, for example, generally emanates from material of about 10,000 degrees F (5700 degrees C), which represents the surface of the sun. Extreme ultraviolet light of 94 Angstroms, which is typically colorized in green in SDO images, comes from atoms that are about 11 million degrees F (6,300,000 degrees C) and is a good wavelength for looking at solar flares, which can reach such high temperatures. By examining pictures of the sun in a variety of wavelengths – as is done not only by SDO, but also by NASA’s Interface Region Imaging Spectrograph, NASA’s Solar Terrestrial Relations Observatory and the European Space Agency/NASA Solar and Heliospheric Observatory — scientists can track how particles and heat move through the sun’s atmosphere.

Honestly? We’re just happy to look at the Sun be beautiful for a few minutes.