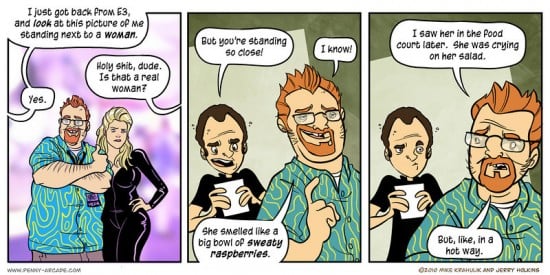 The LA Times is reporting that members of the internet community Suicide Girls will be banned from having a booth at this year’s San Diego Comic Con for the first time in four years, and, though the information is murky on both sides, we’re inclined to agree with their assessment.

Comic-Con International claims that it saw evidence that adult DVDs were being sold to underage con-goers, while Suicide Girls maintains that they educate all of their con workers about proper procedure, and “instruct all girls who are present at conventions to check IDs for anyone who looks under 30. We have a large sign up at our booths that says ‘You must be 18+ with ID to purchase.'”

The evidence cited by CCI is that:

a member of Comic-Con International’s Board of Directors purchased an adults-only SuicideGirls DVD at Wondercon 2010 without being ID’d and that the same man also saw, first hand, an underage person purchase a DVD from SuicideGirls without an ID check.

We’d be interested to know how the board member knew the purchaser was a minor, if there was no ID check.  We’d also hazard a guess that the board member himself could probably not be mistaken for someone under 30, thus explaining why nobody carded him.  I’m so sorry those hot girls didn’t think you were a young stud, sir.

Okay, so this is legitimate news about the biggest event organizer in the geek world preventing a smaller but well established retailer from getting a booth for very flimsy reasons.  As Bleeding Cool points out:

The Con itself says that the Girls simply didn’t have a booth this year, that there is a long waiting list to get one and that no one has been banned.

However, much booth entitlement is “inherited”, passed down from exhibitor year to year, and the Suicide Girls were definitely there last year.

Definitely something fishy going on there.  But why the snark?

Well, because San Diego Comic Con allows booth babes.  And if this ban is what it looks like (i.e., disproportionately punitive to the legitimacy of the evidence), it makes it look like CCI has some other kind of motive, like getting those not family friendly elements out of their event.

Which brings us back to booth babes.  Do I need to explain the difference between people voluntarily displaying themselves in a manner of their choosing to other adults, and businesses who hire women’s bodies to sell product in a public space?  Now, I’m not necessarily saying that either of those groups should be allowed to do their thing in front of an all-ages public, but I think I know which one I would rather have at my con.