Subway Sandwich Shop In Japan Grows Its Own Hydroponic Lettuce 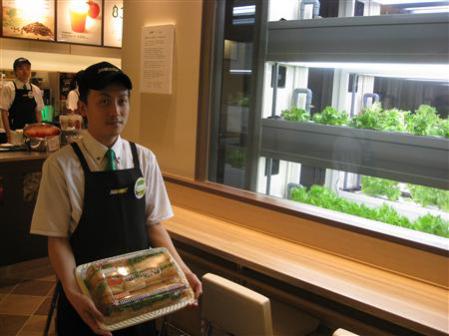 Subway Japan, what will you think of next? Already having the reputation of providing fast food that’s actually pretty healthy, Subway in Japan has decided to take things to the next organic level by growing their lettuce in the stores themselves, right before your eyes. Unfortunately, there doesn’t appear to be a lobster-like system where you can choose your own plant to be killed and served to you.

Well, so far it’s just one store. The Subway Japan in the Marunouchi Building will feature large aquarium-like displays where lettuce is being grown hydroponically without any of those pesky chemicals everyone says are bad. It opens July 13, and will be the first of many.

Now this isn’t a publicity stunt or anything, and it’s also definitely not a total makeover for the sandwich business. The homegrown lettuce will cost twice as much as it would otherwise, and there will only be enough grown in the store at any given time to supply about 5 percent of all sandwiches sold, meaning that if everyone comes into the store hoping for that hydroponic goodness, 95 percent of them could be sorely disappointed and the lettuce displays could look tragically barren.

Still, this shows that Subway Japan is concerned about the healthiness of its product and, thus, the well-being of its customers. Subway is also looking into other avenues to provide even fresher vegetables to its customers soon.