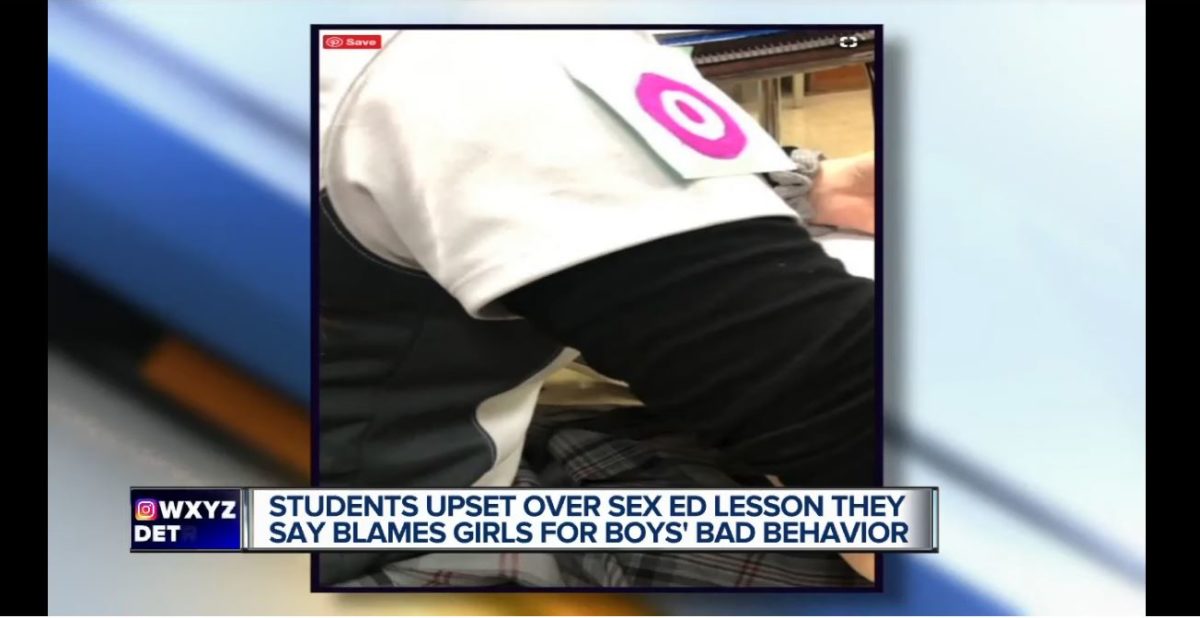 High school sex education in America: it’s woefully inadequate at best, and downright damaging and victim-blaming at its worst. One of the worst perpetrators of damaging Sex Ed are private religious high schools, like Dearborn Divine Child High School in Dearborn, Michigan. The Catholic school made headlines last year for making girls wear “modesty ponchos” if their prom dresses were too revealing, which they soon backed down from following public outcry.

Now, the school is back in the news thanks to a student-led protest in response to a lecture on rape and sexual harassment. The lesson, delivered by the school’s Campus Life Minister, was recorded by students in the class who were offended by the minister’s advice. According to these recordings, the minister blames the girls in class for the boys’ bad behavior, saying “Ladies, if you dress provocatively and leave absolutely nothing to the imagination, younger girls look and go, oh my gosh, she’s got plenty of boys around her … Those younger guys go, oh, that’s how you talk about women, that’s how you look at women as an object, something to be dissected.”

Ah yes, the classic “it’s your fault for dressing that way” defense. A sexist standby of sex education and victim-blaming that puts the onus of behavior entirely on the girl and never on the boy who is actually perpetrating the harassment and/or assault. This toxic mainstay of rape culture reinforces the idea that boys and men just can’t help themselves, and it’s up to us women to cover up and keep them from being tempted.

But it’s 2019, and the female students were quick to call out the sexist and demeaning lecture. Several students took to wearing paper target symbols on their clothing to signify that they were being targeted unfairly. The students also put up posters around the school that read “Instead of publicly shaming girls for dressing how they want, teach men not to over-sexualize women’s bodies,” followed by a quote from Matthew 5:28 reading, “But I say to you that everyone who looks at a woman with lustful intent has already committed adultery with her in his heart.”

In response, the girls who wore the targets were given detention, while the ones who put up posters were threatened with suspension. The school later denied these disciplinary actions. Parents of these students spoke out in support of their kids, but did so anonymously. One father said, “He was telling a woman, if you’re dressing a certain way, you’re asking for it,” following it up by saying “We teach our girls to be strong.”

It’s infuriating that schools like Divine Child are still endorsing this offensive line of thinking. But it is encouraging to see not only these students but also their fathers and parents standing up to take the school to task. Kudos to them for refusing to stay silent in the face of such sexist trash.