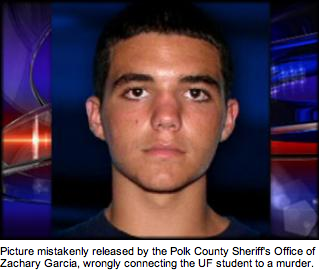 I can’t possibly improve upon Tampa Bay news station WTSP’s headline on this story, so I’m not even going to try: A University of Florida student and Publix employee named Zachary Garcia idly Googled himself only to discover that his photo had been circulated by the Polk County Sheriff’s Office in connection with a murder. But the suspect in the felony murder case in question was Zachery Garcia — that’s Zachery with an “e.”

Zachary Garcia, the one who’s not a murder suspect:

“Everybody makes mistakes,” Garcia added. “I work at Publix and I might get somebody’s sub (order) wrong. But for somebody to get (the photo of a suspect) wrong…it’s not a sandwich, it’s somebody’s life you’re playing with.”

And now as this story spreads, non-murder suspect Zachary Garcia is going to see his name pop up in all of these murder-related stories about how Googling his name used to erroneously cause his photo to turn up in connection with a murder case. D’oh!