Reid told Variety that it was "very intimidating." 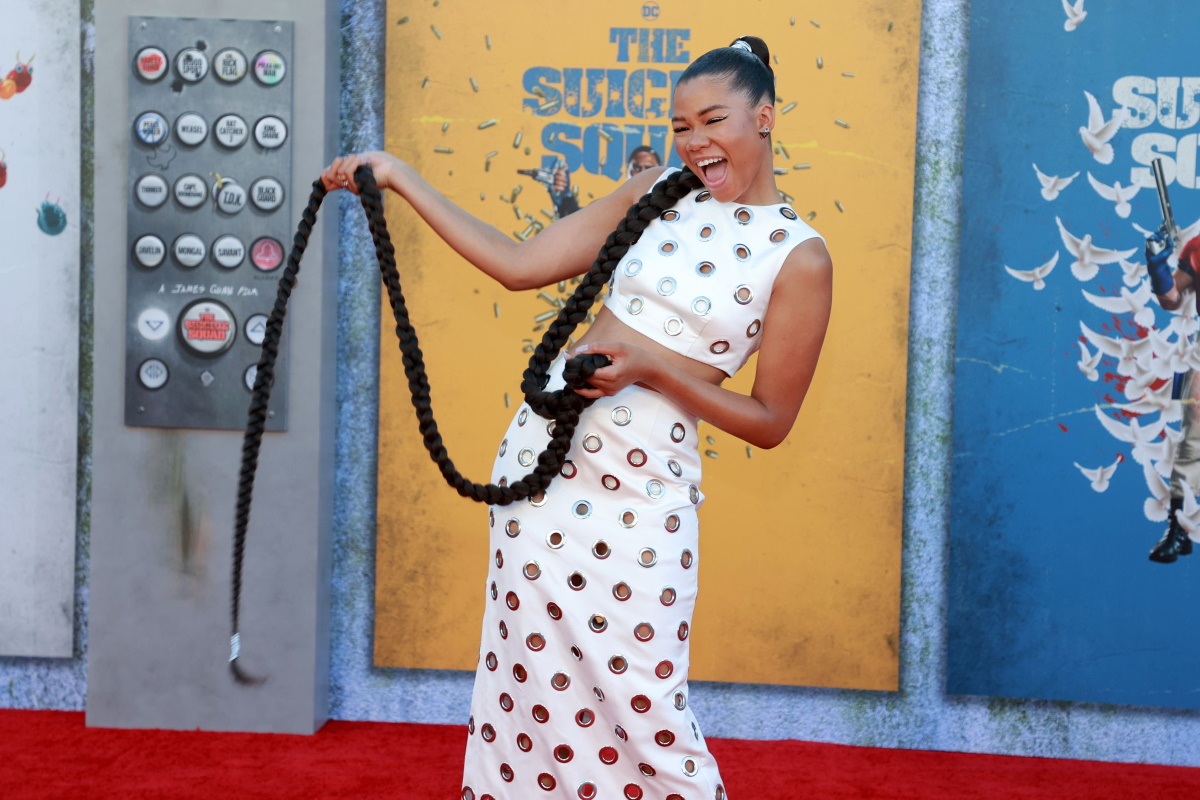 **Spoilers for The Suicide Squad.**

DC comics movie The Suicide Squad has our mismatched group of villains coming together to take on a daunting task, but at the end of the day, actress Storm Reid may have faced the biggest challenge yet. The 18-year-old actress plays Tyla, Bloodsport’s (Idris Elba’s) daughter, who ends up becoming his motivation in joining Task Force X.

It’s not exactly positive motivation, though. Tyla stole a style watch and is in a bit of trouble because of it. As Amanda Waller points out (after Bloodsport incorrectly states his daughter’s age), in the state of Louisiana, she could be tried as an adult and, oops, end up in the exact same prison that Bloodsport is in.

Before that, though, Bloodsport gets to have a chat with Tyla, which leads to an all-out screaming match where, at one point, Tyla screams F*CK YOU five times in a row to her dear old dad.

She also calls him a terrible father (because he only cares that she got caught, not that she stole something) and goes so far as to say that it’s embarrassing having him as a father.

In an interview with Variety, Reid talked about her part in the movie and how intimidating it was to curse out Idris Elba:

It is very intimidating, especially the way you put it, cursing out Idris Elba! It’s all part of the fun of acting, stepping into your character’s shoes and trying to embody a character, but also not neglect your raw emotion as a human being. They all made me feel comfortable. We had a day of going back and forth. Mr. James, he really made us go at it and had us do it a lot of different ways. I think the cut that made it into the movie is really darn good and I’m proud of it.

Mr. James refers to writer/director James Gunn. When asked if she always adds Mr. or Mrs. to the names of the directors she works with, Reid revealed that she does that with all of her elders period.

Yeah, it’s not just director. Anybody that is my elder, I say, “Yes, ma’am, yes, sir” and “Mr.” and “Mrs.” I’m from the South — I’m from Atlanta — and my mom wouldn’t have it any other way. If I don’t address someone correctly, I’d get in trouble. [Laughs] My mom gets on me. It’s just a thing of habit. It’s not forced. It was how I was raised and something I will continue to do. My mom still calls her elders, “Yes, ma’am. Yes, sir.” She addresses them as they should be addressed. It’s just a respect thing.

Honestly, as a Black woman, I feel this. While I didn’t grow up in the South, that “respect your elders” mentality runs deep in the Black community. I remember growing up and addressing adults who weren’t family members in similar ways. I also, to this day, don’t use profanity in front of my elders—even if my mother’s fairly lax about it if the situation calls for a solid f-bomb. (Let me tell you about 2020 and the numerous times she gave me a pass because circumstances were REAL bad.)

Still, it’s like this automatic switch in my head that removes curse words when I’m around my parents, elders in my family, and just older folks in general. And if I’m addressing someone who’s older than me who I don’t know personally, they get that “sir” or “ma’am” label. That’s just how it is.

So to have a scene where you’re not only cursing out THE Idris Elba (Mr. Idris is what Reid calls him later in the interview), but he’s playing your father, had to be quite the task to take on.

We’re taught pretty early on that you do not talk to your elders—especially your parents—that way, no matter how awful they’ve been to you. Of course, like Reid, you may have moments where you break that rule, but it’s not easy to do and can easily be shut down with a swift, “Who you think you talkin’ to?” I was in awe of Tyla not just because she curses her dad out. Hell, that’s not even the part that cuts deep for Bloodsport.

It’s because she flat out says that he’s bad at being a father.

Bloodsport might know that, but it’s a whole different thing to actually have your child say it to your face.

The Suicide Squad faced some truly fantastical odds, even so, the image of a young Black girl snapping at her father with a mix of language you dare not use in front of your parents AND calling out his awful parenting is one of the biggest whoa moments for me throughout the entire film.