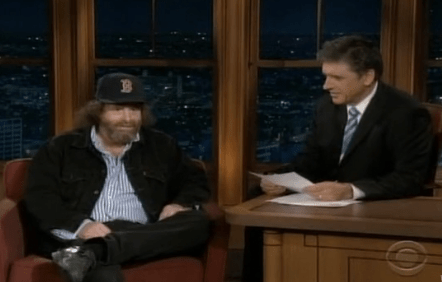 Steven Wright is the kind of cult comedian whose cult is particularly strong among the geeky crowd: Like Norm Macdonald or Mitch Hedberg (RIP), Wright’s routine is all about logic, structure, and (extremely deadpan) delivery rather than gross-out jokes or ‘attitude.’

He was in fine form on last night’s Late Late Show with his friend Craig Ferguson, in whom he seemed to bring out the best: They riffed on Ferguson’s robot-winning Twitter obsession (Wright: “Do you have to know everyone that you’re twittering with?” Ferguson: “No. It’s like sex in the 1970s.”), llamas (Wright: “I used to know two llamas in the early ’70s. They’re very arrogant. They think they’re cool because they don’t talk”), and internet favorite David Caruso.

It’s telling that when Wright simply said of Caruso, “he’s a good actor,” he got a big round of shocked laughter. They should send Steven Wright to (puts sunglasses on) the funny farm.

Video after the jump: