Steven Universe Recap: “When it Rains”

It's a terrible day for rain. 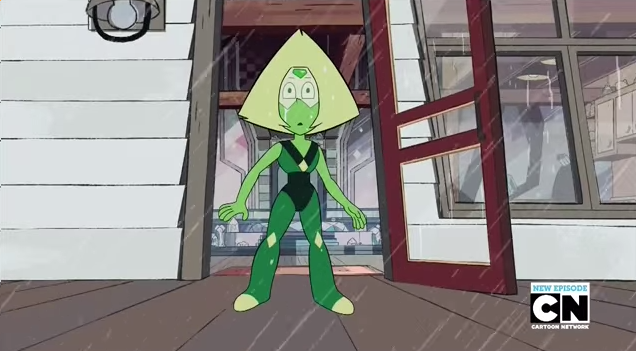 Maybe it’s me projecting, but these last two episodes have been practically bursting at the seams with excitement. Last week it was channeled into newly-little Peridot’s impotent rampage through the temple, and here it’s a madcap rush through all that exposition we’ve been waiting for. Arguably it’s a little bit too madcap—there are a lot of huge points about Gem society and the fusion experiments that go whizzing by, and it divides the episode’s pacing quite sharply between the measured build of the rainstorm and the rush of the kindergarten visit—but in all honesty I’d happily make the trade for the sake of the character beats that take the foreground.

Nothing encapsulates that so well as this episode’s relationship with rain. The title of the episode has almost nothing to do with the actual Cluster-related plot we get this episode (except possibly for the saying “when it rains, it pours,” and how that relates to the sudden deluge of revelations after weeks and weeks of nothing). The rain itself isn’t even a threat, as it was when Steven climbed onto the roof in “Future Vision.” Instead, it’s a perfect encapsulation of Steven and the show’s ethos: the unknown is frightening, and the surest way to erase that fear is to spread understanding.

And then there’s Peridot’s walk into the rain, AKA the moment when I upended the nearest object to scream give Lamar Abrams and Katie Mitroff an Emmy. The scene is less than a minute long, and yet it packs in enough layers about Peridot’s character to qualify as a party dip. First of all, we’ve just recently learned that Peridot “doesn’t know anything” without her screens. She’s a vessel for information, but she’s not learned to retain any of it—or, given her behavior last week, perhaps she’s learned it’s smarter to only know as much as you need to in a given situation in order to avoid seeming like an intellectual threat.

At the same time, she betrays herself as an analytical personality: her hand reaches out just enough to touch a single drop of rain and feel it between her fingers, not just to quantify it as a threat but to experience it (how long has it been since she’s willingly touched something without her enhancers on?). And she proceeds slowly even after that, animated to seem as if she’s passing through a barrier with a complimentary swell of triumphant music to underscore the feeling. And in a way, she is. She’s choosing to trust Steven in a situation where it is completely optional to do so. There will be no Crystal Gem threats if she doesn’t go outside, no bubbling. She’s doing something because he’s asked her, and because she’s curious, and because she truly seems to value the knowledge she gains from this new experience. The barrier of the screen door is a literal breakthrough, the rain a popular bit of visual symbolism for a cleansing or rebirth.

And it’s no small matter that she is clearly, quietly crying (if it’s rain, it’s too deliberately placed an shaded not to at least evoke the imagery of tears), while Shelby Rabara imbues the word “cool” with a singular reverence. Peridot is on the other side of something now, and it’s Steven who’s helped her get there. I’d lay down money that Peridot’s declaration of “I’ve made up my mind” will be making its reappearance in a future crucial moment, whether to stand up to Homeworld (we could end up with an “end of season 2 Zuko” situation as well, but the way this line is seeded makes me lean toward brave refusal)…or as a bitter echo after defending Steven from something deadly. After all, for all the DBZ references bandied about, at this point Peridot and Steven are closest to a kind of Piccolo-and-Gohan relationship and that … well, Peridot needs to earn her stars somehow.

Ah, but I know what you’re saying, and the answer is “not yet.” We now have definitive proof that Peridot had no involvement in the fusion experiments, and equal proof that she has absolutely no problem with them. It slips by during active movement scenes, horrifying information delivered nonchalantly. And its placement is quite purposeful, I’d wager. To remind us that even if Peridot has warmed to Steven she’s still shaped by Homeworld’s views on a fundamental level, and that she doesn’t seem very motivated to change her thinking.

And Steven doesn’t comment, because in effect he can’t. He might love being part of Stevonnie, and his boundless compassion might well extend to the experiments, but he’ll always be one degree removed from the heart of the issue. He doesn’t live as a fusion, and he didn’t know any of the shards. It has to be Garnet who takes Peridot to task for her way of thinking. Steven might be there to form a bridge of communication between what’s likely to be “unstoppable righteous rage vs. defensive snideness,” but until then it’s a better fit not to tackle such an important character flaw in what’s already a packed episode.

Really, it’s amazing how much tension the episode wrings out of its second half even before the experiments arrive. Every moment they’re away from the house reads as a potential one where Peridot might run away, or use the available tech to betray Steven. And yet … the thought doesn’t even seem to occur to her. Part of this is no doubt because of her complete lack of physical prowess, and she continues to be pretty far from the applicable concept of “noble,” but it’s still a far cry from the immediate exit strategy thinking of her previous Earth-bound appearances. The little green rock’s going native. In which case, she’s better figure out what her weapon is pretty soon. Or at least how to dodge.

The Crystal Gems have been tragically sidelined this week—barring Garnet’s adorable goodbye and the patented Mom Tag Team in the episode’s opening—but it looks like we’ll have the long overdue talk next week. Supposedly, the Gems’ll be building new robots.

By the way, the Crewniverse released another short! This one’s about how Gems are made, and is mostly very cute confirmation of what we already know: mainly that Gems hatch out of the ground as fully grown adults, and that while they’re growing they leech all the nutrients out of the earth among them. No wonder Gems need so many colonies (on the other hand, they don’t seem to age or die of non-combat/shattering-related deaths, so …).

Hope to see you next week!

Vrai is a queer author and pop culture blogger; they’re currently trying to finalize some Peridoption papers. You can read more essays and find out about their fiction at Fashionable Tinfoil Accessories, support their work via Patreon or PayPal, or remind them of the existence of Tweets.