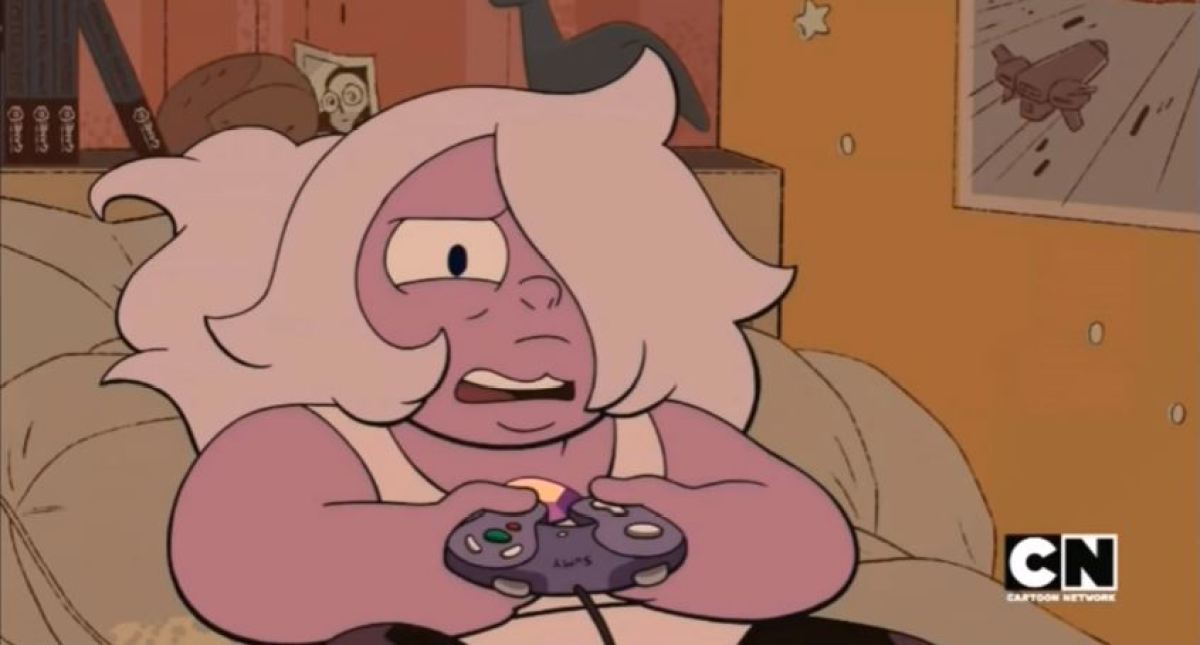 The Recap: Steven and Amethyst head into town to look for the runaway Ruby; but while Steven is worried about fixing everyone else’s problems, Amethyst is focused on making sure Steven is okay.

The answer to the question “why haven’t there been any Amethyst-focused episodes lately” is, apparently, “because she pretty much has things sorted out.”

For all the madcap shouting in this episode’s climax, it’s a surprisingly lowkey affair overall, and not in a bad way. If yesterday’s premiere rushed to smooth a few things over a bit too quickly, then this is the long breath to start sorting through the aftermath of what everything means for our characters.

Unfortunately there’s no way for a literal “talk about your feelings” episode to not get a little, well, talky; and despite the fact that this show has built a solid playbook for making long scenes of conversation visually appealing, there are still moments when this episode’s pacing drags because the script needs time to build up to a point—particularly the beach scene.

Once Amethyst loses patience, though, the wait becomes more than worth it, and on rewatch has a nicer sense of build working from her POV rather than Steven’s. The entire episode works based on prior knowledge of Amethyst’s character and growth—her initial childishness seems to be a regression to her early characterization and inability to deal with serious issues head on; except that her actions are consistently focused on Steven and distracting him from the drama at hand. She even tries to shed her usual brusque approach, when it’s clearly not working, to outright ask Steven how he’s doing—trying to communicate with him on his terms.

Even her initial refusal to talk about herself, a familiar plotline of Amethyst episodes past, is ultimately because she doesn’t want to put her emotional burden on a literal child who’s already suffering. None of this is a knock against Pearl and Garnet, who’re allowed to grieve over such earth-shattering events and whose arcs have been heartrending—but they’re also a pile of mess, and Steven needs someone who can actually be an adult and understand the complexity of Gem Stuff. And there’s a very necessary acknowledgement of Rose’s good intentions alongside her darker qualities that was missing from the prior one.

It’s smart writing, both structurally and from a character perspective, that rewards the audience for previous investment. Like “Falling Apart” it’s a somewhat visually functional but not overtly flashy episode, but that contrast serves to better highlight Amethyst’s triumphant monologue, shooting her from above as she stands with her feet planted and arm outstretched–admittedly small, but undaunted and prepared to take on the world. Yes, it’s as bald a statement of purpose as we’ve had for the show in a while, but in this case it’s earned both by the character’s natural earnestness and a side dollop of “certain lessons don’t come up enough in all-ages TV series, and it’s worth hammering them home overtly now and again.”

The theme for this run of episodes is beginning to show itself: closure. Pearl realizes that Rose truly loved her and that she did make her happy, which is part of being able to put the past to bed. Amethyst proudly declares herself the future and someone Steven can rely on, opening the door to a future that can build on what Rose did without being beholden to her mythic (and troubled) shadow. That leaves us with three more episodes and three more Crystal Gems: Garnet, Peridot, and Lapis.

Wrapping all of that up in one run of episodes is an extremely tall order, especially with emotional arcs that have spanned almost half a decade of real-time airing. So far we have one mixed success and one slam dunk, with the latter coming partly because it so readily divorced itself from a lot of the backstory until now. Which is on the one hand good, since this is partly a show about how to both honor and critically appraise a legacy. On the other, the writing has fashioned its various climaxes to now around secrets and backstory. If the goal is now to move on from that, where do we go from here?