Steven Universe Recap: "Too Short to Ride" | The Mary Sue 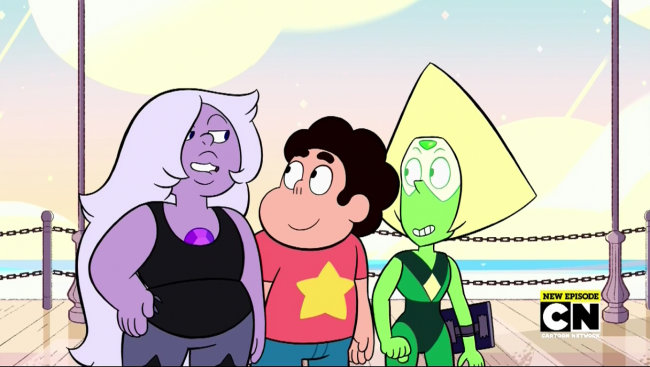 The Recap: Steven, Peridot, and Amethyst spend the afternoon at the amusement park and try to help Peridot activate her powers.

This show has mastered the art of a well-deployed guest voice. Peridot’s particular brand of manic energy tends to dominate any episode she appears in, so it’s pretty notable that it’s Mr. Smiley who walked away with the Best Line trophy (“I HAVEN’T SEEN A BED IN SIX DAYS”–it really feels like those words ought to be visibly shaking to convey the full stress of the situation). This is far afield of the meat of our discussion, but I sometimes forget to give kudos to SU’s secondary cast, who are giving their all and a big part of what makes the show’s world feel so vibrant and alive.

Anyway. About that Shorty Squad. Peridot has sort of become the millennial stand-in since her integration into the Crystal Gems: she starts out processing emotion through fictional media, she’s generally anxious about life and the fact that the plan laid out for her got completely thrown in the grinder, and she’s heavily reliant on technology. The Crewniverse seems aware of the value of restraint on that last point, thankfully; there’s no faster way to date a show than to make jokes to flash-in-the-pan fads, but “Too Short to Ride” is actually quite smart in getting most of its silly “Peridot vs. the Internet” jokes out via social media (Peridot took over Cartoon Network’s account and also has her own handle, operated by Lauren Zuke) while using the tablet instead as a brief window into Peridot’s thoughts. It’s a clever sidestep of a pretty common pitfall.

More than that, Peridot’s also the only new Gem who’s much interested in interacting with the human world–she’s sort of taken up Amethyst’s job from season one as the excitable outsider that Steven can be more emotionally mature than. It’s a necessary passing of the torch, because Amethyst’s grown up a lot. We got hints of how much she’d matured way back during “Steven’s Birthday,” but it’s absolutely heartwarming to see on display here.

Season one (and even two) Amethyst would’ve gotten in fight with Peridot about shapeshifting being stupid, taking the comment about “intended shape” in particular as a personal affront. Season three Amethyst shrugs it off and zeroes right in on the crux of the issue. She has officially graduated to the role of expert crux-finder. It’s one of those downright true to life conversations where something little suddenly throws a lot of hard work and growth into sharp relief.

Peridot has had her share of growth too, which made the question of why she never fought all the more conspicuous. This revelation that she was grown that way not (just) as a means of keeping her from rebelling but because of the issue of Homeworld’s depleted resources opens up a couple very scary questions for the Gems: on the one hand, it explains why Yellow Diamond hasn’t just sent in a fleet to wipe everyone out, and raises the odds that the Crystal Gems might survive a second battle; but it also makes Earth a way more valuable prize if someone like Blue or White Diamond decide to override Yellow’s vengeful tantrum; and, last and not yet important (though next week looks promising), it has a few potentially gruesome implications for why Homeworld might want a (mineral) resource like Jasper back, failed or no. I can’t imagine we’ve heard the last about “harvesting.”

The last third of the episode is given over to Amethyst and Steven trying first to teach Peridot (with a great throwback to the horror of “Cat Fingers”) and finally to just pull her powers out of her. I am ready to just have some copy-paste text at this point that just says “and Shelby Rabara was great,” because I sort of feel like a broken record at this point. But it’s true. Rabara has a particularly deft hand at making Peridot’s fears shine clearly through her sullenness and childish remarks. At this point she has a fully distinct register between “screaming tantrum” and “terrified shriek,” and the latter is particularly heartbreaking as Amethyst moves to take her tablet away.

Defining herself by her role is all Peridot has ever had, and this episode proves that joining the Crystal Gems didn’t cure her of that mentality–she just changed the role, becoming the Drill technician instead. Her constant declarations of herself as “the lovable Peridot” etc. are a good running gag, but they’re also sad, reflecting a fear of being discarded if she doesn’t constantly assert what value she adds to the group. That, uh…well, I said she was the pseudo-millennial stand-in.

Amethyst is right, of course, in saying that they value Peridot as she is and not what she might be or give in the future, but she goes too far in trying to completely cut off Peridot’s source of comfort, interface, and yes, contribution (while dismissing the very real value Peridot’s knowledge provides). Peridot needs to know she’s valued and valuable without her tech, but that doesn’t mean she needs to completely abandon it and adopt the ways of the much older Crystal Gems. It’s a matter of finding a balancing act within the team.

Hmm. I do believe I smell a metaphor.

A part of me was slightly disappointed to find the possibility of a completely muggle Peridot dispelled by episode’s end, but that would risk overlapping her role with Connie’s, and her having a unique set of powers plays too well into Steven’s role of redefining the expectations of present-day Homeworld. And it’s hard to begrudge the 1000% anime execution of the moment itself. Nothing like some good old anguish-activated superpowers.

Next up we have a Lars episode, which got me thinking about just how long it’s been since we’ve seen him. That’s for the best, I think. The distance is such that we the audience have had a lot of time to get away from his more awful traits, and he’s had time in-universe to grow, so now seems like about the perfect time to check back in and see what’s up. See you then!

Vrai is a queer author and pop culture blogger; they tip a fine how’d’you do to the one other JJHO fan who got that reference. You can read more essays and find out about their fiction at Fashionable Tinfoil Accessories, support their work via Patreon or PayPal, or remind them of the existence of Tweets.