Lars and Sadie: the trainwreck that never stops. 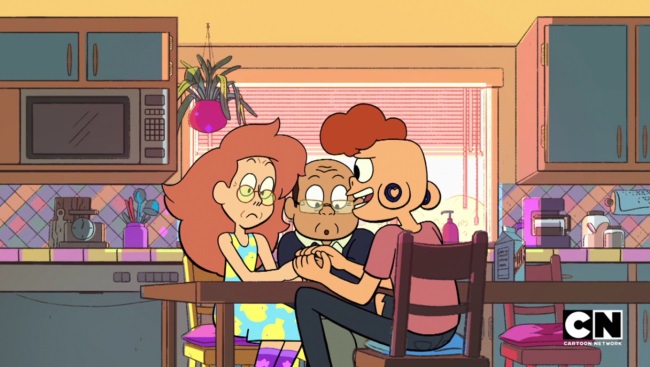 The Recap: Steven wakes up in Lars’ body and spends the day trying to “fix” Lars’ life, particularly his relationship with Sadie. This proves to be an exceedingly poor plan.

Well, it’s nice to see one thing remain consistent: another Lars episode is over, and I am buried under a small mountain of conflicted feelings. Everything about this episode screams at wanting to discuss adult issues, and with that, the likelihood that they’re playing a very long game. I can respect that–I do respect that–but the colossal gaps of time between when this storyline is revisited makes that slow, real-life pace very frustrating to watch.

Let’s take a minute and process the downright bleak picture this episode paints of how Lars’ life is going: he’s flunking out of school (presumably college if he’s the same age as Sadie), his parents are resigned to the inevitability of him becoming a criminal, the Cool Kids find him grating at best, and he has personally burned down what seems like one of two positive relationships he’s had in his life (the other being Ronaldo some time ago).

The script is really effective at painting a picture of someone who’s fallen into a vicious cycle, angry and withdrawn because of how his life is going and then letting that anger and bitterness poison his relationships and investment in anything that could get him out of that situation. Lars is a kid we’ve all met (and maybe even been at some point), probably depressed and thinking he can impress people by being dismissive and sarcastic.

Looking at his mother’s design and a few other factors (I’ve personally never heard “Laramie” given as a birth name for an AMAB person), I have my own theories about what might be motivating some of that anger, but for now we have to look at the present. And present day Lars is kind of an awful person, most obviously to Sadie.

The script is almost jaw-droppingly bold in how it uses Steven’s inexperience during his visit with Sadie (her movie collection speaks to me, by the way, and I too want to watch the campy gay werewolf love story). As open and accepting as Steven is of various kinds of relationships, he’s also completely out of his depth here. His mind hears that Lars likes Sadie and immediately jumps to marriage and kids and the whole darn thing. His completely innocent intentions turn the conversation into Sadie assuming Lars is trying to pressure her into sleeping with him while refusing to be seen with her. It’s a brutally realistic scene, one of those slaps of reality that the show does so well. I’m not sure it’s a slap that gets all the way through to Steven though, beyond the knowledge that he screwed up in some vague way.

It seems pretty clear at this point that Lars and Sadie are both going to be much healthier, happier people if they just cut ties with one another. Lars might be capable of becoming a compassionate adult, and he might really like Sadie, but he’s cruel to her and she’s not capable of standing firm against him. She might have feelings for him, but she constantly undermines herself out of an apparent fear that she might be completely alone without him in her life.

All of which leaves me somewhat uncertain of how to feel about the reconciliation between the two in the episode’s final moments. Steven’s learned that he shouldn’t meddle in other people’s relationships (which is a good line to draw right quick, if this whole human possession power is going to stick around long term), but he doesn’t seem to have learned much about this one in particular. And while I think the episode was encouraging the slightly nauseated feeling in the pit of my stomach at the knowledge that these two are still stuck in their rut, it’s vague and hard to say without knowing what the next move in the arc will be (and who even knows when that’ll happen).

Actually, “uncomfortable” sums up this episode pretty neatly. It’s clearly mindful of the implications of body-swapping tropes (Steven’s comment about respecting Lars’ privacy is really very sweet), and there’s sort of a mounting desire to stomp on the brakes with every word that comes out of Steven-Lars’ mouth, knowing it can only make the snapback worse. The final race to the temple is downright agonizing. It’s a weird tone compared to most of the show; if that’s as intentional as I suspect, I think I’ll be mulling over it for a while.

It wouldn’t be right to leave off without highlighting Matthew Moy’s performance. Body-swapping episodes are usually an opportunity to show off an actor’s range, and Moy is great at channeling the brightness of Zach Callison’s voice and the candor of his speech patterns (and kudos to Molisee and Villeco too – it’s impressive what little things like posture and unusually widened eyes can do to affect how we see the character).

Tomorrow sees the return of Kevin, who first showed up in “Alone Together.” Which also means…well. I guess we’ll just have to wait and see.

Vrai is a queer author and pop culture blogger; it’s beginning to sink in that this is week one of four. You can read more essays and find out about their fiction at Fashionable Tinfoil Accessories, support their work via Patreon or PayPal, or remind them of the existence of Tweets.