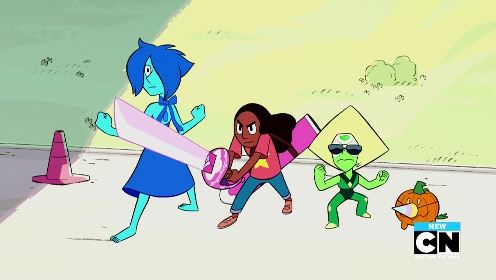 The Recap: Connie fills Steven in on what she, Lapis, and Peridot were doing while the others were on their mission at the zoo.

I find myself wanting to be angry at this episode in spite of the fact that it hasn’t really done anything wrong. Its only sin is doing due diligence in going through the beats of characters who’ve never really interacted, before offering a tantalizing glimpse of what we all really wanted in the very last moments. This is not the show’s fault. But boy did it leave me depressed.

The feeling might be coming from the writing end of things – while Molisee and Villeco have written comic Peridot episodes before, including the slapstick “The Kindergarten Kid” and a collaborative hand in parts of “Gem Harvest,” they’ve never really worked extensively with Lapis and Peridot as a duo. The best moments those two have had have always been under Florido and Zuke, the latter of whom has been open in talking about writing them as a slow-burn romance. And they’re still initially a team against Connie that breaks down into equal discomfort on all sides pretty quickly, especially as they descend into bickering (take, by contrast, the clearly established warmth and banter like the moment the two share in the Florido/Zuke “Beta”).

It’s the first time I’ve really felt myself longing for what another writing duo might’ve done with an episode prompt, which is ultimately a compliment to how well the team knows its own strengths. We’ve discussed before how several of the episodes of the last Bomb felt like conscious efforts to push the writers beyond their wheelhouses (see the “Steven’s Dream/Adventures in Light Distortion” recap), so it’s possible this is going to be a trend for a little while, to the purpose of ultimately making the show stronger and more versatile. And in the meantime, bemoaning what could’ve been is far less useful than dealing with what is.

In spite of the paragraphs I’ve spent up to now, this is far from a bad episode (though for what it’s worth, it’s the strongest case of secondhand embarrassment for the characters I’ve ever gotten while watching). The voice actors particularly feel like they’re having fun: Grace Rolek gets to take the lead for the first time in far too long, while Rabara and Paz both get to whip out their best Estelle impressions. And the fact that the stakes are as low as “scaring townsfolk at the car wash” means there’s more time to let the characters breathe on figuring out their dynamics. And also allow for the occasional excellent sight gag – of all the things, Peridot, THAT’S what you wanted to revisit the bathroom for?

On that subject…yes, of course Peridot thinks that the only way for them to be the Crystal Gems is to BE the Crystal Gems. In spite of switching sides, she still thinks in terms of rigid role-based structures because of her life on Homeworld. And of course Lapis is mostly willing to just let Peridot tire herself out and roll with it, because that’s a big part of what makes their dynamic work. Connie’s easy agreement to this plan might be the saddest, giving us a hint that there’s still part of her that doesn’t quite feel like a “real” member of the team, as the only full human who fights.

This is definitely an episode that we needed before we can see these three work together in the future – and what a glimpse of the future we got, if only for the few seconds that they plan out how to fix the mess they made. Which is a touch harder to be contented with while knowing that it could be months and months before we get a chance to see those characters interact again, especially with all the plot events now set up to come down the pipeline. This is the tradeoff of having a cast as vibrant as SU’s: even now as we cycle into another “check in on Beach City before the next cataclysmic event” run, there will always be more stories to tell than there is time.

“Please hold off the plot a little longer to focus on these shenanigans, SU.” A sentence I never thought I’d type (and I suspect there was a monkey’s paw in the room while I did so, because week after next we’re looking at the seasonal Ronaldo episode). NEXT week, though, is “Storm in the Room,” which I suspect will hold more of Steven grappling with Rose’s legacy and possibly following up with what he glimpsed of the Diamonds. Hope to see you there!

Vrai Kaiser is a queer author and pop culture blogger; they just REALLY wanted to see those three solve crimes, is all. You can read more essays and find out about their fiction at Fashionable Tinfoil Accessories, listen to them podcasting on Soundcloud, support their work via Patreon or PayPal, or remind them of the existence of Tweets.