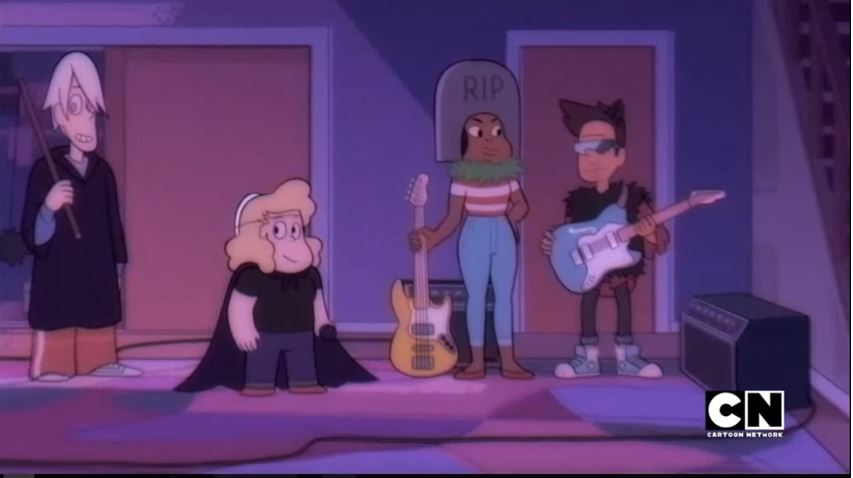 The Recap: Steven films a documentary about Sadie and Killers as they find a manager (Greg) and begin their climb to fame.

It’s hard to be mad at more Beach City episodes when they’re as healing as this one. Characters like Sadie and Greg have had a rough time of it over the series, and it’s nice to spend eleven minutes watching them succeed while Sadie navigates the complicated emotional territory of both wanting her own space as an adult while realizing that she still wants her mom to have a place in her life.

Its lowkey intentions are on the table from the word go, as Buck monologues about the band’s inevitable descent into turmoil and creative differences only for Greg to assure him (and us) “that’s not going to happen.”

“We’re all going to have a nice time for like a minute, okay? People have been dying and it’s stressful but these characters are doing okay. Also we’re going to have an episode with Ronaldo so like, strap in for that.”

….The downside is that all of this makes the episode a little bit hard to talk about in much detail beyond “it’s nice and these characters deserve to have a good time.” Amber Cragg is melding well with the writing team—the sense of quiet disappointment and small, unspoken stakes characterizes her other two episodes so far as well (“Raising the Barn” and “Kevin Party”), which is enough evidence to start noting it as a favored motif.

Her collaborations with Florido have a markedly different style from when Lauren Zuke was on the team. While the former duo’s episodes were known for their focus on visual gags and an occasionally manic edge, Cragg brings an almost deadpan energy to the table. It fits the show’s turn toward a more somber consideration of growing up and the slow nudge toward a final confrontation … if we ever get there.

Beyond that, everything on display here is comfortably within the show’s wheelhouse. There’s the old-school camcorder aesthetic that lets the script jump around from scene to scene in order to create a full build in 11 minutes. The Cool Kids are still chill and earnest in the same endearing way they’ve always been, and Sadie’s still worrying about the fact that her mom’s harmlessly embarrassing but trying to be less overbearingly invasive. (One imagines that moving out would cure a lot of these problems, but being in a basement band isn’t exactly super lucrative.) There’s a short song at the end with charming visual effects, and Sadie’s love of horror everything continues to be endlessly charming. None of it’s new, but all of it is well executed.

The only real concern is the possibility that this is increasingly setting Beach City Episodes on parallel rather than interwoven tracks to Space Episodes. Nothing in this necessarily necessitates bringing in the big overarching conflict, but it’s the same old problem the show keeps running into: yes, these problems are nebulous and far off, but WE know they’re going to come to a head eventually; so while it’s natural that the characters would go on living their lives in the meanwhile, it can often feel like it lacks a sense of urgency. Especially with a big name like Pink Diamond on the horizon.

Next time is a Garnet-focused episode, the first in a while. We’ll see how the plot integration issue is doing then.