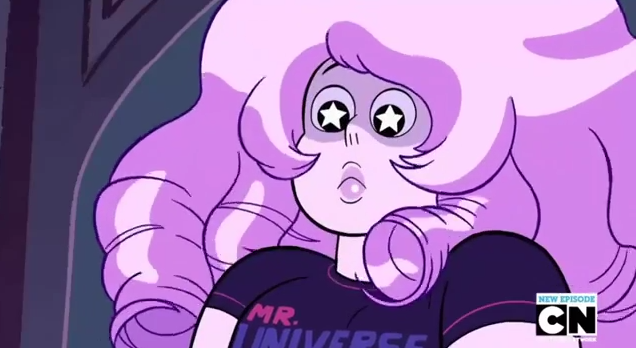 The first draft of this recap was done entirely in tearstained caps lock. Prepare accordingly.

The Recap: Greg tells Steven about his first meeting with Rose (now with Marty). It seems Mr. Universe was so starstruck that he gave up his musical career just for the chance to get to know that Mysterious Giant Lady.

Not a whole lot happens in this episode, really. Even the conflict that incites the telling of the story is nearly an afterthought, so much so that Steven’s apparently been hearing this story for years without it. It’s a meet cute, so what.

Everything, that’s so what. This is the sort of episode that proves the depth and vibrancy of the world (my immediate mental comparison was Adventure Time’s “I Remember You”—and maybe “Gold Stars”—a simply plotted character check in that sends out emotional ripples based on prior knowledge). Which is, on the one hand, great fun as a fan; on the other, it gives your recapper a bit of a puzzle for topics beyond “hey, did you notice that Easter egg.” Nonetheless, we endeavor.

So, before we get to that egg hunt, let us indulge a minute in the meat of things: one Greg Universe. Even from the beginning he was an unusually endearing version of the “bumbling dad” archetype, a sterling bit of writing that insisted that having a bit of a dead-end life (the failed musical career and all) was no reason not to be a strong emotional support system for his son. “Maximum Capacity” added another layer deep to that, reminding us of Greg’s lingering grief over Rose and (notably, in the episodes that followed) his ironclad determination not to let that grief hurt his relationship with Steven. And now we have this. The knowledge that Greg didn’t fail to “make it” but instead chose to give up professional music to pursue love at first sight (and boy is it a mark of SU’s writing that I was not one whit tempted to roll my eyes at that) is heartening from a character perspective. It’s also doubles as a potent little theme for the millennial viewers in particular.

As many shows as there are now highlighting the difficulties of The Artist Lifestyle, those series always have a vague concept of success as the main goal—a single work that changes the world, comfortable fortune, a traveling life of excitement, whatever. Those things are always the carrot on the end of the stick, no matter how much more prominent the heartaches become. And if the big artistic dream doesn’t work out… well, then that character is the sad, bumbling loser. Meanwhile in children’s media, giving up on the dream for a love interest generally just means that you’ve passed a secret test of character and the universe will now grant you both. But Greg didn’t “lose” anything. He looked at the state of his life, at the way the people he was around treated him, and decided that something else was more important to him. He didn’t give up on music, since his love for audio and composing carries forward into the present day, and there are days when he seems wistful for his musician days, but he never seems to regret choosing Rose. That’s not even on the table. And that’s important.

We tell kids that only a small percentage of artists are (across all mediums) are able to support themselves only from their art. What we don’t emphasize is that they’re not failures if they don’t become one of those success stories (while we hold up the wunderkind success stories), or if they lose interest in their artistic passion, or just decide that they want to keep doing the thing they love as a hobby. Those choices are all legitimate, and it’s wonderful to have a character (especially a male character) who’s grown up happy to have chosen a family over his career. Full-time parenthood and a family isn’t “losing” anything, if that’s the person’s choice (and the pointed excellence of the “women are people” conversation goes without further comment, doesn’t it?).

They don’t even imply Greg would’ve been a failure had he stuck with the rock star thing. I mean, his manager is a terrible, toxic waste of space but Greg’s got skill in that 80s-power-ballad kind of way. More importantly, he’s genuine when he sings. “Stronger Than You” set a high, high bar for the show’s musical set pieces, and “Like a Comet” meets those marks pretty handily (the show’s best work is shaping up to be these small musical character portraits)—that earnestness almost leaks through the screen, and it’s hard not to get caught up with the sweeping visuals (I know they were likely trying to evoke a general hair band aesthetic, but man did that sequence take me right back to my ill-advised Gravitation days, right down to the “grab the mike against the flaring stage lights” shot). If we weren’t sure before, those couple minutes give us a crystalized idea of who Greg was and is: a passionate, honest person who chases his goals with everything he’s got, and puts all of himself in to taking care of what he loves.

Now, because we are nerds and this is what nerds do, how about that minutiae?

Vrai is a queer author and pop culture blogger; if they had a dollar for every animation hiatus they’re enduring, the Corrupt a Youth program would probably be going a lot more smoothly. You can read more essays and find out about their fiction at Fashionable Tinfoil Accessories, or remind them of the existence of Tweets.