We can still believe in Steven. 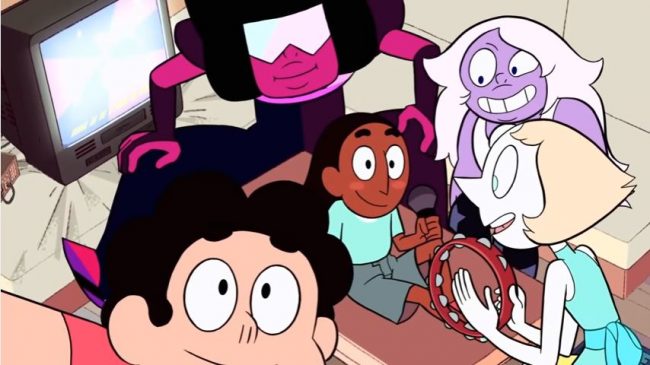 Steven Universe isn’t actually back until next week. But I know I could use a reminder that there’s good in the world, and I figure all of you could too. So we’re coming back a little bit early to talk about the shorts released a few weeks back, which collectively make up the runtime of an average episode.

These shorts are all connected by themes of communicating through video–either for an unseen audience on the internet or in the future, or as a means of reaching people from far off directly. Still, they’re also pretty self-contained, so we’ll break with the usual format and try to talk a little about each of them, one at a time.

At this point, a Lion short is just expected when a new batch comes around–he’s been around since the earliest crop, after all, as a go-to source of cute cat things (…uh, kinda). What’s most interesting about this short is how it plays on the line of being a practical how-to guide in addition to a parody of internet videos. There’s still that little bit of disconnect–on the one hand, Steven DOES have the kind of mom-ish tendencies that would nudge him to tell any kids listening to ask their parents for help, but it’s also a fairly standard butt covering from execs on high–but it comes the closest of any of these shorts to bridging the gap between Steven and us as the audience.

We so rarely get to see Connie interact with any of the Gems besides Pearl, and this feels like a direct answer to that sad bit of oversight. It’s gratifying to see that even though Connie is still holding herself at a little bit of a distance (it’s only temporary shyness, but that’s still born out of a lingering fear of being rejected in some way), she’s already been accepted as a member of the family. It’s been so long since we got to see our heroes take an uncomplicated breather. I don’t know why they were filming this, but I now choose to believe they have these karaoke parties every week, because Beach City is not a great place to be right now.

So this one is two minutes of pure meta joke using longstanding series meta joke Crying Breakfast Friends. But two minutes is about the right length for that kind of thing–wink and nod, but not terribly belabored. And I often wonder if this is indeed exactly how Steven Universe looks to the outside observer: lots of people crying over OTHER people crying, frequently and seemingly for no reason. I refuse to admit I’m trying to glean future plot developments from this metaphor.

The series proper hasn’t checked in with Lapis for a while, and it seems like she’s really leveled out since gaining Peridot (of all rocks) as a support system. It makes it unexpectedly rough to see the return of her PTSD and steely determination when she thinks Steven’s in need of saving, even if it’s played for comedy. Turns out that whole box of issues isn’t so much resolved as dormant, waiting to be triggered. Like when she unexpectedly started batting the Rubies around to protect Peridot, Lapis remains the Gems’ secret but unpredictable weapon. She still very much comes across as the type who could act against the Gems in the right circumstances (i.e. if following through on a mission meant letting Peridot or Steven be seriously hurt).

Meanwhile, “Gem vs technology” jokes have yet to get old; Peridot’s computer might make downright ancient dialup noises, but the video chat connection woes are 1000% realistic. Lingering question: Greg is rich now, but Steven doesn’t have his own laptop? I suppose there’s not necessarily a need, since he has a smartphone and was homeschooled.

Despite being arguably the most unassuming short of the bunch–no Gems, no Lion, no show within a show, just Steven and a guitar–this one’s the powerhouse. Maybe more now even than when it came out those few weeks ago. There’s something intrinsically heartbreaking about the fact that Steven can’t talk about these things to the people around him, not because they don’t care but because it’s so complicated by their own wounds and worries. So he’s talking to us, the audience. Strangers. But at the same time, it’s communal in a way only new media can be.

Yeah, most of the song is quite specifically about space rocks, and about the burden Steven’s carrying both in wanting to live up to Rose and clean up the messes she left behind. But it’s also a song for everyone. It’s about acknowledging all the things that are scary and hurtful and hard but refusing to be beaten by them, even if you’re only holding on by the tips of your fingernails. We get to see Steven feel a little bit of catharsis, which he’s more than earned…and go straight into offering solidarity to the viewer. It’s a beautiful, powerful little short.

And maybe I am granting it extra weight that wasn’t necessarily intended–certainly Liu couldn’t have known we were going to end up here–but that’s what media’s for. To inspire us to hold on, and take on new meaning as we need it to. So, yeah. I’m going to paraphrase this good magical boy for a minute here.

Vrai is a queer author and pop culture blogger; they plan to survive the next four years through the power of spite. You can read more essays and find out about their fiction at Fashionable Tinfoil Accessories, listen to them podcasting on Soundcloud, support their work via Patreon or PayPal, or remind them of the existence of Tweets.